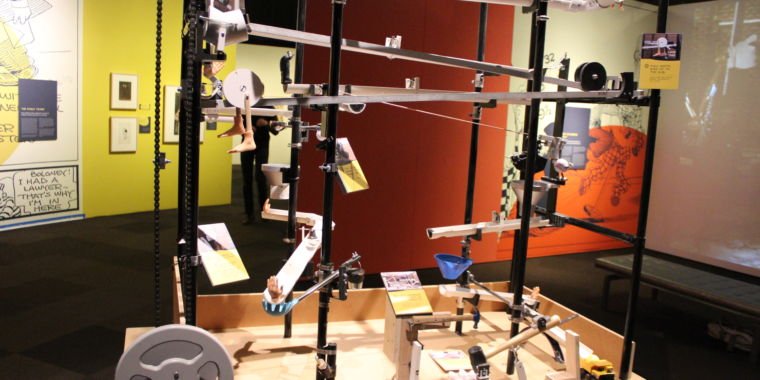 SEATTLE – When most Americans think of the dawn of the tech age, they probably think less of specific devices or factories and more of one pop culture icon obsessed with it: Rube Goldberg.

While his name is synonymous with intricate constructs used to facilitate simple tasks, the early 20th-century cartoonist never actually built one of his world famous ‘Rube Goldberg machines’. This irony is explored in depth in a new museum exhibition called The Art of Rube Goldberg. Seattle’s Museum of Pop Culture (formerly the EMP) took a first look at the collection’s world premiere. The exhibits tell a story fans of OK Go music videos and Pee-Wee Herman movie sequences may not know: the work of a sports-obsessed cartoonist who struck pop culture gold with a different kind of sketch.

The Art of Rube Goldberg is largely about cartoons and cartoons. As such, it chronicles Goldberg’s career in both elaborate, full-page comic strips (which never quite reached the level of Krazy Kat or Little Nemo) and political cartoons (whose clunky, overwritten treatments certainly read like an engineer’s stuff). Goldberg’s breakthrough came when he started drawing crazy machines – attaching them to characters like Professor Butts to help them perform humorously simple tasks, like reminding him to write a letter to his wife or fix his eyes on a golf ball. during a swing. The public ate ​​these wacky sequences, and Goldberg turned to work on merchandise and artwork for advertisements (all of which are featured in the Seattle exhibit).

Unfortunately, this world premiere exhibition is very lacking in reality machines to play with; there is only one major piece of equipment at hand (pictured above) along with play tables that kids can use to build their own simple doodads. But as a combination of an old sketch store (many of which are captured in the gallery below) and sociological examination of Goldberg’s career, the exhibit is nonetheless fascinating.

The Seattle exhibit is underway. No closing date has been set.