Rogue One is a different kind of Star Wars movie, and that’s a good thing |Techilink 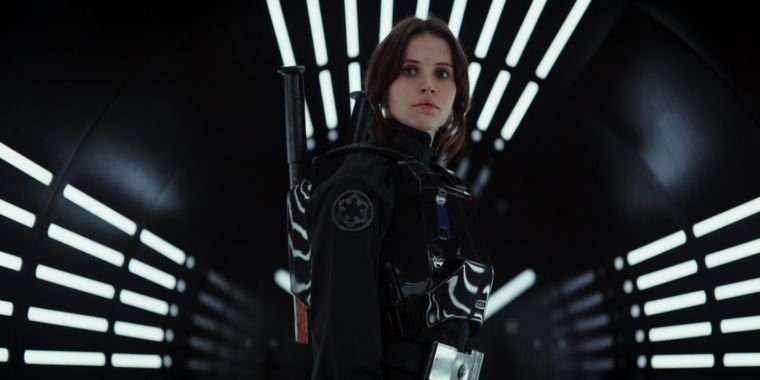 This review contains minor spoilers for Rogue One: A Star Wars Story. If you care about that sort of thing, come back after you’ve seen the movie or proceed with caution.

It is a period of civil war. Rebel starships, attacking from a hidden base, have won their first victory over the evil Galactic Empire.

During the battle, Rebel spies managed to steal secret plans for the Empire’s ultimate weapon, the Death Star, an armored space station with enough power to destroy an entire planet.

Those lines are from the opening crawl of the original Star Wars movie that was released in 1977, before a ten-year mega franchise emerged from it and even before it picked up the “Episode IV” tag implying we were picking up mid-story. The opening crawl of each Star Wars movie is a quickie seating arrangement, kind of a lazy but efficient way to set some bets so it can get us into the action.

Rogue One is the movie version of those two paragraphs. But more importantly for the franchise, Rogue One start the real beginning of Disney’s attempt to change Star Wars from a traditional franchise that tells one big story to a Marvel-esque money printing machine that spins a web of smaller interconnected stories that come out once or twice a year.

The good news is that Rogue One is a largely successful attempt to tell an interstitial Star Wars story, one that in some ways is even more powerful than the main entries as it really has to roll in the blood and dirt. But it is also the reverse of The power awakens. Where Episode VII immediately gave us memorable characters in a movie that suffered for so meticulously reworking the storylines and emotional beats of A new hope, Rogue One gives us a more compelling story populated by characters who would benefit from a little more breathing room.

Rogue One falls into that 20-year gap in the franchise’s timeline between Episodes III and IV. The opening scene, set in the following years Revenge of the Sith, introduces us to Galen Erso (Mads Mikkelsen). Galen used to be a brilliant Imperial engineer who helped set up the still-secret project that will become the first Death Star, but his conscience takes over and he leaves to live in seclusion with his wife Lyra and young daughter Jyn. However, the project has stalled and Galen’s former colleague Orson Krennic (Ben Mendelsohn) has come to ask him to rejoin the Empire.

Unfortunately for the Erso family, the request is not optional. Galen is taken, Lyra is shot and Jyn hides and is left in the care of a family friend.

Rogue Onethe main problem isn’t that any of these characters are bad or unappealing or that they’re poorly cast – each performance is solid to excellent, and Rogue OneThe cast has more diversity and representation than anyone else Star Wars movie so far. It’s that they’re only sketched out vaguely before we fully dive into the action, and that action only occasionally lets in enough to allow for character building. “I’m the pilot,” says a dazed Bodhi as he introduces himself to the others, and unfortunately we don’t go into much more detail about most of these characters than that.

The relationship between Jyn and her father is effective because the story’s beating heart and emotional beats all manage to land, but Rey, Finn, and Poe all have undeniably better chemistry as characters – I highly doubt anyone has a Rogue One characters just as much as they send Finn and Poe.

Star Wars from the trenches

Those issues aside, the film gives us a dramatically different window into the familiar Star Wars universe – we get this through the eyes of characters who are in the trenches of the rebellion rather than just the people leading it. We see fighting in the streets of a city under imperial control; we see the divided, fruitless leadership of the rebellion struggling to decide what to do in the face of a terrifying unified empire; we don’t just see classical Star Wars air battles between TIE Fighters and X-Wings, as well as chaotic guerrilla attacks on a tropical imperial planet strongly reminiscent of the Vietnam War. And the combat gets about as brutal as you can get with a PG-13 rating; this doesn’t even look like the sterile, silly teddy bear attack on Endor.

It’s those moments and perspectives that make the film worth watching, and while Rogue One is nice on the surface as a fast paced action sequence sequence, it is also a poignant political statement (despite Disney’s protests to the contrary). The film celebrates those who take action rather than watch, both from outside the system and from within – the latter is possibly even more important, as it is more dangerous and often turns those fighting from outside the system against you. And it’s especially hard for people whose impulse is to run away and hide or accept ugly things in the name of muddling through.

“It’s easy when you don’t look up,” Jyn tells Gerrera when asked how she can stand living under the Imperial banner, and Whitaker really sells the public the emptiness of that perspective.

But more than anything, Rogue One‘s tone sets it apart from the sometimes deliberate campiness of the main series. This is not a hero’s journey. Not everyone is allowed to hold a parade or stand on the podium to receive their medals. Sometimes there is no way back home. Rogue OneIts greatest success is that the uprising feels as important and desperate as we have always been told.

I can find nits to choose from. Michael Giacchino’s score is largely unmemorable, except for short repetitions of John Williams’ well-known anthems. And as good as some of the recurring performances and crazy one-off callbacks are – the ever-great Jimmy Smits reprises his role as Episode III’s Bail Organa and James Earl Jones returns briefly to play Darth Vader at the height of his ruthlessness – the film distractingly recreates two prominent recurring characters with CG models clinging to the edge of the eerie valley. Disney has recast Han Solo and Lando Calrissian for an upcoming prequel, and I prefer that approach to digging up and aging actors from the original movies.