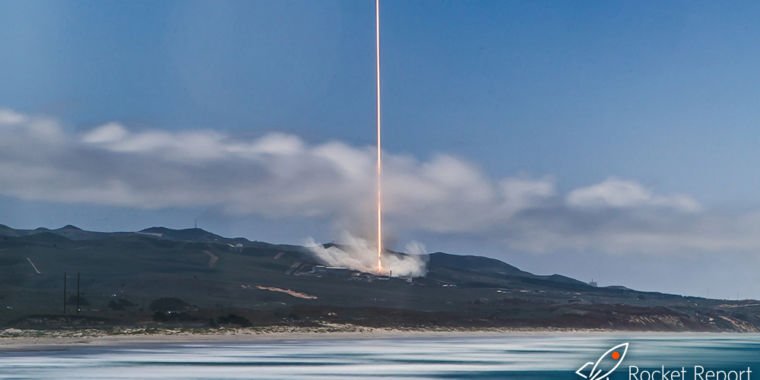 Welcome to issue 1.25 of the Rocket Report! There is some very interesting news out of Russia this week, with a possible revival of the Sea Launch platform, concerns about shoddy work at Russian space companies and Kazakhstan’s choice of a Falcon 9 launch.

Stratolaunch test fires PGA engine preburner. For the first time, on Nov. 2, the company fired the preburner for its PGA engine at Mississippi’s Stennis Space Center, Space News reports. The pre-burner acts as the smaller of two combustion chambers in a staged combustion engine. “This is the first step in proving the performance and highly efficient design of the PGA engine,” said Jeff Thornburg, vice president of propulsion at Stratolaunch.

Still targeting a flight in 2022 … Earlier this year, the company announced its plans for the engine, which uses liquid oxygen and liquid hydrogen fuel and has a thrust of 200,000 lbf, to power a family of air-launched rockets. A first “Medium Launch Vehicle” will be able to place 3,400 kilograms in low Earth orbit, with an initial launch planned for 2022. (Submitted by BH and Unrulycow)

DARPA Continues Responsive Launch Competition. DARPA has identified eight locations in the United States that it plans to use for a commercial launch competition, a selection that Space News says addresses one of the biggest concerns of potential competitors. The competition requires companies to conduct two launches from two separate locations spaced weeks apart, with the specific launch location and payload for each launch being provided at short notice.

Choices from Alaska to Florida … The launch sites include the usual suspects, as well as relatively new locations such as the Naval Outlying Field on San Nicolas Island, off the coast of California. DARPA also announced on November 6 that 18 teams had passed the first stage of the competition, a pre-qualification stage. (submitted by Ken de Bin)

A proposed spaceport in the Azores appears to be popular. A spaceport concept on the southernmost island of the Azores, Santa Maria, has received 14 formal proposals from international space consortia, Portuguese news site Expresso reports. Contracts for the development of the site can be let in 2019, with the first launch tentatively scheduled for 2021.

A diversity of interests … Among those reportedly interested are industry heavyweights such as ArianeGroup and Roscosmos, as well as some emerging US commercial space companies such as Sierra Nevada Corporation and Virgin Orbit. The Portuguese government had expected only four respondents. (submitted by Nuno Pereira)

Must be reusable … S7 Space is considering several ways to recover the first stage of its future reusable rocket after launch. “On the list of likely options, we have a hypersonic parachute that can withstand return heat, or special wings. We will make a decision during the design phase as a result of more precise calculations and research,” he said. A private company has no chance of surviving in the market without a reusable missile, Sopov told Russia’s news agency. (submitted by Unrulycow)

Air Force Tests Minuteman III Missile. The weapon, with a counterfeit warhead, was fired from the underground silo at Vandenberg Air Force Base at 11:01 p.m. on Tuesday. For the test, the military attempted to track the counterfeit reentry vehicle as it traveled to a predetermined target location. “Although the reentry vehicle reached its intended target, the testing and analysis data is not public,” Joe Thomas, a spokesman for Louisiana-based Global Strike Command, told Noozhawk.

No further details … The military would not give further details of the test. The Air Force conducts approximately four Minuteman III missile tests each year from Vandenberg to gather information about the accuracy and reliability of the weapons system. The final test, on July 31, ended prematurely when Vandenberg personnel sent a self-destruct command due to a non-specific anomaly noted during the flight.

So what’s the relevance to launch? … You may have noticed that there are many rocket companies with hugely ambitious plans to change space. Certainly, returns to investors are closer in the launch business than in asteroid mining. But Planetary Resources’ failure should nevertheless serve as a cautionary tale. (submitted by Alex Altair)

Decision made on price … “The reason for using a Falcon 9 for this launch is that it will be less expensive,” said the press secretary of the Ministry of Defense and Aerospace Industry, Aset Nurkenov. The satellites will fly on SpaceX’s SSO-A rideshare mission scheduled for November. The unveiling is notable because Russia’s main spaceport is the Baikonur cosmodrome in Kazakhstan.

SpaceX rehearses helicopter-assisted landings. In the unlikely event of an astronaut’s medical emergency, SpaceX outfitted its salvage ship, GO finder, with a medical treatment facility and a helipad in the center of the ship. Recently, the company completed the helicopter landing and patient loading rehearsals on the ship, which involved training the helicopter to pick up astronauts and fly them to a nearby hospital.

more typical … In a normal scenario, Crew Dragon will splash down off the east coast of Florida. GO finder is equipped with a crane to lift the capsule out of the water and onto the main deck of the ship. Doctors from NASA and SpaceX will work together to evaluate the crew aboard the ship. From there, GO finder heads to Cape Canaveral, Florida, where SpaceX teams will transfer the astronauts to a nearby airport for transportation back to Houston. (submitted by Ken de Bin)

Rogozin not happy with “dirty” space facilities. The Kommersant newspaper received a copy of a directive that Rogozin has issued to the leaders of companies and facilities serving Roscosmos. The aim of the letter, the paper reports, is to help the companies eradicate “poor production culture and negligent attitudes by staff to their jobs.”

Shabby maintained workspaces … “The site has not been cleaned for years – in many places construction waste and roads have been torn up,” his letter reads, according to a translation in Ars. “Employees at such companies have become accustomed to normal conditions, and this creates a habit of poor production culture and sloppy attitudes towards work.” The letter follows high-profile issues with the last two manned missions launched by Roscosmos, MS-10 and MS-11.

Share supplies …By producing solid rocket booster segments for the Space Launch System rocket and for the Omega rocket, Northrop says both launchers will save money. “We see Omega and SLS as very synergistic, and I think NASA is starting to see that as well,” said Mike Laidley, vice president of Space Launch Program for Northrop. “They are starting to see the benefits of Omega paralleling SLS and the money that can be saved on SLS.” It should be noted that we have not yet seen tangible evidence of cost savings for the SLS program (submitted by BH and Ken the Bin).

SpaceX plans to adapt a Falcon 9 upper stage for BFR testing. As early as June of next year, SpaceX will attempt an orbital flight of a reusable version of a Falcon 9 upper stage to test technologies for the company’s next-generation launch vehicle. Space News summarizes the proposal, which Elon Musk discussed on Twitter.

There are still some questions … The second stage will not land propelled. “I think we’ve got a handle on propulsive landings,” Musk said later, reaffirming that the company is building a “BFR development vessel” intended to test landings at the company’s South Texas spaceport. It is not clear whether this will be a one-off test or become an operational phase for the delivery of payloads on the Falcon 9 rocket. (submitted by Unrulycow)