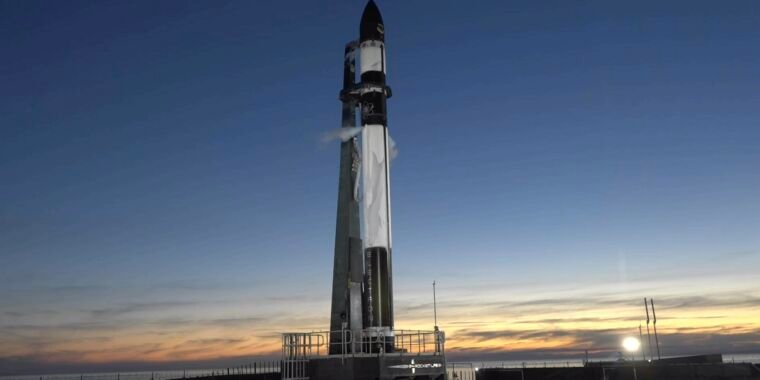 Rocket Lab said Thursday it will attempt to restore the first stage of its Electron rocket for the first time with its next mission, scheduled for mid-November.

This move follows a series of tests in which Rocket Lab has been working towards a full recovery. During these earlier tests, engineers deployed first-stage parachutes at maximum load and collected data as two previous rockets reengaged through “the wall,” what the company calls the high heat and pressure of reentry at supersonic speed.

The company’s founder, Peter Beck, said on a conference call with reporters that he wasn’t sure what the company would fish out of the ocean. It could be a nearly intact first kick or, he admitted, “a smoldering stump.” The key to this test, he said, was collecting data about the parachute system.

Beck announced the company’s plans to begin using its small Electron rocket just over a year ago, saying the goal was to effectively double production of the vehicle in light of demand from the industry. customer. “We are seeing production lead times getting shorter and there is now a stage coming out of the factory every 30 days,” he said. “But really, we can’t keep up with the demand from our customers.”

His engineers developed a plan whereby the first stage would be launched and separated from the Electron second stage, as normal, at an altitude of 80 km, and then use the thrusters of the reaction control system to reorient the vehicle for reentry, with the engine part first. Unlike SpaceX’s Falcon 9 rocket, the nine engines of the first stage on Electron will not fire. (SpaceX is the only company to successfully restore a first stage.)

As the Electron rocket descends lower in the atmosphere, a drogue parachute is deployed, followed by a main parachute. If all goes well, the rocket should splash into the ocean at less than 10 meters per second.

At least that’s the plan. With the upcoming mission called “Return to Sender”, the company will then retrieve the vehicle from the ocean and return it to its factory in New Zealand to see what condition the first stage is in.

“Parachutes aren’t trivial things to get right,” Beck said. “If you throw a piece of fabric just below the speed of sound, it’s always kind of interesting. I won’t be nervous anymore when we get it back to the factory.”

The company will likely need to refine Electron’s hardware and software, Beck said, and this should improve future recovery efforts. Once the company is able to restore the first stage in its entirety, the final step is to capture the vehicle in mid-air using a helicopter – this will prevent water damage to the vehicle from the ocean. The company has already successfully practiced this maneuver by capturing a simulated rocket stage using a helicopter.

“I’m sure there will be a lot of work on heat shields and different bits and pieces that we need to get right,” he said. “Once we get to the point where we have something that’s in a state that we really care about not getting wet, we’ll start bringing in the helicopter.”

This may take several flights, but the company has enough commercial missions to test this technology. Beck said the cost of Electron’s payload to include a parachute, heat shielding, response control systems and other measures is only about 15 kilograms.

The “Return to Sender” mission will deliver 30 small satellites into various orbits, and the two-week launch window opens on November 15. The recovery attempt down will take place approximately 400 km from the launch site, in the Pacific Ocean.