Rising Sun – A cerebral board game of conquest, diplomacy and betrayal |Techilink 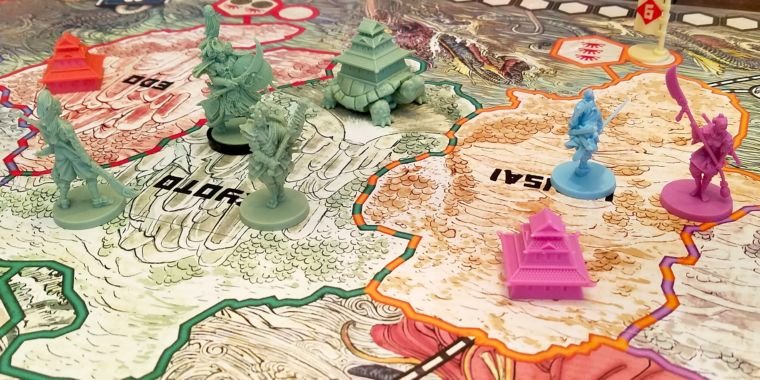 There are two kinds of people in this world: those who worship seething anger (read our review) and those who haven’t played it. (We kid, mostly).

seething anger, released in 2015, established Eric Lang as one of the foremost modern board game designers. Driven by a deeply rooted Norse mythology, the game refined some of the concepts Lang originally explored in 2009 Chaos in the Old World.

Now Lang is back with his latest territory control game, a socially charged game of blood, honor and finely sculpted plastic. It is called Rising Sun. And it’s great.

Rising Sun cares little about history. It throws quite a bit of its feudal Japanese setting in your face – there are Daimyo, Shinto priests and even Kami gods. There are also twisted dragons, along with legions of Oni towering over the battlefield, severed heads dangling from their belts. The fantastic setting is beautiful, though it gleefully simplifies the culture it portrays, swapping the names of hard-to-pronounce regions for those easier to say in English. (The game’s “research” apparently included mining Wikipedia entries for fake “Japanese” mythological monsters– not a great sign.)

But Rising Sun sits comfortably in his shoes. It does not pretend to be a simulation and instead presents a streamlined area control design with a backbone of negotiation. As a game based on having the most victory points, it does a great job dressing the affair with exceptional visuals and dramatic flair.

The most notable quality of this design is its focus on bribery and flattery. The game is divided into four “seasons” that function as three rounds of extended play plus a final set of scores during the winter months. The first phase of each season consists of the ‘tea ceremony’. Coins and promises exchange hands as hard alliances are formed between player pairs. These formal bonds will last throughout the lap, providing mechanical benefits for both participants. At the end of the season, the coalition disintegrates and a new discussion phase begins.

The combination of hard alliances with their forced dissolution in the context of a single endgame winner makes a wonderful mix. This social dynamic leads to situations where the players can avoid the clan at the top of the leaderboard, giving the game a built-in catch-up mechanism. The position of the board and the asymmetric special abilities of each faction play a role in alliance decisions, as do emotion and coercion. The wonderful tension that this creates separates Rising Sun of many similar designs in this space.

Much of this politics is driven by the interesting action-selection device at the heart of the game. The mechanism seems to be inspired by games like Puerto Rico and twilight empire, but Lang’s take on it is sharp – and with a crucial twist.

Traditionally, action selection mechanisms allow a player to choose one option each round from a number of actions available to the group. Everyone will then carry out the chosen action, although the initiator often receives an extra benefit or an increased payment. Rising Sun throws a crooked ball; instead of choosing from a public display of actions, the current player draws four options from a pile of political mandate tiles. One is immediately executed, while the remaining three come back on top of the stack. Each player then performs the chosen skill, such as recruiting new troops, moving the board, or acquiring clan upgrades and monsters, with the active player and their ally each receiving an additional advantage.

Each season contains seven such actions. This means that those who are early in the player order will do better that round, as they can select more political mandates in that round than those at the back of the order. This goes away in the long run, but it definitely matters in the short run when discussing possible alliances and potential benefits. It’s just another nuance in a box full of them.

Ripples in the pond

Despite the relative simplicity of individual pieces, Rising Sun is an opaque and complex beast. The advanced moving parts engine may leave you confused, even baffled at the end, but you’ll definitely want to return for more.

The War Phase, consisting of battles that take place in a random selection of regions, is a prime example of grappling with the inherent chaos of design. There is a great incentive to move around the board and win conflicts in areas that you have not conquered before. The victor gets a province token worth a small number of points, but those who can win a series of different regions will get a huge bonus score. From an incentives point of view, this is smooth as it affects shifting governance status and unpredictable dynamics. But it’s also incredibly challenging, as you have to use those actions that are usually chosen by other players and execute near-perfect timing to perform sweeping moves.

Combat Resolution presents a similar test. Contestants simultaneously place coins for different combat strategies on their player boards, which are hidden behind screens. (You can commit seppuku – your units that ritually disembowel themselves to earn honor – you can take hostages, and you can even take advantage of the dead by writing down their stories in the annals of history.) The player who accumulates the most money on any combat action is the only one it is allowed to perform, yet all the money is lost to the supply. This creates a very interesting dynamic of higher stakes bluffing, as you have to balance achieving your goals with saving currency for the next fight.

The winner of a battle must divide his gold among the losers of the conflict. This results in cunning maneuvers such as moving a single warrior in a battle you don’t intend to win, just hoping to bleed the victor’s money. Since battles happen in random order, the ability to scoop up some resources in early battle can be huge as you can use those coins later in the war phase. The smartest players will use this strategy to produce dramatic reversals in crucial confrontations.

Surprisingly, the game seems to scale relatively well. While three players feel too constrained in terms of negotiation and political entanglements, both four and five faction outings prove challenging and quite heated. A critical element of this success is an incentive to stay alone and reject potential allies. “Betray”, one of the strongest mandates in the game, swaps opposing figures for your own, but can only be executed without penalty by those without alliance. These shifting priorities and the nebulous alliances create a thick haze for players to navigate.

This is not seething anger, where you can twist a powerful combination of skills and just hammer at it repeatedly to win. No, Rising Sun is full of cunning social maneuvers and tricky results. It offers a gaming experience that you might think about for days, doubting forced marches and vengeful backstabs. It’s area control at its best – and we loved it.