Review: This War of Mine, the board game |Techilink 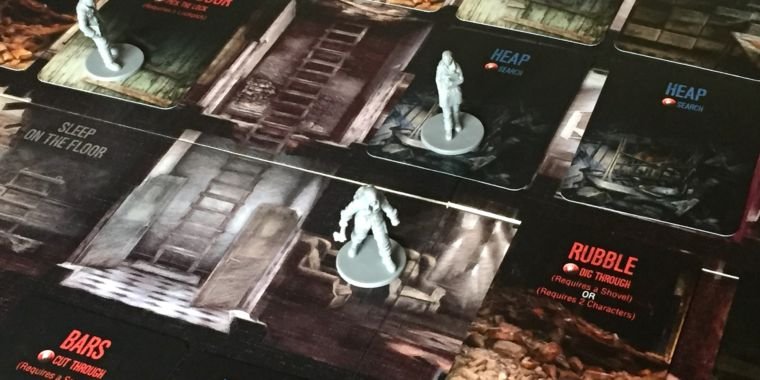 This war of mine is a huge blow to the stomach. Inspired by the war in Sarajevo, the concept here turns the idea of ​​a ‘war game’ on its head, where war is not portrayed as explosions and bullets, but as hunger and pneumonia. The game aims to create a gritty experience, one of discomfort and fear, and the good news (or bad news, depending on your perspective) is that the challenging moral dilemmas are just as compelling in the cardboard version as they are in. the critically acclaimed 2014 video game.

Long is the day

This war of mine is a cooperative experience of shared story. Players coordinate actions between a group of war-weary survivors entrenched in a dilapidated multi-storey ruin. Your people are starving, bruised and emotionally broken, but you still need wood and machinery. During the day phase, you move miniatures around the house and assign them to tasks. You may need to expend a lot of energy digging up the rocks and mortar blocking the passage to the top. You may be rummaging through the broken furniture in what was once a living room.

You can take the leftovers you find and rebuild. You can make a bed to recover from fatigue or build a trap in hopes of catching some food without hope. You can build anything from a herb garden to a plain old chair. But you will never have enough time, energy or supplies to do everything you need. Actions are limited and decrease as health plummets.

As the daylight fades, you have the chance to venture amid the sporadic violence. Without light, the snipers and jackals that patrol the streets disappear. That’s not to say everything is safe; the danger is simply hidden from view, lurking in the darkness.

You have to split your group in two. One section goes to a nearby location map and searches for supplies, while the other stays “home” to hold the door or maybe get some sleep. Anyone not resting builds up fatigue, which is tracked on fun little tokens. These tokens start piling up as you measure hunger, fatigue, illness, wounds and misery. Guarding the door is paramount to keeping everything together as raids take place at night as everyone from vagrants to well-armed bandits try to make their way inside.

Hopefully your cleanup effort was successful and you brought back some potable water, a few bits of raw food – maybe even a broken firearm you can trade with. Collecting these items is accomplished by building a small pack of exploration cards that you burn through to search the location. This gives a clever sense of space as you encounter stairwells or closed doors, which are wasting time.

Each area you explore is different, but for the most part, you’ll scroll through the exploration maps hoping to find precious goods and avoid enemy residents. Fights can break out, leaving you even worse off, but you’re more likely to collect a few useful components to shorten your endless shopping list.

If you’re not completely satisfied, don’t worry; this whole cycle repeats itself tomorrow.

The night is dark

This war of mine is a profound experience. It’s not “fun” in the traditional sense, but it’s captivating and tense. It is a test that aims to teach and instill empathy; the fact that it succeeds is commendable.

An important aspect of its achievement is how it breaks the rules of the game. There is no standard rulebook. Instead, the game offers a humble diary that guides you through each of the stages, dividing bits of instruction into small chunks.

The magazine comes with a book of scripts. This thick, soft cover manual is an index of narrative fragments mixed with mechanical resolutions. You do not work through this tome in an orderly fashion; you pick it up and refer to a specific numbered section when the game dictates.

Such clues come from cards turned over while searching buildings, events triggered at the start of the day, and even visitors arriving at the door. You’re never quite sure when you’re going to get to the script book.

By removing the comfort of an organized rule set, the game leaves you in the dark. It can be maddening for those who want control, but this is intentional. The lack of authority, coupled with reliance on highly random and admittedly random outcomes, is a lesson in letting go. This disturbing goal of reducing player autonomy makes you feel helpless and confused at times – and that’s the point. It is one of the most effective tricks of the game.

The immersion of This war of mine is his main achievement. You soon begin to make choices in the game based on your own moral foundation. You will continue to steal rotten fruit from a broken family, and it will cause your people to die. But the next day you feel better about yourself. Could be.

The game also has a great talent for producing completely personal stories, despite a consistent and sometimes repetitive structure. The magic comes from the book of scripts and the sheer amount of submissions. Your first half dozen plays will likely have little to no repeat results, and every bit of story is juicy. It’s easy to get lost in your own private hell and not realize the hours are ticking by outside.

That immersion sometimes lapses. While the game design has its brilliant strokes, it also has its fair share of banality. A big part of the game is bookkeeping: sliding counters around the board, shuffling decks, and collecting tokens. Sometimes it feels like downright busy work.

This is emphasized from the start, with setup taking quite some time. You have to supply your two-dimensional house with a number of cards, and the many decks that lie on the outside edge of the board also need to be prepared in a specific way.

The complexity is further complicated by the fact that the game can last five (!) or more hours if you are extremely lucky and survive to the end. It does offer a built-in way to save your progress via note-taking, but the whole ordeal can be tough and finicky in the long run. You have to be really committed to make the whole thing work. If you delve into the immersion and theme, these issues are overshadowed by the ingenious moments and impossible choices.

This is a heavy and stupid game that you’ll love to throw in the water while only having to catch your breath every now and then. You never quite win This war of mine. If you somehow get by and make it to the end, you’ll just survive. It’s a depressing vision of existence, but one that deserves to be experienced.