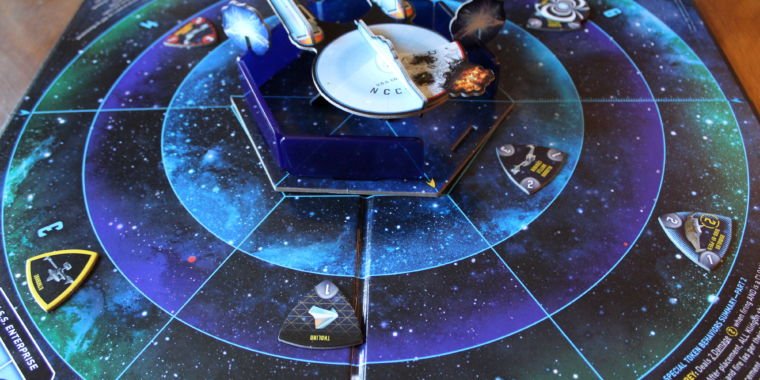 Welcome to Ars Cardboard, our weekend overview of table games! Check out our full board game coverage at Cardboard.arstechnica.com.

Star Trek fans: did you like the original series best when Kirk was wrestling with the Gorn on a distant planet or threatening to punch the female leader of an alien civilization(!)? Or the space standoffs where Enterprise was attacked by Tholian, Romulan and Klingon ships, where shields were raised and phasers fired and Scotty started screaming that the ship couldn’t take much more, Captain?

If the latter, consider the new Star Trek panic board game, where you will fight a lot.

Board the cardboard Company

The original Castle Panic board game gave players a castle to defend, complete with cardboard walls and towers, in the middle of a circular forest clearing. Enemies swarmed in from the forest edge of the circle’s six colored sectors, closing ring by ring, as players attacked them collectively by playing knight and archer cards that matched the correct sector and ring for each enemy. After a player’s turn, enemies moved in one ring and more enemy tiles were added to the outer ring. If enemies reached the castle, they would start destroying walls and then towers; if your group lost all its towers, the game was over. Victory came by surviving a full pocket of enemy tile draws.

I’ve played the game countless times with my kids, and while it can be entertaining, there’s little real strategy, no real objective beyond “survival,” and a 90-minute runtime – at least 30 minutes too long for this kind of experience.

So when I heard that Fireside Games, the family company is behind it Castle Panichad partnered with USAopoly to create a Star Trek version, I wasn’t sure what to make of it. After all, USAopoly was best known for putting new IPs on existing games, giving us games like CLUE: Game of Thrones, CLUE: Alien vs. CLUE: Disney Tower of Terror, CLUE: Doctor Who, CLUE: Firefly Collector’s Edition, CLUE: Harry Potter, CLUE: Penny Dreadful Edition, CLUE: Supernatural Collector’s Edition, CLUE: The Big Bang Theory, and CLUE: The Nightmare Before Christmas by Tim Burton. (Not to mention Yahtzee versions featuring Cthulhu, Deadpool, and the Legend of Zelda.)

Would Star Trek panic be a simple reskin cash-in?

Quite surprising – it isn’t. Indeed, this is the best version of it Castle Panic yet improving the basic experience through new mechanics, much better art and variable player powers. And did I mention the thick cardboard, huge mission cards, and seriously hefty shield pieces?

The care taken here is evident the moment you open the box as you are faced with a 7 inch long cardboard Company that needs assembly. This thing is fantastic, well built and huge, and it dominates the game board. Like the castle in the original game, the Company fights swarms of enemies; however, unlike the castle, the starship can rotate and even “move forward”, pulling any ship in front of it one ring closer to the center. Because of this, the game’s deck has effects tied to the ship’s “face” rather than any absolute board positions, adding an extra wrinkle to the gameplay.

Enemies go in as usual, but here they also cloak, unmask and move sideways if necessary; the Tholians even trap the ship in a web if they get too close, preventing further movement. Enemies also shoot on every turn, not just when they get close. This amounts to much more damage to the Companybut it’s offset by a healthy set of neutral or helpful tiles among the “enemies” and by plenty of cards that let you add even more cards to your hand, dig through the deck, or move enemies with tractor beams.

The more fundamental changes concern the winning conditions. You are no longer faceless, nameless heroes in a castle; now each player is one of the original series crew, complete with a special power that activates on every turn. For example, Chekov deals one extra damage per turn when attacking an enemy ship with a phaser, while Scotty can repair a damaged shield or hull segment.

The characters aren’t just trying to survive an extensive space warping, either; in Star Trek panic, they try to solve missions based on the show. In “The Immunity Syndrome” they have to fight a giant space amoeba – as one does from time to time – and the game includes a special “Space Amoeba” token. To beat it, players must Company to face the amoeba and advance enough times that the amoeba is in “close range” (i.e. next to the ship). In addition, they must “dedicate” two phaser cards and one dilithium card to the mission to launch “an antimatter payload into the chromosome-like body of the Amoeba”. Oh, and they have to do all of this within five turns or the mission will fail. Successful missions bring rewards, often in the form of patching up the Company.

Within the confines of the base Panic system, the missions try to convey a sense of theme, although many of them boil down to simply laying certain cards from your hand in the direction of the mission. Still, having goals is far preferable to simply surviving, as they put your own destiny (somewhat) under control. (Because these missions do rely on drawing cards, sometimes you end up with missions that are simply impossible to complete in the allotted time. Yes, it’s frustrating.)

Missions also suffer from game length issues. If, like me, you prefer shorter games of this type, simply set the victory condition lower. (We find that three successful missions work well for an evening family game.) However, if you’re a masochist with time off, the game includes counters for anything up to ten-mission games.

Star Trek panic is not a deep strategy game. Don’t pick this up and expect to set your brain on fire. Don’t think you’ll master the ship’s systems in depth; this is basically an “explosion and repair” game. And don’t expect to “really feel” involved in the missions. Still, the theme comes through. (I’ve never actually been able to destroy an enemy ship without making “pew! pew! ba-boooom!” sounds.)

The game is mostly about creating and resolving pressure, and it excels at delivering the “panic” the name promises. If you’re halfway through a game trying to complete “Journey to Babel” with three turns to go, while a pair of Romulan ships unmask and fire at the hull of your now-shieldless Company and Kang’s Battle Cruiser suddenly comes into play, you feel under impossible odds.

But as you send four security teams to fend off the Romulan boarding parties, play the “The Corbomite Maneuver” card to clear Kang’s ship, and stumble your way back to a starbase with four of your six hull sections on fire, feel you feel a bit like Kirk, Spock and the gang making another one of their improbable escapes.