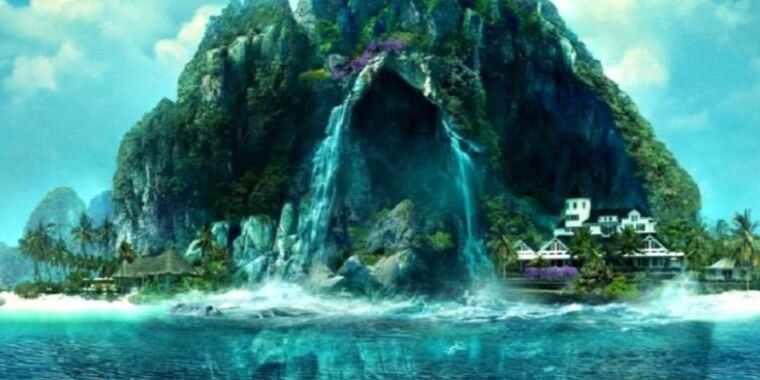 Five guests in a remote resort town find their fantasies turned into nightmares in Sony Pictures’ big-screen reboot Fantasy Islandbased on the hit TV series of the same name that ran from 1977 to 1984. This 21st century update replays the horror aspects and has been touted as a cross between west world and The cabin in the woods-maybe with a little Lost thrown in for good measure. Unfortunately, the film fails to capture the elements that made these works uniquely appealing, and the result is a muddled medley of tired tropes and gaping plot twists that you can see coming from miles away.

(Mild spoilers below the gallery.)

Fantasy Island was always a great concept for storytelling despite the cheesier elements. Apparently creator Aaron Spelling presented the series as a joke to ABC executives after they rejected all of his other ideas — and the network loved it. The ultra-urban Ricardo Montalbán played the dashing lord Roarke, owner of the titular island, giving guests the chance to indulge their fantasies at an appropriate price. He was helped by his faithful sidekick Tattoo (Hervé Villechaize). Each episode started with Tattoo yelling the tagline, “She plane! Ze plane!” and the ringing of a bell in the island’s main tower as the guests arrived.

The series focused on the various fantasies of specific guests, who inevitably found that things didn’t quite go the way they had envisioned. While the ‘rules of engagement’ stated that guests should see their fantasies to the end no matter what, Mr. Roarke always stepped in when things got too dangerous. The series had certain supernatural elements (time travel was common, and ghosts, ghouls, and the devil himself appeared), especially in later seasons, with hints that Mr. Roarke may have been immortal.

An attempted revival of the series in 1998 leaned even harder into the supernatural aspects, presenting Fantasy Island as a sort of limbo and a source for Mr. Roarke, while the many assistants who worked there paid off an undisclosed debt. That reboot bombed and thankfully was canceled mid-season.

This latest reboot retains much of the original premise. According to the official synopsis: “The enigmatic Mr. Roarke (Michael Peña), makes the secret dreams of his lucky guests come true in a luxurious yet secluded tropical resort. But when the fantasies turn into nightmares, the guests must solve the mystery of the island. to escape with their lives.”

Be careful what you wish for

Gwen (Maggie Q, Divergent, Nikita) is a regretful successful businesswoman who wants to change the past, most notably her refusal of a marriage proposal years earlier. Melanie (Lucy Hale, Liars) wants revenge on the mean girl who bullied her in high school, Sloane (Portia Doubleday, mr. Robot† Patrick (Austin Stowell, Bridge of Spies) is a former police officer who wants to serve in the military like his late father. And stepbrothers JD (Ryan Hansen, Veronica Mars) and Brax (Jimmy O. Yang, silicone valley) – well, it’s some perennial college students who have the fantasy of “having it all.” This translates into a wild poolside rave with lots of beautiful people in a mansion that also features a stash of weapons and a panic room.

That’s a lot of storylines to juggle over the course of a 109-minute movie, meaning we can never spend much time with a character. There’s a reason the TV show only featured two or three fantasies per episode. The guests are thus little more than lightly sketched caricatures, rather than well-developed characters. It’s hard to get too emotionally involved in their fate. The one exception is Gwen, who is haunted by a tragic mistake in her past and tries to put it right – stumbling upon the truth about why they are all there in the process. kudos to Maggie Q for imbuing a criminally endorsed role with such intelligence and deliberate remorse.

The original TV series was content to question the true nature of Mr. Roarke and Fantasy Island leave a mystery. That was a wise decision. The film attempts to provide a rudimentary explanation for both, which, frankly, are ultimately unsatisfactory. There’s so much that is never explained, such as why Fantasy Island’s “employees” appear to be zombies with black gunk seeping from their eyes when “killed” (not that they stay dead). The final third of the film is a frantic mess, with predictable twists and turns poured into an already confusing script, with little apparent thought as to whether those turns make sense for the characters.

Too bad, because the raw material and the starting point are promising. Perhaps it would have worked better as a miniseries on a streaming service, allowing the characters and themes to be fully fleshed out into a more satisfying whole. But maybe not. Above all, Fantasy Island is boring – arguably the worst sin a movie can commit.