Review: Civilization VI is a wonderful leap through history |Techilink 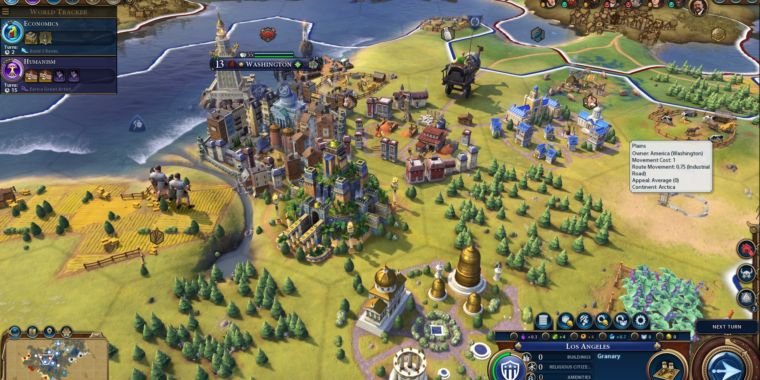 This time it’s not alone Civilization’s version of history that is virtually flawless and free of annoying complications. Sid Meier’s Civilization VI is an almost flawless game – freer from menu diving, micro-management, and spreadsheet reading than just about any turn-based 4X strategy game I’ve played to date.

If you’ve ever wanted to explore, expand, exploit, and eradicate ahistorical societies, but have always been too afraid of numbers to give, civil chance, there’s never been a better time to dive in. Newcomers will also be saved the trouble of taking all the franchise lessons that Civ 6 throws out the window of the series. Civ 6 is both the easiest on the eyes Civilization to date and the biggest departure from the series from tradition (among the main “numbered” games, that is).

But civil‘s newfound cleanliness comes at a price that is not immediately apparent. While most new mechanics are easy to spot, they are established civil conventions are not well explained this time. This is partly due to a greatly reduced ‘Advisor’ system. In the previous civil games AI advisors for military, economy and culture appeared to give you detailed advice on the next step and why.

The concept is still there Civ 6, but the uniquely themed talking heads have been replaced with just one. As before, her icon appears next to suggested projects. Yet she does not give any details about Why she suggests that you build a granary, settler, warrior or whatever. You are forced to make an educated guess.

The only excuse for less specific instruction – besides Firaxis possibly wanting to let go of players’ hands – could be to include “Eureka” and “Inspiration” targets. These are not very well explained themselves, but once you to do notice them and understand how they work, they provide a good foundation for what you should be doing at a particular level of development.

For example, if you want to research archery, killing an enemy with a less advanced “Slinger” unit puts you on the research path to a base army and leads you to a combat-oriented play style. It also activates the “Eureka” moment for archery, cutting the research time in half. Similar objectives exist for every piece of technology in the game, as well as all cultural developments (for that, the sub-objectives are branded ‘Inspiration’ instead).

These act as a substitute for advisors to introduce new players into the basic stream of Civilization, and they also suggest logical paths forward. Yet Eurekas and Inspirations are static; the objectives for each development remain the same between games, Civ 6 gives no indication of which specific Eureka or Inspiration might be wise to pursue next. That does little for experienced players who like to lean Civ 5holding the little hand when they otherwise didn’t know what to do.

But together, I think the research objectives and low-impact advice merge to create a smoother, less paint-by-number method to push players in the right direction. They do take some getting used to.

While writing a brand new way to teach players, Firaxis may have skimped on some of the in-game lessons. Returning players should know – or at least be able to guess – a lot of small details that have not been covered at the highest level for newcomers.

For example, if you “destroy” your own units, you will earn back some of that currency. Why Civ 6 don’t call this process ‘sell’ instead of ‘destroy’ escapes me, and I played Civilization before. I can only imagine that someone unfamiliar with the game will find themselves on units that are well past their prime and miss out on a useful influx of gold in hard times.

Then there are “facilities”, which… well, ask me about amenities, and I’ll tell you I… still don’t know how amenities affect the growth and happiness of my cities (and the game won’t tell me).

Those are just two of many similar, nagging mistakes with the way Civ 6 declares itself. It’s as if, in the quest for the most attractive, minimalistic Civilization yet the developers were overzealous in scraping “unnecessary” information that turned out to be necessary.

All that clipping does manage to create an attractive package. The newer, cleaner look to civilization VI the game does nothing but favors, aesthetically. The game’s “war fog” manifests itself as an old-fashioned map on yellowed parchment of the “here are dragons” variety. The map starts blank, of course, but as you discover new details, they are drawn in 3D. When they leave your line of sight, the details remain, but now they’re inked in thin, delicate quill pen that leans toward dissolving historical aesthetics.

Civ 6‘s soundtrack is also seamless. Each track folds over the next as you progress through the ages, and each track represents different styles, eras and cultures. The numbers are like pages in a book – one part of the whole after another and another. Not Since Monkey Island 2: LeChuck’s Revenge has video game music scaled such an interactive peak!

Couldn’t find it with a map…

Then there’s the enemy AI, which is: not awesome. This time, developer Firaxis chose to give each civ leader an agenda that capitalizes on their unique strengths. Queen Victoria is all about that base building. Her Majesty is determined to colonize new continents, even if those continents are already full of opposing cities and her time would be better spent elsewhere.

That gives you, the player, a huge advantage, as you can quickly adapt to changing politics, resources and information, making sure you know the central motivation of the opposition. civilization VIThe way to balance this advantage is to paint a huge target on your back. Failure to meet a faction’s specific wishes or the slightest breach of their agenda is an immediate trigger for war (at least for any difficulty level above the midpoint).

However, the AI’s aggressive stance is not a major hindrance. That’s because, in my experience, enemy civilizations don’t know how war works in their own game. They send cavalry, cannon and carpet bombers into my territory to linger until they take enough damage to convince HQ it’s not worth it. Then the offending official offers me gold to accept a peace treaty. Hurrah! I win!