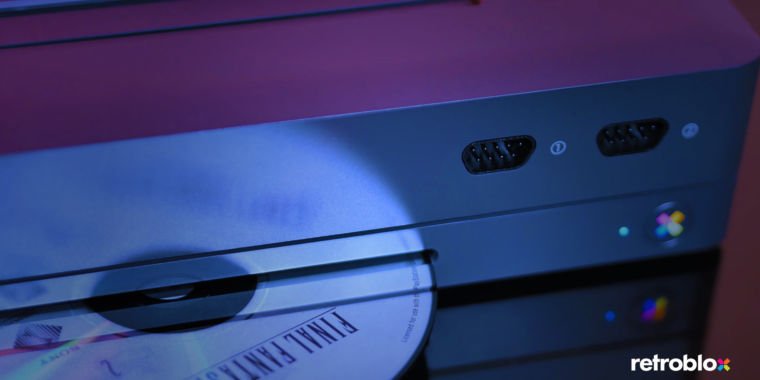 Retroblox Inc. from Los Angeles has a new take on the emulation-based retro game console: interchangeable hardware modules and a built-in optical disc drive. The new device, called the Retroblox, builds on the Hyperkin Retron 5 and Retro Freak by allowing users not only to play original cartridges for the Nintendo NES, SNES and Sega Mega Drive (Genesis), for example, but also to play CD-based games from consoles such as the Mega-CD, PC Engine CD and Sony PlayStation.

However, unlike the Retron 5, the Retroblox does not accept all cartridges out of the box. The base unit comes with a “Hitachi LG Data Services” DVD drive for playing CD-based games, but cartridge-based games require additional purchase of “Element Modules”. These modules add a cartridge slot, as well as a pair of controller ports that are compatible with original controllers for the system being emulated.

Having to swap out a module to play on another system is definitely less convenient than the Retron 5’s all-in-one approach, not to mention potentially more expensive depending on how much Retroblox charges for the extra modules. However, the Retroblox is capable of adding games to a “digital collection” by copying ROMs directly from cartridges and CDs to an SD card inserted into the system. Users can then play that game in the future without having to reseat the module.

The inclusion of an SD card slot and two USB ports indicates that the Retroblox can play ROMs downloaded directly from the internet, but the company will remain silent on additional details until a later date.

Retroblox promises that players will be able to stream their gameplay directly from the console to Twitch and YouTube, and they will have the ability to upscale games to 1080p resolution with support for “virtual displays” that will replicate the look and feel of a CRT television.

Retroblox also says that games that use expansion chips on the cartridge, such as the Super FX chip used by numerous SNES games, will be compatible with the system. Going so far as to say that the Retroblox will provide “full hardware compatibility with every game in their classic games library,” a feat no emulation-based console has been able to deliver to date.

Of course, there are a few things to be skeptical about with the Retroblox. For example, all teaser images appear to be renders. Oh, and it’s launching through a crowdfunding campaign in April 2017 (and then we’ll get prices, specs, and a full list of compatible systems too).

For some peace of mind, at least two industry veterans run Retroblox: Bryan Bernal and Eric Christensen. Bernal has a career in games dating back to the release of Ratchet & Clank and Resistance Fall of Man on PlayStation 3, while Christensen has worked at Insomniac Games, Zynga and Bluepoint Games as a programmer and engineer.

The Retroblox joins an increasingly crowded retro console market. Released last year were the Analogue Nt — a console that took the guts of an original NES and repackaged it in a solid aluminum sheet — and the RetroUSB AVS, which used a field-programmable gate array (FPGA) to replicate NES hardware. simulate at a very low level. The latter approach results in a much higher level of hardware compatibility and performance compared to the emulation used even by Nintendo’s own NES Mini, although original hardware remains the optimal way to play old games.

In that regard, Ars is working on a comprehensive guide on how to get the most out of old consoles on modern TVs. Keep an eye out for it in the coming weeks.