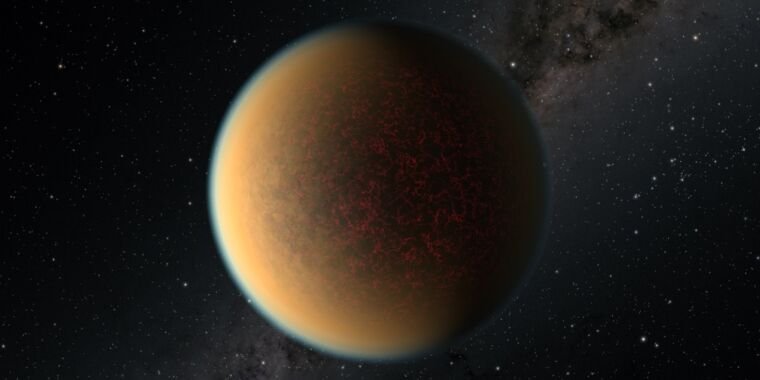 The atmosphere with which most planets begin is often not the same as the one with which they end. Most of the gas present in the formation of a solar system will be hydrogen and helium. But a look through the rocky planets of our solar system reveals three very different atmospheres (and one very faint one), with hydrogen and helium as relatively minor components. And as we gain the ability to look at the atmospheres of exoplanets, we should gain a better perspective on all the ways that atmospheres may change as their planets age.

This week, an international team of astronomers reported finding an atmosphere on a planet you wouldn’t expect to exist. And the astronomers suggest it’s actually the planet’s second atmosphere, generated by volcanic activity after the first boiled down early in the planet’s history.

In general, we don’t currently have the technology to image exoplanets unless they are very large, very young, and a considerable distance from the star they orbit. Even so, we can still get a sense of what’s in their atmosphere. To do that, we need to observe a planet moving across the line of sight between Earth and its star. During a transit, a small percentage of the star’s light will travel through the planet’s atmosphere on its way to Earth, interacting with the molecules present there.

Those molecules leave a signature on the spectrum of light reaching Earth. It’s an extremely faint signature, since most of the star’s light doesn’t even see the atmosphere. But by combining the data from several days of observation, it is possible to make this signature stand out among the noise.

That’s what scientists have done with GJ 1132 b, an exoplanet orbiting a small star about 40 light-years from Earth. The planet is about the size of Earth and about 1.5 times its mass. It also orbits extremely close to its parent star, completing a full orbit in just 1.6 days. That’s close enough for GJ 1132 b to be extremely hot, despite the small, faint star.

(There are some uncertainties in these numbers, based on how often its star emits high-energy particles and how strong the planet’s magnetic field is. But they aren’t big enough to hold an atmosphere in place for the entire 5 billion. – years of history.)

So researchers were probably surprised to find that, based on data from the Hubble, the planet appears to have an atmosphere.

How did that get here?

One possible explanation for this is that the planet formed at a cooler distance from the star and then migrated inward. But that would mean we’ve caught GJ 1132 b in a relatively narrow time window: between when it got close enough to the star to lose its atmosphere, but before all that atmosphere had warmed up into space. The planet is more likely to have formed near where it is and generated a second atmosphere after the first was lost.

Fortunately, the data provided by the Hubble could provide a hint of what’s in the atmosphere. The signature the molecules in the atmosphere leave on the starlight gives an indication of what they could be. These indications are complicated – there are many molecules with signatures that partially overlap in some parts of the spectrum, but not in others. But it is possible to look at the signal from the planet’s atmosphere and identify combinations of molecules that are compatible with that signal.

The researchers find that there are likely some aerosols in the atmosphere. And its composition really wouldn’t be surprising on another planet: mainly methane, ethane, hydrogen and hydrogen cyanide. But remember, the whole reason this atmosphere is interesting is because the planet should have lost its atmosphere early in its history — and all the hydrogen should have gone with it.

However, the research team suggests a possible solution to this conundrum. Early in the planet’s history, it should have had both a hydrogen-rich atmosphere and a surface that was a magma ocean. Recent studies have suggested that a large amount of hydrogen could potentially be stored in magma and, as the planet cools, become trapped under the crust.

But may not be trapped forever. The astronomers suggest the planet should be hot, partly because of the large amounts of radiation it picks up from the extremely nearby star, but also because of the tidal forces exerted by the star’s gravity on its crust. This should be enough to keep the crust thin and flexible, allowing for large-scale volcanism. So, they suggest, the current atmosphere may be formed and replenished by volcanic activity, with hydrogen-rich magma creating its distinct composition.

Obviously, this won’t be the easiest to confirm, although the arrival of the James Webb Space Telescope will open up new regions of the spectrum to give independent checks on the estimated composition of the atmosphere. But the best check is to discover that this kind of secondary atmosphere appears on other exoplanets. And given the interest in mapping their atmospheres, we don’t have to wait long for that.

The arXiv. Summary Number: 2103.05657 (About the arXiv). To be published in The Astronomical Journal.