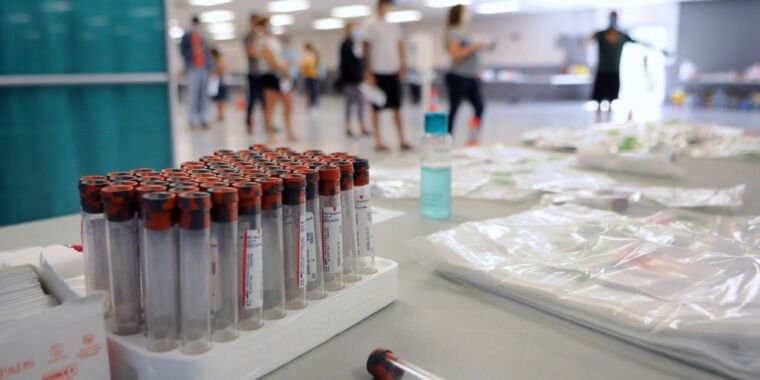 While many societies remain locked in various forms of isolation and social distancing, there is a growing population for whom these measures may not be relevant: those who have had a SARS-CoV-2 infection and have cleared it. While we have not yet established the susceptibility of these people to repeated infections, many clearly have antibodies to the virus, and we find that some antibodies appear to neutralize the virus. So there is a reasonable chance that it is safe for these individuals to circulate more widely within the population.

A group of researchers, based largely at Georgia Tech, has looked at whether this population could be helpful in limiting further infections. The researchers used an epidemiological model to test what would happen if we placed the previously infected individuals in key jobs that we considered essential to the functioning of society during social isolation. The results suggest that this “shield immunity” on its own is somewhat effective and significantly magnifies the impact of social isolation.

Right now there are some things we don’t know about the progression of a viral infection that are essential for this to work. One is how long it takes the person to stop being infectious and how that compares to our ability to detect viral RNA in samples from these individuals.

The second is the level of immunity an infection generates. For other coronaviruses, this ranges from less than a year for those that cause cold symptoms to much longer immunity for those who have survived a SARS-CoV-1 infection. While a number of antibody tests have been generated that can determine whether an immune response has been activated against SARS-CoV-2, the accuracy of some of these tests is not great, and we do not know how well antibody detection correlates with actual immunity. .

While these issues should resolve themselves with further research, there are other potential hurdles to the concept. First, the people who are infected may not be the same people who hold jobs that we consider essential. We can’t just throw any random person into a supermarket or medical device factory and expect them to understand how to run the business. The same goes for things like the medical field, where many jobs require very specific training.

All this means that we have a lot of work to do to make these kinds of programs effective. But given that the pandemic seems to be spreading widely in the United States, we clearly have time to fix these problems.

Back to the models

What does the new research actually indicate? The authors assumed the availability of an accurate post-infection test that could identify those infected based on the existence of antibodies to SARS-CoV-2. They also assumed that individuals identified by these tests could safely communicate with both infected and uninfected individuals without transmitting the virus from one group to another. With those assumptions in place, they turned to an epidemiological model.

The type of model they worked with is called a SIR, which stands for Susceptible, Infected, and Recovered. Essentially, it divides the population into these three groups and models the speed at which people move between these groups. So when the number of people infected is small, the rate at which people go from susceptible to infected is low, but it grows as the infected pool gets bigger. And over time, more and more people move to the restored pool, from which they can no longer return.

In this case, the team adapted a typical SIR model to include infected pools with and without symptoms, as well as the isolation of those with symptoms. The researchers were also able to toggle social isolation on and off, which affected the rate at which people moved from the susceptible to the infected pool. With all that in place, they started model runs with a single infected individual in a population of 10 million and let the infection run its course.

In the main experimental part of their model, they changed the behavior of the model once the recovered group made up 0.1 percent of the total population. At that point, some of the recovered population begins to be used to replace people who play a critical role in their interaction with the infected and susceptible populations. Here, the authors suggest, their immunity may act as a shield. They call the process of getting them into these positions “interaction substitution” and the concept “shield immunity.”

As we noted earlier, not everyone can just step into any of the jobs we deem essential, so the authors explain this with what they call an “interaction bias.” That’s just a factor they can vary to increase or decrease the likelihood that a susceptible individual will interact with an immune type rather than a potentially infected one.

In general, their method works. In a model assuming a relatively low baseline level of infection and a moderate degree of interaction substitution, the total number of deaths was 50,000 out of the 10 million starting population. Without interaction substitution, that number was over 71,000. If we get better at finding ways to ensure interactive replacement, the death toll could drop to just 20,000.

The authors found that, when combined with social distancing, the effects were even greater. The impact of shield immunity grew as social distancing became less effective, a scenario that appears to be becoming more and more relevant in many parts of the US. Finally, the researchers conducted a model in which people with immunity were preferentially shifted to positions where they interacted with the elderly. This resulted in a greater reduction in mortality from the infection.

The only challenge the models revealed was that since both social distancing and shield immunity were effective, the population of recovered individuals grew much more slowly, limiting the overall effectiveness of the interactive replacement.

It would be nice to see this idea tested in models that are structured differently than the SIR model used here. But it’s hard to imagine a scenario where, given the authors’ assumptions about immunity, this kind of interaction substitution would not be effective. However, the potential biological problems aside, the approach would require a level of social engineering that many societies might not be comfortable with.