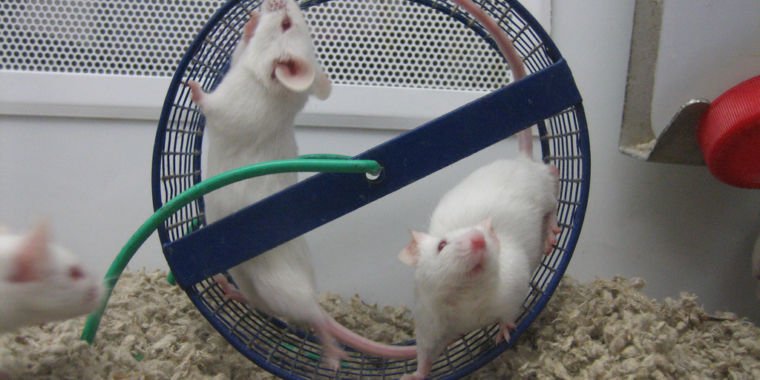 Gene drive is both a promising and disturbing technology. It allows us to construct a piece of DNA that, once inserted into a specific location in an organism’s genome, will convert other versions of the gene so that they also carry the insert. Once started in a population, gene drive will convert the entire population within a relatively short number of generations.

That’s promising, because it opens the door to mosquito farming to spread sterility through a population, eliminating the spread of disease and quite a bit of itching. But it’s also a genie that, once out of the bottle, seems impossible to put back – and therefore disturbing. But so far, there’s a little consolation: It’s only been shown to work on insects.

Now a large research team from the University of California, San Diego, has managed to get it to work in mice. Kind of. It turns out that the efficiency is much lower. While the gene drive DNA is inherited at rates well above normal Mendelian-style inheritance, it’s not nearly as effective as in insects, and it’s not clear if we know how to fix it.

What is Gene Drive?

Gene drive depends on the ability to create a break in the DNA at a specific location in the genome. While we now have several tools that can potentially do this, most have used the CRISPR/Cas-9 system, which is also used for gene editing. This system uses a combination of an RNA that corresponds to a specific location in the genome (it can base pair with one strand of the DNA double helix) and a protein that cuts the DNA at that location.

What happens next depends on the cell. Cells have two ways of repairing DNA damage. One involves taking the two ends on either side of the break and gluing them back together. Usually, however, some of the DNA at the ends is lost when they are put back together, creating a deletion at the site of the cut. The second involves identifying a similar DNA sequence and using that as a template for repair. This usually involves the other copy of the chromosome found in the cell, but it is possible to inject similar DNA sequences that are used for repair instead.

This last technique is how a gene drive construct is introduced into the genome in the first place. The researchers choose a target gene and then design an RNA that can cut the DNA. Then they inject an RNA that targets it, along with the protein, to make the cut. In addition, they inject many copies of some DNA that matches the gene they target, but also contains an insert of extra DNA. You can think of that DNA as the payload of the gene drive.

Usually the payload encodes the two things just injected. In other words, it will code for an RNA that targets the same gene and a protein that will cut the gene. This will not cut the engineered version of the gene, because the payload disrupts the sequence to which the RNA corresponds. But it will cut the normal copy of the gene on the other chromosome. To repair that cut, the cell uses the copy that contains the charge. As a result, both copies of the chromosome will eventually carry the payload and any offspring will inherit it. Those offspring will then see the process repeat, with both chromosomes being converted, causing the charge to quickly spread throughout the population.

This is how it works with insects, including fruit flies and mosquitoes. But would something similar work in mice? The authors argue that getting it to work could be helpful, as it would allow researchers to create combinations of mutations that would otherwise be difficult to work with.

For their gene drive test, they chose to target a gene needed to give a mouse’s fur its color so it’s easy to see if it’s working. They also marked their gene drive payload, which they call CopyCat, with a gene encoding a fluorescent protein. The batch also contained a guide RNA. But as a safety feature, it didn’t contain a DNA-cutting enzyme, so it had to be grown separately. This prevents it from working as a true self-reproducing gene drive system, while still allowing us to test whether such a system would work if it was packaged properly.

That also proved helpful because the activity of the DNA-cutting enzyme turned out to be key to making an effective gene drive system. The researchers first set it up in such a way that the gene would be active in all cells, but that turned out not to work. Rather than lead to the gene drive payload being copied over to another chromosome, the fur color gene was eventually deleted. Apparently, early in development, some cells had the wrong kind of repair — the one that simply ties up loose ends.

So the researchers switched different pieces of DNA that made the DNA-cutting enzyme active in different cells. When it was active in the male sex cells, it also caused large deletions instead of converting the normal copy of the gene. The researchers eventually found success with a setup where the enzyme was active in female germ cells before the DNA was repaired using a copy with the gene drive payload.

Even then the efficiency was not great. In insects, you would usually see that almost every animal in the next generation ended up with two identical chromosomes carrying the gene drive construct. But in mice, the frequency was much lower, about 72 percent. That is a much higher percentage than would be possible by normal inheritance; the authors refer to the results as ‘super-Mendelian’. But it’s not efficient enough to drive the gene drive payload through a population at a tremendously accelerated rate, although it could get there eventually.

The fear that this process could take over mammalian populations seems to be waiting for improved technology. As the authors put it, “It seems that both the optimism and the worry are probably premature.”

What are the advantages? At this point, the goal stated by the authors to use the system to synthesize interesting combinations of mutations seems within reach. But some suggestions have been made for using it in populations of wild mice to eliminate their ability to carry certain diseases or as part of an eradication effort where rodents have been an invasive species, such as on remote islands. Both applications will also have to wait for a much more efficient version of the technology.

But it wouldn’t be possible to improve the technology if we couldn’t make it work in the first place. Provided progress is made in the future, this document is an important first step.