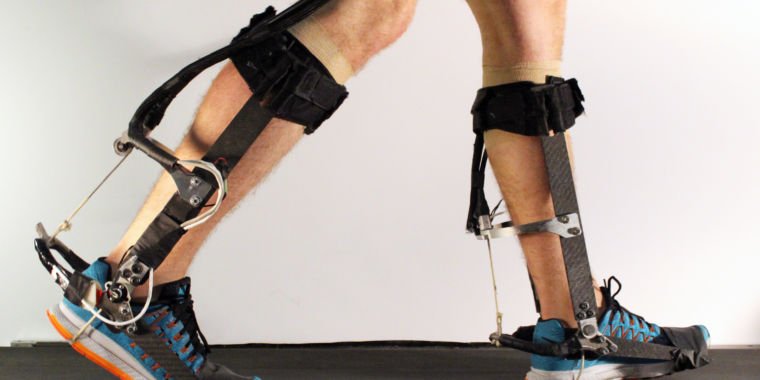 Exoskeletons are a common feature in the natural world. But in recent years, scientists have started experimenting with adding it to humans. Powered exoskeletons have the prospect of helping people with mobility problems resume normal lives. And there’s always the prospect of giving ourselves superhuman strength, like Ripley in Aliens. Even without power, an exoskeleton can more efficiently redistribute the energy of our normal movements.

But no two people are quite the same – they differ not only in physical proportions, but also in strides or running styles. So how do you tailor your exoskeleton to a user’s quirks?

The answer, according to a team at Carnegie Mellon University, is the combination of a genetic algorithm and a treadmill. After a few rounds of optimization, most users got most users running in an energy-efficient way. And by changing circumstances, he learned how to help people walk uphill or carry heavier loads as well.

It’s all in the ankle

As you can see above, the exoskeleton tested covers only the foot and lower leg. It uses a little force to take some of the effort out of walking by adding torque to the ankle during a stride. While there isn’t much going on mechanically, the exoskeleton has four parameters that are easily adjustable: the timing when it changes direction, the amount of torque applied at its peak, and when in the stride that peak is reached. While it is possible to have a feel for how to set these up, there is no guarantee that our intuition will be correct or that the same parameters will work for everyone.

So the team turned to what they call “human in the loop optimization.” This involves placing a human wearing an exoskeleton on a treadmill and tracking their metabolic activity to get a sense of how much effort they put into walking.

For an hour on the treadmill, an algorithm runs the exoskeleton, testing different combinations of the four parameters and tracking the resulting metabolic effort. After a round of testing, a genetic algorithm chose the top performers and used aspects of each to create a new generation for testing. In most cases, the hour was enough to go through four generations of control software. Going generations further led to minimal improvements.

In the 11 individuals this was tested on, the energy used to walk fell by 14 percent to nearly 40 percent, even though they only wore one. The low figure (14 percent) is about the best previously achieved with non-optimized control software, and that was when the subject was wearing an exoskeleton on each leg. On the high side, it beat the best performance of hardware covering the entirety of both legs from the hips.

Looking at the final control software, there were some things that worked for everyone tested. For example, peak torque was always best midway through the pass. But the timing of when torque was first applied was eventually set over a range of about 20 percent of the stride. Intriguingly, in many cases the optimized operating software is used less energy than a non-optimized version. So an effective exoskeleton does not necessarily mean that much more energy is pumped into one’s legs.

Because the genetic algorithm produced such effective gait control software, the team turned it loose on a number of other tasks. The researchers were able to create separate control software to walk faster, run faster, walk uphill and carry a heavy load. All this saved energy compared to the same activity with normal shoes (reductions ranged from 30 percent for walking fast to just four percent for carrying something heavy). It also worked with the hardware on both legs.

The researchers also discovered that they could optimize for things other than energy consumption. In a separate test, they minimized calf muscle activity while walking by more than 35 percent.

That may seem like an odd goal, but it’s worth taking a step back and remembering why we make exoskeletons in the first place. The aim is primarily to help people who have limited mobility due to injury or illness. The exoskeletons have the potential to both make them more mobile and actively assist in their physical therapy. It’s not hard to imagine a situation where minimizing calf muscle activity could be a significant aid to someone’s physical therapy.

More generally, injuries and illness add another layer of complexity to the normal gait variations. This new approach can not only help accommodate that complexity, but can manage that complexity under conditions ranging from slow walking to running.