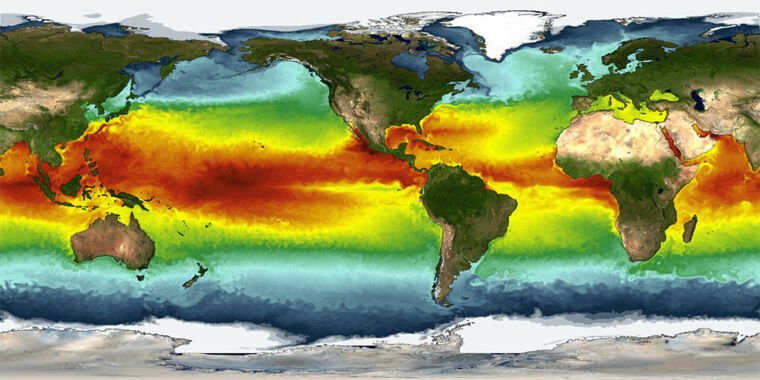 One day, people will get it done and drastically reduce greenhouse gas emissions. But – not to check your daydreams too strictly here – how exactly will global temperatures react on that day? This is a question that climate science has long been working on, although fiends in the details have led to some confusion.

A new study led by Chen Zhou of Nanjing University tracks down and exposes another devil. Research has increasingly shown that not only the average surface temperature of the planet is important for monitoring warming, but also the spatial pattern of those temperatures. That may be important for calculating things like climate sensitivity to greenhouse gases, but it’s not taken into account in some methods of estimating how emission reductions affect warming.

This “pattern effect” of warming in different parts of the world affects the way the planet returns heat to space. For example, if warming is slightly stronger in the western equatorial Pacific — which it has been — that region is better at producing sunlight-reflecting clouds and releasing heat upwards. If you assume that warming happens evenly around the world, you miss that somewhat compensatory behavior.

What does that mean for a low-emission future? One way to calculate this is by using the observed man-made amplification of global warming and temperature changes in the past. Based on this calculation of the Earth’s climate sensitivity, you might wonder how much warming should occur if the greenhouse gases stop increasing. Since the climate (mainly the oceans) cannot immediately balance with a stronger greenhouse effect, it will take some time for the temperature to fully catch up.

But where will it be once it’s caught up? If the pattern effect has dampened Earth’s past response, there may be more warming in the pipeline — and a warmer end result.

Calculations of warming we’ve already committed to also rely heavily on assumptions about what our future emissions will look like — a major source of confusion. The scenario used in this paper is one in which we reduce emissions enough to simply maintain current greenhouse gas concentrations. They don’t go up, but they don’t go down either. In this simple scenario, the climate system gets a chance to catch up and reach a new equilibrium. However, this is not zero emissions scenario, in which we stop all emissions and the concentrations of greenhouse gases start to slowly decrease as the earth sucks them up.

With that in mind, the results show that taking into account the pattern effect should increase committed warming. For concentrations that stabilize at 2020 levels, if we wait centuries for temperatures to equilibrate, total warming since pre-industrial times grows from about 1.3°C to 2.3°C. (We have up to experienced a warming of about 1.1°C so far.)

An alternative version of this scenario makes short-lived gases and particulate matter disappear; the ultimate warming of 1.6°C to 2.8°C grows here. By limiting this very long-term view to only the year 2100, warming increases from 1.3°C to 1.8°C, taking into account the pattern effect.

The exact numbers aren’t really the point here — the researchers note that using a different dataset for past ocean temperatures causes the differences to narrow. It’s the general finding – the existence of the pattern effect implies a more committed warming – that is potentially important. It could mean that if you really want to permanently limit warming to a certain target, such as 1.5°C or 2°C, you should opt for even lower emissions (or plan to actively release more CO2 later).

But this should not lead to fears that much more global warming is suddenly inevitable. A future with constant concentration is different from a future without emissions, and the final temperatures will come after quite a long time horizon. The real contribution of the study is to address a flaw in some methods to calculate our committed warming. And we must first show that we are committed to halting global warming if we want any of these scenarios – or better – futures to be our choice.