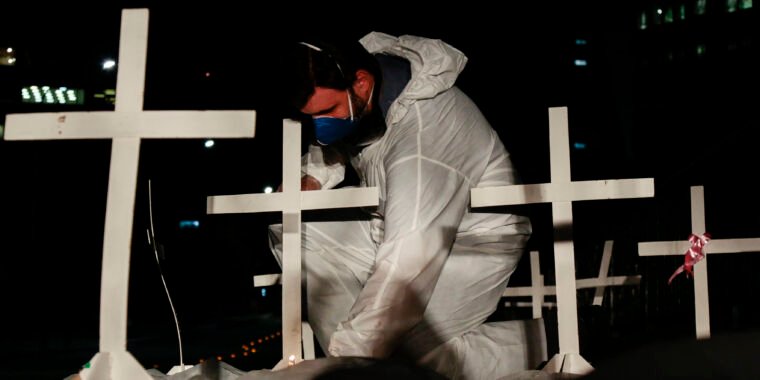 As deaths from the COVID-19 pandemic begin to level off and slow in some parts of Europe and the United States, the devastation is reaching a peak in Latin America.

According to an analysis by The New York Times, the death toll in cities and areas of Brazil, Peru and Ecuador is reaching alarming levels — five times higher than normal death rates in some places.

While some of the official death tolls from the pandemic remain low, a review of the mortality data by the Times reveals significant increases. The death counts include those directly from COVID-19 as well as those from other causes – which in some cases may be due in part to people not being able to receive standard levels of care while health systems are overwhelmed during the pandemic.

In the past two months, the number of deaths in Lima, Peru, has doubled from the historical average. In Manaus, the capital of the Amazon in Brazil, the number of deaths in April was about 2,800, three times the historical average. Gravediggers in the city have reportedly stacked coffins three layers deep in mass graves to try to keep track of the death toll.

In the port city of Guayaquil, Ecuador, deaths rose to five times the average — an increase comparable to the spike in deaths in New York City during the worst outbreak. Residents of Guayaquil were reportedly forced to leave corpses in cardboard boxes on the street for days.

SARS-CoV-2, the novel coronavirus that causes COVID-19, has slowly made its way to Latin America. But despite the delayed arrival, many areas are struggling to prepare. Guatemala and Haiti together only have about 100 ventilators, according to an article published last month in The Lancet Infectious Diseases. Mexico, the article also noted, has high rates of hypertension, obesity and diabetes, which are risk factors for serious disease.

“It’s a very difficult situation,” Alfonso Rodríguez-Morales, of the Colombian Association of Infectious Diseases, told the magazine. “Clearly, health systems have not been trained for the coronavirus; we had some extra time to prepare for the arrival of the disease, but some places are going to have a really hard time.”

There have also been issues with messages. In February, Mexican President Andrés Manuel López Obrador said COVID-19 “wasn’t even as bad as the flu”. Brazilian President Jair Bolsonaro dismissed the death toll and the need for social distancing. When asked recently about the rising death toll in the country, he replied, “So? My apologies. What do you want me to do?” according to the Times.

Nicaragua, meanwhile, has refused to impose social distancing measures, and there are media reports that the government is obscuring the scale of the outbreak. So far, only 25 cases and eight deaths have been reported in the country of about 6.5 million. The figure is probably a huge underestimate.

Even without accurate figures, the overall picture does not look good. “We are very concerned about how quickly the pandemic is spreading,” said Dr. Carissa F. Etienne, director of the Pan American Health Organization, Regional Office for the Americas of the World Health Organization (PAHO/WHO), in a press statement. May 12th. She continued:

In South America, health systems in major urban centers such as Lima and Rio de Janeiro are quickly becoming overwhelmed. We are also witnessing a similar impact of COVID-19 on major cities in the Amazon region.

When transmission is high in areas that function as regional hubs, neighboring areas are quickly affected – as people move through roads and rivers – affecting smaller towns and remote communities, including indigenous areas, where access to health care is a challenge. .

PAHO continues to coordinate response across countries, but we call on national and local health authorities to work even more closely together to contain the spread of the virus and support the capacity of health systems.