Report: NASA’s Only Realistic Path for Humans on Mars Is Nuclear Propulsion | Techilink 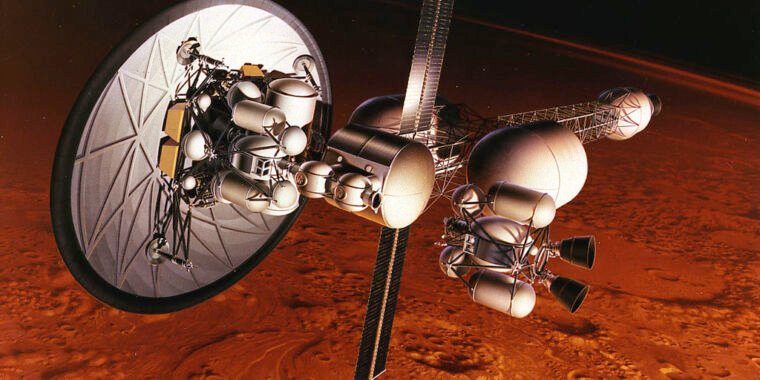 Getting people to Mars and back is quite difficult. Insanely difficult actually. NASA and other potential Mars pioneers face many challenges when planning missions to the red planet, but the most important of these is the amount of propellant required.

During the Apollo program 50 years ago, people went to the moon with the help of chemical propulsion, that is, rocket engines that burned liquid oxygen and hydrogen in a combustion chamber. This has its advantages, such as giving NASA the ability to quickly start and stop an engine, and the technology was the most mature for space travel at the time. Since then, some new propulsion techniques in space have been devised. But none are better or faster for humans than chemical propulsion.

That is a problem. NASA has some basic missions to send four or more astronauts to Mars, but relying on chemical propulsion to go beyond the moon probably won’t make it. The main reason is that it takes a lot of rocket fuel to send supplies and astronauts to Mars. Even in favorable scenarios where Earth and Mars line up every 26 months, a human-to-Mars mission still needs 1,000 to 4,000 tons of propellant.

If that’s hard to visualize, consider this. After upgrading to its Block 1B configuration, NASA’s Space Launch System rocket will have a payload capacity of 105 tons to low Earth orbit. NASA expects to launch this rocket once a year, and the cost will likely be about $2 billion for the flight. So getting enough fuel into orbit for a Mars mission would take at least 10 launches from the SLS rocket, or about a decade and $20 billion. Just for the fuel.

The bottom line: If we go to Mars, we probably need to think about other ways to do it.

A new report from the National Academies of Sciences, Engineering and Medicine offers some answers in two such ways. At NASA’s request, a broad committee of experts has assessed the viability of two propulsion devices — thermal and nuclear power — for a human mission launched to Mars in 2039.

“One of the main conclusions of the report is that if we want to send humans to Mars, and we want to do it repeatedly and in a sustainable way, nuclear space propulsion is on the way,” said Bobby Braun, director of planetary science . at the Jet Propulsion Laboratory and co-chaired the committee that wrote the report, in an interview.

The committee was not asked to recommend any particular technology, each of which relies on nuclear reactions but works differently. Nuclear thermal propulsion (NTP) involves a rocket engine in which a nuclear reactor replaces the combustion chamber and burns liquid hydrogen as fuel. Nuclear electric propulsion (NEP) converts heat from a fission reactor into electrical energy, such as a power plant on Earth, and then uses this energy to produce thrust by accelerating an ionized propellant, such as xenon.

“If you look at the committee’s recommendations for NTP, we felt that an aggressive program, built on the foundational work accomplished recently, could get us there,” Braun said of Mars’ 2039 target. Before NEP, we felt it was unclear whether such a program could get us there, but we didn’t come to the conclusion that it couldn’t get us there.”

Nuclear propulsion requires significantly less fuel than chemical propulsion, often less than 500 tons. That would be useful for a Mars mission that includes several advanced missions to prepare cargo for the red planet. The fuel economy of nuclear propulsion is also more in line with the launch capabilities offered by the orbits of Earth and Mars. During some conjunctions, which happen about every 26 months, the propellant needed to complete a Mars mission with chemical propellants is so high that it’s just not feasible.

A plan for NASA

If NASA wants to use nuclear propulsion in human missions by the 2030s, it must begin technology development immediately, the report said. So far, the agency has been somewhat reluctant to move quickly to nuclear propulsion. This may be partly due to the fact that the space agency has invested so heavily in the Space Launch System rocket and the chemical propulsion necessary for the Artemis Moon program.

That’s why NASA has not asked for funding for nuclear propulsion in recent years. Either way, Congress appropriated money for the effort. In the fiscal year 2021 budget, NASA received $110 million for the development of nuclear thermal propulsion.

Braun said it would cost significantly more — at least an order of magnitude — for NASA to work with the Department of Energy and other parts of the government to develop this technology and begin cargo flights to Mars in the mid-1930s. However, he said this is the kind of project NASA would be well positioned to undertake.

And what about the Starship concept that SpaceX is building to send humans to Mars? The project aims to tackle the problem of high chemical propellant requirements by developing a low-cost, reusable launch system. SpaceX engineers know it will take a lot of fuel to reach Mars, but they think the problem can be solved if Starship can be built to fly often and for relatively little money. The basic concept is to launch a spaceship into Earth orbit with empty tanks and transfer fuel launched by other spaceships into low Earth orbit before a single vehicle flies to Mars.

Braun said SpaceX is developing a plan to send humans to Mars with different assumptions than NASA. “I think there’s a fundamental difference in NASA’s assumptions about what kind of infrastructure is needed on Mars,” he said.

That’s not to say Starship can’t work. However, it does illustrate the challenge of setting up a mission to Mars using solely chemical propulsion. To use traditional propulsion, one has to push the boundaries of reuse and heavy rocketry to the extreme – which is exactly what SpaceX is trying to do with its fully reusable launch system.