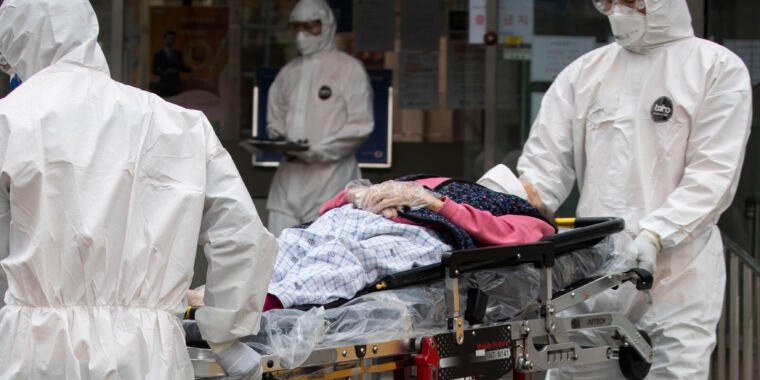 People who recover from COVID-19 but test positive for the virus again days or weeks later do not shed viral particles and are not contagious, according to data released Tuesday by the Korea Centers for Disease Control and Prevention.

The so-called “re-positive” cases have raised fears that infection with the new coronavirus, SARS-CoV-2, could “reactivate” in recovered patients or that recovering from the infection might fail to even produce transient immunity, which can immediately reinfect patients if exposed.

The new data from Korea should allay those concerns.

KCDC researchers examined 285 cases who had previously recovered from COVID-19 but then tested positive again. The patients retested sometime between one and 37 days after they recovered from their initial infection and were released from isolation. The mean time to a second positive was about 14 days.

Of those cases, researchers checked for symptoms in 284 of them. They found that 126 (about 48 percent) did indeed have symptoms related to COVID-19.

But none of them seemed to have spread the infection. KCDC examined 790 people who had close contact with the 285 cases and found that none of them were infected by the “re-positive” cases.

Crucially, additional testing of 108 “re-positive” cases revealed that none of them shed any infectious virus.

KCDC on RT-PCR for SARS-CoV-2

The type of tests that suggested the 285 people tested positive for COVID-19 a second time were so-called RT-PCR (reverse transcription polymerase chain reaction) tests. These tests are usually used to diagnose a COVID-19 infection. They do this by recognizing and copying unique, targeted fragments of the SARS-CoV-2 genetic material.

That seems to be the case here. When KCDC researchers tried to isolate and grow whole, infectious particles of SARS-CoV-2 from the 108 cases they were able to test, all 108 were negative for the entire virus.

Furthermore, when they did further blood tests on 23 of the re-positive cases, nearly all (96 percent) had neutralizing antibodies to SARS-CoV-2. This indicates that they may have some immunity against re-infection with the virus.

It is unclear what caused the symptoms in many of the patients. A few cases tested positive for other respiratory viruses, but many did not.

Still, based on the data, the KCDC has determined that re-positive cases are not contagious and do not require re-isolation.