Real wish or drunken regret? A “do not resuscitate” tattoo is confusing doctors | Techilink 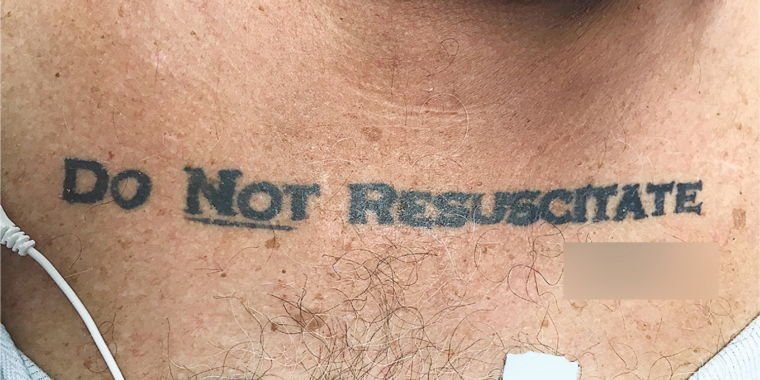 It is well known that patients have difficulty communicating their end-of-life wishes clearly to those who are in control at critical moments, usually doctors and family members. But in case anyone was wondering, tattooing your wishes on your body doesn’t clear things up.

Emergency room doctors in Florida struggled to figure out how to respectfully care for an unconscious 70-year-old man with a chest tattoo that read “Do Not Resuscitate” followed by what appeared to be his signature.

This is according to a case report published Thursday in the New England Journal of Medicinethe doctors said:

This patient’s tattooed DNR request caused more confusion than clarity given concerns about its legality and likely unfounded beliefs that tattoos can be a permanent reminder of regrettable decisions made while the person was intoxicated.

The unconscious patient was taken to the emergency department by paramedics. He had a high blood alcohol level and no identification or family on him. After a few hours, hospital staff saw his condition deteriorate. His blood pressure dropped and acids built up in his blood.

Despite the prominent tattoo, the doctors weren’t sure whether to trust it. They contacted social workers to try to locate his immediate family and made several attempts to resuscitate him enough to get him to confirm his wishes. But the revival attempts failed.

“We initially decided not to honor the tattoo, invoking the principle of not taking an irreversible path when faced with uncertainty,” the doctors said. But the effort the patient seemed to take to get the message inked on his body gnawed at them. After stabilizing him, they called for an ethics consultation.

The ethics advisers sided with honoring the tattoo. “They suggested it was very reasonable to conclude that the tattoo expressed authentic preference, that what could be seen as caution could also be seen as ceremonial insistence, and that the law is sometimes not flexible enough to support patient-centered care and respect for the interests of the patients,” the doctors recalled.

Fortunately, social workers found his patient information at the same time, including a copy of his Florida Department of Health “out-of-hospital” DNR order, which matched the wishes of his tattoo. “We were relieved to find his written DNR request, especially since a literature search identified a case report of an individual whose DNR tattoo did not match his current wishes,” the authors write.

The patient, who had a history of chronic obstructive pulmonary disease, diabetes mellitus and atrial fibrillation, continued to deteriorate throughout the night. He died without further resuscitation attempts, as requested.