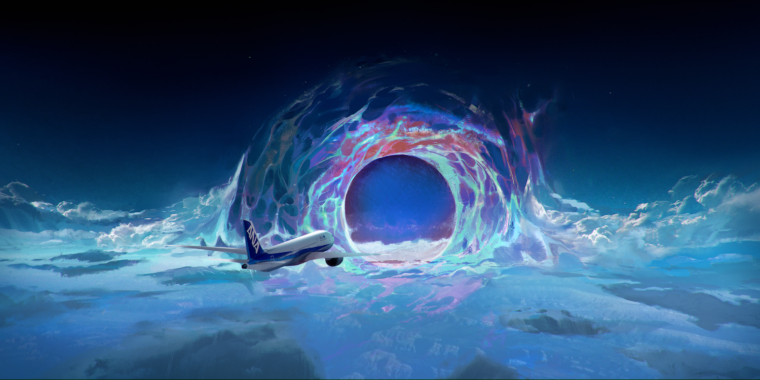 A flight from Tokyo to San Francisco jumps through time and lands 20 years in the future. That’s the abbreviated version of a writing assignment taken on by 22 of today’s most exciting science fiction writers, each of whom contributed stories about the flight’s temporarily disrupted passengers in an anthology called Chair 14C. Now you can read the book online for free, and I guarantee you’ll be captivated.

You’ll find original stories by Hugh Howey, Nancy Kress, Chen Qiufan, Bruce Sterling, Charles Yu, Charlie Jane Anders, Margaret Atwood, Madeline Ashby, Gregory Benford, Daniel Wilson, Eileen Gunn, and more. Each author interpreted the prompt in his or her own way, resulting in a compelling selection of very different types of stories. Twenty-two incredible artists illustrated the stories, and we have a selection of their work in the gallery above. Some of these stories are about strange new technologies, others are about social change, and others are about the tragedy of being stuck in an unknown future.

This anthology is the Science Fiction Advisory Council’s first XPRIZE project (full disclosure: I’m on the council, but I haven’t worked on this project). That means this anthology is also a competition, so you can submit your own story about the flight. The author of the best story will receive a $10,000 prize package, including a trip for two to Tokyo.

Here’s the full prompt for the stories:

On June 28, 2017 at 4:58 a.m., passengers aboard ANA Flight 008 en route from Tokyo to San Francisco at an elevation of 37,000 feet, approximately 1,500 nautical miles off the west coast of the United States, when the following seemingly inconspicuous incidents occur in front of:

ANA Flight 008 then passes through a transient ripple in the local space-time region, which is experienced in the cabin as a barely perceptible turbulence. The beverage service continues uninterrupted. The movie falters in flight and then resumes. As the Boeing 777 descends through the clouds on its approach to SFO, only a few passengers suspect they’ve arrived at the wrong destination. Which isn’t right, sort of. They arrived at San Francisco International Airport… on June 28, 2037. The wrinkle transported them 20 years into the future.

Spend the weekend reading these stories about reluctant (and a few not so reluctant) time travelers. And if you get inspired, write your own and enter the contest!