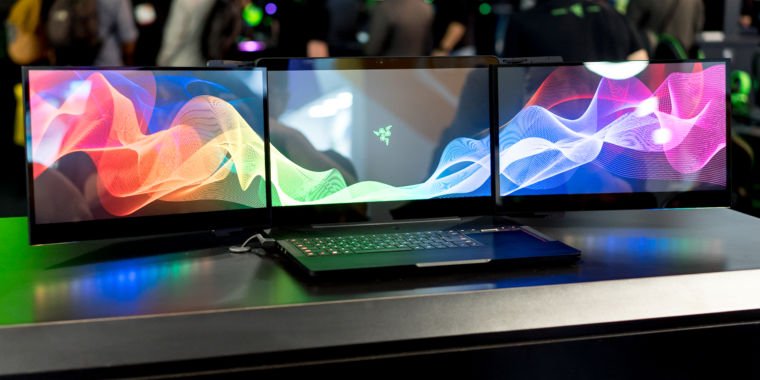 Razer is best known for its line of sleek gaming laptops, but the company is also making headlines for its eccentric experimentation. Following in the footsteps of the Razer Switchblade, the Razer Edge and the modular Project Christine desktop, this year the company is showing off “Project Valerie,” a 17.3-inch concept laptop that takes a Razer Blade and puts three 4K monitors in it. .

The three 4K displays are compatible with Nvidia’s G-sync technology and are powered by an Nvidia GeForce GTX 1080 GPU. As good as that graphics chip is, especially for a mobile product, it should be noted that a single mobile GPU isn’t enough to run most games at 4K on a single screen, let alone three of them. But for games where a super-wide aspect ratio is more important than bumping the settings to Ultra, it could be an interesting alternative to a hulking desktop gaming PC and multi-monitor setup.

Razer also points out the potential productivity benefits of a three-monitor setup that is widely available. People who edit videos and Word documents aren’t exactly Razer’s target audience, but recent products like the Razer Blade Stealth notebook show the company trying to expand its appeal to non-gamers.

Razer describes Project Valerie as a concept, meaning that (like so many other things we see at CES) it may never see the light of day. But Razer is known to bring these concepts to market when they have been received with enough enthusiasm – the Razer Edge started life as “Project Fiona”, another CES concept product. In any case, Razer gets full marks for ambition.