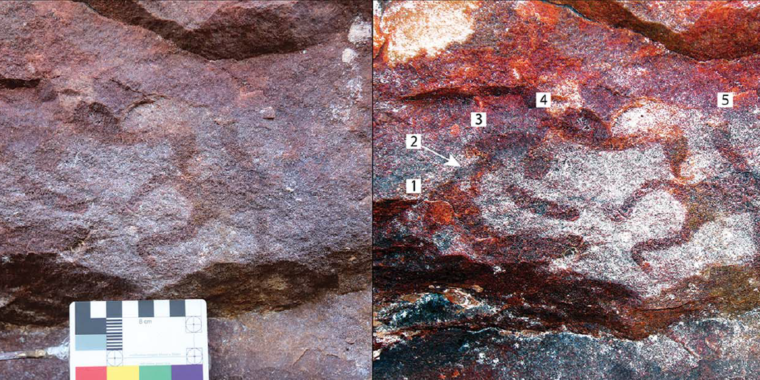 Ancient artists used different techniques to paint pictures on rock. Sometimes they drew by hand, but other times they placed an object such as a hand, a leaf or a boomerang against the wall and sprinkled it with paint, leaving a mist of color behind a silhouette of the object. This may sound like a simple way to produce art, but there is new evidence that it can be quite a complex process. People in Northern Australia appear to have used beeswax to form miniature stencils to paint on the walls of Yilbilinji Rock Shelter in Limmen National Park.

Welcome to the land of Marra

The thumbnail images are part of a veritable gallery of rock art on the roof and back walls of Yilbilinji. For thousands of years people came here to paint people, animals, objects, tracks, dots and geometric motifs in striking red, yellow, black and white. There’s even a European smoking pipe in the mix, proving that at least some of the paintings must have been done after the settlers arrived.

Of the 355 images painted on the walls, only 59 are stencils – outlines of large hands and forearms surrounded by sprays of white pigment (probably made with local kaolin clay). But 17 of those stencils are too small to have been done the usual way, by sprinkling a real object with paint to leave a life-size outline on the wall. They depict people – sometimes with boomerangs and shields or with headdresses – crabs, echidna, at least two species of turtles, kangaroo paw prints and geometric shapes.

And those stenciled miniatures are some of the only ones of their kind in the world, with the exception of a tiny human figure stenciled on a cave wall in Indonesia and one in a rock shelter in New South Wales, Australia.

Of course, most of the drawings and paintings left behind by ancient people are smaller than life size, but it is much easier to draw a scaled-down version of an aurochs or a person than to stencil a. Unless you take the time to make a model or template for yourself first, that is. And that seems to be exactly what the artists of Yilbilinji – traditionally the domain of the Marra people – did.

In which archaeologists look after their beeswax

Archaeologists and anthropologists working with Marra rangers noted that most of the miniature stencils had rounded edges and appeared to have been sprayed over something that fitted snugly against the contour of the rock. That suggested the stencils were something soft and easy to shape, such as clay, resin, or beeswax. And beeswax seems like the most likely option.

Today, the Marra and other people of northern Australia still use beeswax as glue to repair spears, harpoons and other tools; most men carry a beeswax ball as part of their personal gear, just in case. But kids also carry beeswax, which they mold into animals, people and other objects – think of it as organic play dough. Flinders University archaeologist Liam Brady and his colleagues wanted to find out if molds of beeswax could also be used to make stencils on stone, so they decided to play with some beeswax themselves.

Once warm and soft, it only took a few minutes to mold the beeswax into different shapes that looked like Yilbilinji’s stencils. Brady and his colleagues glued their beeswax stencils to a piece of sandstone and sprinkled it with white kaolin clay paint and water. The results were very similar to the Yilbilinji paintings.

That suggests beeswax might work, but is that really how the Yilbilinji artists made their miniature stencils? Brady and his colleagues have not been able to date the paintings and have not tested the rock shelter walls for microscopic traces of beeswax, resin or other soft, sticky material, but they hope to return with the appropriate equipment on a later trip.

What do these miniature motifs mean?

The meaning of the stencils is harder to figure out than how they were made. “No information has been obtained about the potential meaning or significance of our Marra employees,” Brady and his colleagues wrote.

For the Marra, Yilbilinji Rock Shelter is a site associated with Karrimala, one of the ancestral beings who traveled through Australia during the Dreamtime to create the continent’s landforms, plants, animals and people. Karrimala created the rock shelter and placed himself on the wall in the form of a painted serpent. In the past people lived in Yilbilinji; the floor of the rock shelter is still dotted with stone tools, grindstones, and a stone-ringed fireplace.

At another rock shelter in Limmen National Park, Brady and his colleagues found small beeswax figures still clinging to the walls. The Marra men who worked with the archaeologists told them that those figures were involved in a certain ritual, a ritual that they were even nervous about. Men whose families had the right connections to certain places and who knew the right songs to sing could use pictures on the walls of those places to magically attack their enemies, the Marra men told Brady and his friends. colleagues.

But they also told the archaeologists that Yilbilinji Rock Shelter isn’t a site associated with that sort of thing.

“What’s important here is that this discovery adds a new dimension to the Australian and global rock art record,” said Flinders University archaeologist Amanda Kearney, a co-author on the study.