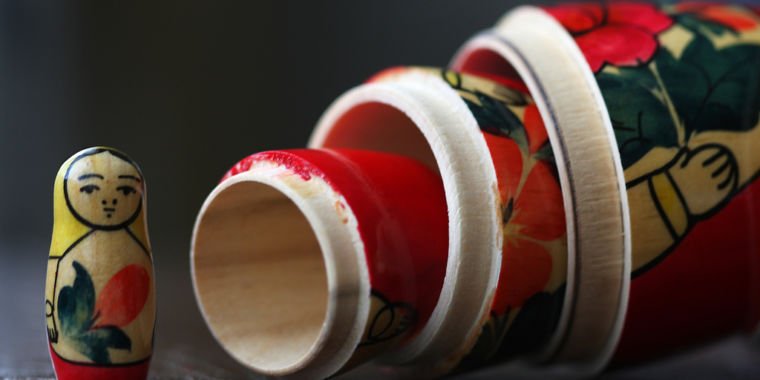 The article is not only theoretical in nature, but seems to overcomplicate a fairly simple argument. That probably means I’ve misunderstood it pretty thoroughly. So, let the mistakes begin.

The inner doll is solid

Suppose I have a single particle with a quantum mechanical property called spin. We don’t care what spin is, just that it has an orientation in space. I can measure the orientation of the spider. But quantum mechanics won’t let me measure it in a general way; I can’t ask, “Hey, Frank-the-quantum-particle, which direction is your spin pointing?” Instead, all I can do is ask, “Hey, Frank, is your spider pointing up or down?” on which he will always answer with an “up” or a “down”.

This is true even if Frank’s spin was sideways (and has no up-ness or down-ness at all). In this case, it picks up or down randomly. We cannot predict the result of the first measurement at all, but all future measurements on Frank give the same result: once up, always up. On the other hand, if Frank’s spider was down before the measurement, the answer will always be down.

If the prepared spin status is up or down, Bob and I always agree on the outcome of the experiment. But if the spin is sideways, we don’t. Bob states that the spider is in a superposition state of up and down, while after I take the measurement I say it is down.

This isn’t really a paradox: Bob just doesn’t know I took the measurement. As soon as he is informed, we will agree on the result. Note that Bob doesn’t measure initially; he makes a prediction, and it is the prediction that he is wrong.

If Bob and I disagree on the upward direction and take our measurements, we can get different results. I measure the spin and record an up. Bob measures the entire box and reports that the spider was down. But we can solve this by sharing which direction we think we are going. In all cases, the disagreement revolves around the lack of shared knowledge.

Now that we have our first quantum layer, let’s make it even more complicated.

I’m – even though I’m almost out of oxygen – still in the box. The spin state is now being prepared by Alice (who is also in a box), who uses a coin to select sideways (tails) or spin down (heads). She sends me the object with its spin, as well as what she measured.

Alice throws tails. That means I will only measure spin-down with a 50 percent chance. If I measure the spider to be up, then I know that Alice threw tails. And Bob, having taken his measurement, will also say that Alice threw tails. Bert agrees. Not only do they all agree, but Bob, Alice, Bert and I can predict, based on our own knowledge, that we will all agree.

Let’s run the experiment again. Alice throws tails again. But I measure spin down. I know the probabilities, so my box is in a superimposition of Alice-threw-heads and Alice-threw-tails. When Bob takes his measurement, he gets one of those results at random. Bert, on the other hand, will always get coins because Alice and her chest know that the toss was coins. Based on his measurements and knowledge of the rest of us, Bob cannot correctly predict our predictions. And not only that, Bob and Bert disagree on heads or tails.

Sure, once Bob knows that Bert has measured tails, he can understand the disagreement, but by then it’s too late and both Alice and I have died of suffocation. Bob and Bert are later given five years for the accidental death of two graduate students.

You can’t all be quantum mechanical puppets

What is the meaning of the disagreement between Bob and Bert? It apparently tells us that a quantum system with knowledge of quantum mechanics cannot be self-consistent. That, in turn, means that one of the following three statements about reality must be true:

From there we fall into the depths of philosophy. We can and have debated for decades what a measurement really means in quantum mechanics. This article highlights the fact that we still haven’t — and may never have — solved that problem.