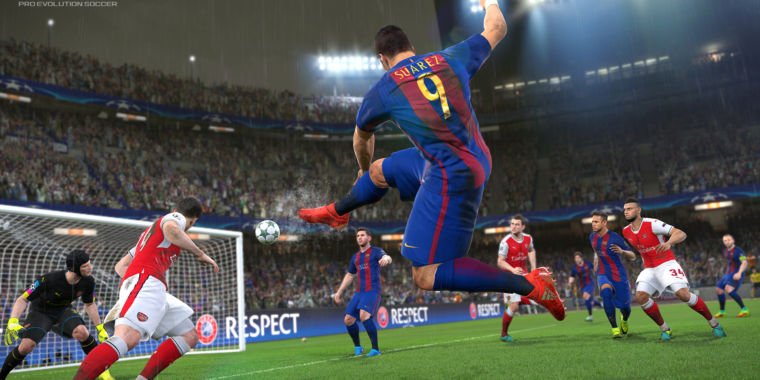 There are many ways to interpret the beautiful game. Some teams prefer to keep the ball on the turf. Others prefer to launch it into the air. Defending deep in your own half is an option, as is driving up the field towards the opponent. And do you play physically, or cerebrally? There is no right or wrong approach in football as long as you play by the rules.

PES 2017 continue this tradition. Barcelona, ​​Manchester United, Juventus and Paris-Saint Germain all play very differently in real life, and it shows well in PES. Football is a simple game made complicated by countless approaches it offers players, teams and managers. No other game comes as close to replicating those intricacies with a pair of analog sticks as PES is doing.

Easy said, PES 2017 is the best football game ever made.

As a Liverpool fan, the first thing I do as soon as I start a football match is to take control of The Reds and use Jürgen Klopp’s frenetic, heavy metal kind of football. Thanks to the game’s many tactical options, this is easy to do. You can have Firmino, Coutinho, Mane and Sturridge close the opposing defense when they have the ball, putting pressure on them to either quickly clear their lines or foul if they pass.

Combine that with instructions for full-backs to attack higher up the pitch when in possession, and your wingers to cut in at every opportunity, and you’re extremely close to how truly Liverpool are currently playing under their German coach. All you have to do is conced at least one goal every game and the rendering is almost perfect.

Implementing tactics is great, but they are pointless unless the players themselves make the most of their abilities. A lot of time and effort has gone into upgrading the AI ​​and player actions – and it shows. Simple concepts, such as players catching the ball when under pressure, to more advanced concepts, such as isolating a single defender against your best striker, run together in perfect harmony.

It’s a joy to have your target player pluck a rushed clearance from the air on his chest, followed by a graceful breakaway from a midfielder in an attempt to launch the perfect counter-attack. All individual aspects of ball control – displacing, passing, sprinting and shooting – were closely interwoven to create a compellingly realized whole. It’s tremendously immersive: I’ve completed an entire season as Liverpool in one weekend, winning the FA Cup, even managing to keep a few clean sheets.

Essentially, all of these different tactics are not unique to human players. When playing against the AI ​​you run the risk of running into a number of strategies, with weaker teams often relying on kicking the ball long to overcome a weak midfield, while stronger teams play with much more confidence.

To combat this, you must rely on your own computer-controlled players to pull their weight. If you get into trouble, you can take a chance, throw yourself into a slide tackle and hope the referee doesn’t blow the whistle. But there is less than ever an excuse to use such desperate tactics to avoid goals. Defenders are adept at following the instructions you give them, whether that’s a guy marking a key attacker or taking zonal positions to take out passing lanes. Sliding into an opponent’s ankles should only be necessary when playing against someone with the dribbling talents of Messi or Griezmann.

So there is a nice balance between direct control and tactical management. Given the range of ways to play, you are clearly at a disadvantage if you think that only your individual skill on the ball will win a game. Maze runs and incredibly accurate shots from outside the box can score a few goals, but you won’t win the cup if you can’t figure out how to keep Man City’s midfielders from overloading your defence, or West Brom’s Rondon coming free. heads in the box.

Embracing this combination of skillful play and management brainstorming opens up the game immensely. With the right approach, you can nullify the best teams with your underdeveloped minnows, liberate them PES 2017 of the fetishization of only the best clubs and players in the world. Playing as Huddersfield can be more satisfying than playing as Barcelona, ​​as you focus your efforts on reducing an opponent’s strengths, rather than falling back on the team’s innate talent.

In that sense, this is a game for the football hipster, the kind of person who extols the virtues of managers, players and formations that few others have heard of. The offer certainly benefits those who can draw on deep football knowledge and think outside the box.

However, as with even a Guardiola team, there are some weak spots. Goalkeepers make good decisions and rarely get caught when it comes to knocking out a striker or attacking a cross aggressively. But stopping their shot raises eyebrows. On a number of occasions I have both scored and conceded from shots from long range that have hit goalkeepers directly, with the ball sailing straight over their shoulders. The quality of the defense keeps scorelines realistic, but when such a foul occurs it messes with your suspension of disbelief.

Then there’s the recurring problem of what the game looks like outside of matches. Menus are as hideous as they’ve always been, the gross, flat boxes used to frame match and lineup options have nothing in the way of aesthetic charm. Conducting transfer negotiations in Master League career mode is therefore made more annoying and confusing than it otherwise would be. Even performing the basic task of scanning the rankings is inexplicably painful.

As usual, brand licenses in PES is also very limited. A number of leagues have been officially branded, as have some clubs, but the vast majority of teams are shown the same fake names and kits we’ve become accustomed to: London FC is Chelsea, Hampshire Red is Southampton, Man Blue for Man City.

If you’re playing on PlayStation 4, solving the problem is easier than ever, as you can download and apply a single option file that updates every kit, badge, and team name to the real thing. This isn’t officially produced by Konami, as that would presumably have violated licensing restrictions, but it’s still easy and safe enough to find.

Still, the fact remains that the majority of players, especially those who only play sports games, probably won’t like the idea of ​​having to download something onto their PC and install it on their console. Given the dominance of a certain other football game in the licensed department, I’m looking at you FIFA 17– it’s unclear how PES can come up with a solution right now.

Even if you decide not to update your teams to the real thing, and considering the 1980s presentation, PES 2017 is the best digital soccer game you can have. The precision of players and the strategic options at your disposal result in a highly technical, yet thoroughly engaging game that comes closer to the real thing than any other game. It inspires you to come up with original ways to approach matches, and unorthodox tactics to apply in teams.

PES 2017 asks you how you want to interpret the beautiful game. There is no greater praise for a sports game.

Verdict: Consider yourself an attentive football fan? This is for you.