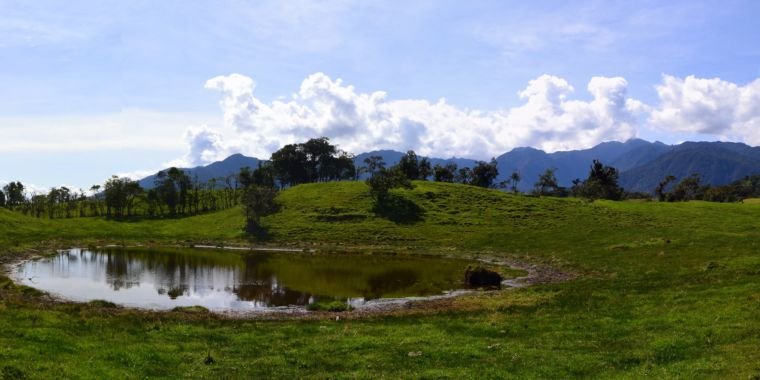 On the slopes of the Quijo Valley in northern Ecuador, perennial clouds envelop the canopy of a seemingly pristine tropical forest. But behind the beauty of the cloud forest lies a violent, tragic history. A new study of sediments from Lake Huila in the valley reveals centuries of indigenous agriculture that abruptly ended in warfare and fire around 1588.

From about 1400 to 1532, the Quijos Valley marked the eastern border of the Inca Empire. Although subjects of the Empire, the people of the Quijos Valley maintained a different cultural identity from the Incas, and historical and archaeological records show that the valley was a trade channel between the Inca area and the peoples of the Amazon Basin.

The first Europeans to set foot in the Quijos Valley were Spanish expeditions in 1538 and 1541, who arrived in search of gold and cinnamon. They estimate that about 35,000 indigenous people lived in the region. By 1577, about 11,400 people had gathered around the Spanish town of Baeza, which the colonizers had built in 1559 along with the native community of Hatunquijos. But by 1600, three out of four of these people were dead.

Many died of European diseases, which plagued the unexposed populations of the New World. Others perished under the Spaniards encomienda system of forced labour, and many more died in a series of revolts against the Europeans between 1560 and 1578. By the mid-nineteenth century, only three small huts remained in Baeza.

So it’s no wonder that European travelers passing through the Quijos Valley around that time marveled at the cloud forests, assuming that the landscape was untrodden by human feet and unworked by human tools. But the mist-shrouded trees and flowers of Quijos’ cloud forests hide a long history of human settlement in the valley, which ended only through conquest, disease and violence. And every chapter of that history has been preserved in the sediment at the bottom of Lake Huila, a 98-meter-wide depression on a lava terrace 8,500 meters above sea level.

Open University ecologist Nicholas Loughlin and his colleagues took two core samples from Lake Huila. The top 20 inches of each core contains about 700 years of sediment that washed into the lake, with pollen from local plants, charcoal from fires and bits of broken pottery.

In the layers deposited before European arrival, the lake’s sediments contained pollen reminiscent of an open landscape, dotted with amaranth, rue, grasses and cultivated cornfields. When people started growing maize in the Quijos Valley is not clear, but there is archaeological evidence of maize farming in the neighboring Amazon lowlands dating back 6000 years.

The pre-Columbian lake sediments also contain high concentrations of charcoal, along with spores of a charcoal-loving fungus species called neurospora. That’s evidence that “local burning occurred in an environment where intact mountain cloud forest rarely burns naturally,” Loughlin and his colleagues wrote. That means people lit fires in the valley, either to clear fields, cook food or make pottery. The presence of pottery shards in the ancient lake sediments provides further evidence that humans settled in the Quijos Valley centuries before Europeans showed up.

End of an era

But around 1588, the bottom of Lake Huila contains evidence of a catastrophe. The amount of charcoal in the sediment cores suddenly increases by two orders of magnitude in those layers, coincidentally coinciding with historical accounts of open warfare in the Quijos just after the largest of the rebellions. Documents from the period describe attacks on Baeza and the total destruction of two nearby settlements, Archidona and Avila. The charcoal in the lake’s sediments is most likely the residue of those fires.

Thereafter, the corn pollen abruptly disappears from the sediment cores, giving way to grasses, aquatic plants, and the pioneer trees and shrubs that begin to move in when a cleared landscape is suddenly uncleared.

Those microscopic pieces of pollen paint a picture of abandoned farmland being reclaimed by nature at surprising speed. By 1718, less than a century and a half after the destruction of 1588, pollen records show that the cloud forest, with its distinctive trees, shrubs and flowering plants, had returned to the slopes of the Quijos Valley. And by the mid-19th century, where there had once been cornfields and open grassland, visitors saw only “a dense forest, impenetrable except by tribulation” in a valley “unpopulated by the human race.”

From an ecological perspective, that’s a strangely comforting story. It means that tropical cloud forests, given just under 150 years, can recover from centuries of mining and reclamation.

But the cloud forest’s resilience has not gone unchallenged. By the time those visitors to the Quijos Valley wrote home about its pristine forests, Ecuador had won its independence from Spain, and people were already moving back to the valley, clearing the land for ranching and settlement. The cores of the lake contain less forest pollen and more of grasses and flowering meadow plants, mixed with the spores of fungi that thrive on cattle manure.

“The apparent wilderness described in the 19th century represented a shifted ecological baseline,” the authors wrote. The cloud forests they saw on the slopes of the Quijos Valley looked pristine, but they were already beginning to be disturbed by human activity.

Yet the people of the 19th century had less influence on the environment than the people who lived there before colonization. Loughlin and colleagues compared the pollens in sediment layers from the past 700 years with the pollens in layers of lake sediment deposited long before the first humans moved into the region thousands of years ago. They found that the period before 1588 was most strikingly different from the original pre-human cloud forest. Even settlement and livestock grazing since 1819 disturbed the cloud forest less than pre-Columbian agriculture.

It was difficult to understand exactly how and to what extent pre-Columbian people in Central and South America changed their environment with agriculture, irrigation and construction. Different cultures have left different traces in the landscape and archaeologists are sometimes still surprised by what they find under the dense vegetation. But Loughlin and his colleagues say this study suggests we’ve generally underestimated how drastically pre-Columbian people in South America affected their environment.

Today, the bottom of the Quijos Valley is mainly cattle pasture, interspersed with islands of forest, while the cloud forest still clings to the steeper slopes of the valley, high above the banks of the Rio Quijos. It is a strikingly beautiful landscape, but there is more here than meets the eye.