“Prepare to Die” in Dark Souls: The Board Game |Techilink 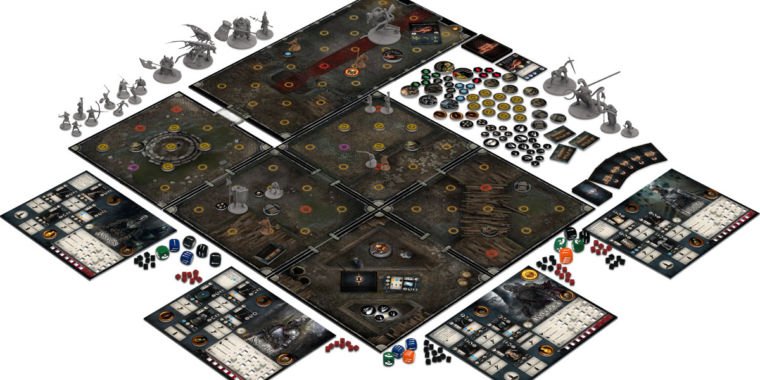 It’s surpassed now, but last year for a while dark souls had the honor of being the most lavishly funded board game ever on Kickstarter.

The campaign brought in £3.77 million ($4.8 million) for Steamforged Games, a small and largely unknown British company, which was lucky enough to land the license for one of the most respected video game series of the past decade.

As a board game, the draw was clear: dozens of large, beautiful-looking miniatures depicting the Gothic majesty of dark souls‘ iconic villains to life – all in an £80 ($105) package that looked like it cost a lot more. (Included in the rewards were a series of expansions, which haven’t come out yet, although some are pretty close).

So does dark souls the board game matches the video game series? The answer is “yes” – but with more than the usual number of caveats.

For starters, the thumbnails are a bit disappointing. They’re made of strangely soft plastic, presumably because they come assembled, and the stiffer material used to make other gaming minis is more likely to break in transit. Nevertheless, many of the smaller figures unfortunately have hanging arrows and curved swords. Several of my boss models, meanwhile, arrived with fractures in certain slender joints, though Steamforged was very accommodating with replacements. In addition, the detailing of the figures – many of which only existed as renders at the time of Kickstarter’s launch – varies greatly between characters. The runes on the Arch of the Silver Knight are amazing; the bland fabric of the robe of the Dancer of the Boreal Valley is not. The designs are good enough, and they absolutely embody dark souls‘ moody aesthetic, but for a product based on the awesomeness of its miniatures, it’s an odd angle to cut.

mechanical, dark souls mimics his parents as much as possible while trying to differentiate himself from the many other dungeon crawlers out there. It’s certainly not a derivative, and fans of the genre will appreciate the care that went into producing a game that is so unlike anything else on the market. There’s an innovative system for players to balance stamina – a renewable resource – with harder-to-renew health points, both of which are captured on one track. If these trailing cubes intersect, you’re dead, like the infamous dark souls motto reminds you. The gear system is also smart; Player boards allow you to place upgrades as you find them. It all works like a sharp simulation of the video games.

But the thing with video games is that computers do all the math for you, while direct tabletop ports often involve piles of finicky accounting. This becomes apparent when you encounter monsters on your first obscured board tile. One card tells you what to place on each of the small glowing nodes (chests, barrels, mobs, and treasures), while more cards tell you how each of the monsters behaves. Much of the game depends on how you deploy your heroes before an encounter begins. For example, make sure that charging skeletons can’t hit you on the first turn.

Battles, especially at low levels, are often brutal and short duels in which your men can barely take two blows before they expire and you lose a scarce, precious life. This doesn’t leave much room for much nuance, as the low-level monsters, while armored, only have one life, and the round tends to be over in about four turns, strangely lacking in depth. Then you heal all your wounds, collect the loot, get dressed and go again. And then you do it over and over, and maybe four more times to make sure you have enough gear to take on a boss, and that’s where the game gets more interesting.

Yes, the original dark souls Games are really all about grinding this way, but it’s less fun when you spend half the time setting up the same six types of grunt in different configurations, and the only piece of ground is on the featureless and rather claustrophobic room tiles. .. barrels.

But in the boss fights, dark souls really shines – another parallel with the video games, and one that the designers may have nailed a little too well. Once your team finally has enough ground to get through “the fog gate” to the boss arena, the slog turns into a strategic, ballet-like attempt to observe patterns and then learn when to punch and when to run.

The bosses are divided into mini-bosses and main bosses, although mega-bosses will be added in subsequent expansions. You fight the former before the latter – with another quick round of higher-level grinding in between, of course – and they almost make up for the interstitial detail. Bosses revolve on stacks of behavior cards, which are much more complex than the garbage collectors and mirror the moves these bosses make in the original games. Depending on what type they are, these bosses can blast around the board, jump from player to player, perform devastating attacks or scurry around trying to put you down with a full-body hammer.

Even though it’s essentially an inert miniature that wraps around a simple tile, the system is incredibly dynamic. So when the Dancer draws a card that allows her to go to the players, spinning and slashing with two extra reps, the players honestly get an incredible sense of movement that’s much more satisfying than boss monsters in other dungeon crawlers, who often just pocket hit points with bigger attacks that don’t really do anything jazzy.

That said, the cards are so full of symbols that it can be quite difficult to parse the behavior and decide exactly what the monsters should do. You can visualize for quite some time exactly where the players are relative to a bow attack that spawned from a sudden lunge across the board or where they end up after being pushed out of the way. Once you understand the notation, however, these are tense and challenging encounters that intensify in two-thirds of the time, when a random “warm-up” card is introduced from an additional deck, inevitably with a terrifyingly deadly extra attack.