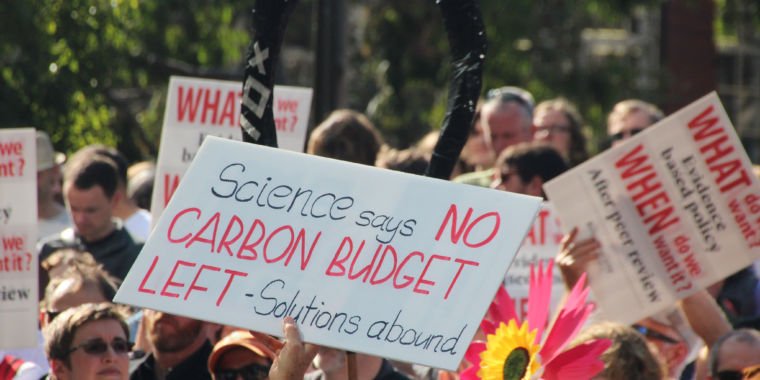 In The protector, the headline read: “Paris ambitious climate target of 1.5°C still possible, new analysis shows.” But at Breitbart, readers were told that “Climate alarmists are finally admitting that ‘we were wrong about global warming’.” Other headlines pretty much span the entire range between these two. Grit to the mill was a new study published in Natural Geosciences by a group of well-known climate scientists, but different news channels baked very different breads with it.

That happens quite often these days, but in this case, the new study was especially complex and more easily misunderstood — even by those without a Breitbartian aggressive ideological bias against climate science.

The story inside Natural Geosciences starts with a widely used figure from the latest report of the Intergovernmental Panel on Climate Change. The figure was intended to more easily reflect the impact of future greenhouse gas emissions. It turns out that the relationship between global warming and the total amount of greenhouse gas emissions since the industrial revolution is about a straight line (at least for the foreseeable future). So instead of trying to match the accounting of greenhouse gas emissions with one of myriad scenarios of future gas concentrationsdo you have a much simpler way of describing our situation: limiting warming to less than X degrees you may not emit more than j CO2. This is the so-called “carbon budget”.

But maybe understanding the Natural Geosciences story isn’t as simple as finding yourself on that chart and doing a little subtraction. The new study – led by Oxford’s Richard Millar – shows that this graph may be underestimating how much “carbon budget” we currently have before we hit 1.5 or 2 degrees Celsius. And that’s where this gets complicated.

Between 1870 and 2015, our estimate of the total amount of greenhouse gas we emitted is 545 ± 75 billion tons of carbon, which has increased the concentration of CO2 in the atmosphere to just over 400 parts per million. But the model simulations won’t reach 545 gigatons until the 2020s, when the concentration in the atmosphere is higher and the world is a bit warmer than it is now.

So if you follow the model relationship, 615 gigatons of carbon emissions is enough to take you to 1.5 degrees Celsius of warming – the most ambitious limit in the Paris International Agreement. Since we currently emit more than 10 gigatons per year, that was only a few years ago.

The researchers basically just realigned the graph to start in 2015 and at 545 gigatons of accumulated emissions instead of 1870 and at 0 gigatons. With virtual apple number 545 next to real apple number 545, it should be easier to ask how much space is left in the apple basket.

When the researchers do, their estimate adds an extra 130 to 170 gigatons to the carbon budget before we hit 1.5 degrees Celsius — a decade or more of emissions. That would of course be good news.

Here part of the story deviates from the facts of the investigation. Some interpreted this to mean that climate models overestimated global warming because they were too sensitive to changes in greenhouse gases. That led to the erroneous claim that the researchers had “reset” the projections of future warming from the latest IPCC report, downgrading future temperature rise. Two of the authors of the article have already gone to the pages of The protector to set the record straight.

In reality, this study does not change or dispute the projected warming in any way. The model simulations they relied on – done years ago now – are the same ones used for the IPCC report. The relationship between scenarios of greenhouse gas concentrations and global temperature is identical. The observed difference was just a matter of how the cumulative count of human emissions added up behind those concentrations.

In reality, those model projections have done an admirable job matching the observed rise in global temperatures in recent years.

Claim of a substantial gap between global temperature model projections and observations is false (updated with 2017 estimate): pic.twitter.com/YHzzXtbhs9

Over there to be some pretty important caveats to this study, like the lively Twitter discussion it produced among climate scientists can confirm. The exact amount of the remaining carbon budget is quite sensitive to how close you are to the 1.5 degrees Celsius warming, as you calculate, that we are currently.

There’s also a bit of uncertainty on the other side of the timeline — the baseline “pre-industrial” temperature. Some scientists argue for an earlier baseline perhaps 0.1 degrees Celsius cooler than the late 1800s baseline typically used, which now clearly puts us 0.1 degrees Celsius closer to 1.5 degrees Celsius above our pre-industrial reference point. would come. As Glen Peters of the Center for International Climate Research put it in a Twitter message“Every 0.1 °C is about 60 [gigatons of carbon] in the budget, so every 0.1°C change up or down makes a huge difference.”

Well, what are you going to do about it?

The researchers aren’t arguing that their estimate of the remaining carbon budget is exactly the right answer – there’s too much uncertainty to think you can pinpoint it that accurately. But they do think it’s closer to the correct answer than previous estimates. They write: “Consequently, limiting warming to 1.5°C is not yet a geophysical impossibility, but it is likely that 2030 commitments will need to be met, followed by challenging deep and rapid mitigation.”

How “challenging deep and fast”? Emissions should fall off a cliff in a short time and reach zero by 2080. That would require huge commitments beyond what the nations committed when they signed the Paris Agreement. But – this study reminds us – that’s a choice we could make.