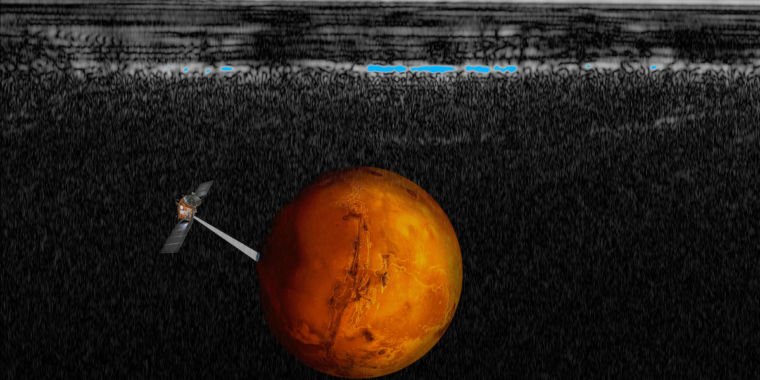 Today, a team of Italian scientists announced evidence that Mars has lakes of liquid water beneath its polar ice caps. While the evidence is somewhat circumstantial and requires some assumptions, the alternatives the researchers considered fit the data worse. The announcement is likely to get scientists thinking about how to use existing instruments in orbit around Mars to more closely examine this area.

Most parts of Mars spend much of the time at temperatures too low to support liquid water on the surface. Adding salt — and we’ve found plenty of evidence of salt on Mars — can lower the freezing point of water by turning it into a brine. But that’s not enough to overcome the extremely low pressure of the Martian atmosphere, which would cause ice to sublimate into vapor instead of melting.

So the only realistic hope for significant amounts of liquid water is below the surface, at enough depth to create enough pressure for salt to overcome the low temperatures. Calculations have suggested that these conditions may be met at the Martian poles, where there are large ice sheets made up of both water and frozen carbon dioxide. There are clear parallels to Antarctica, where lakes have been discovered beneath glaciers in different areas of the otherwise frozen continent.

But so far, no clear evidence of liquid water has surfaced, but the new evidence provides some strong evidence that it could be there.

The data comes from ESA’s Mars Express orbiter, which carries a ground-penetrating radar instrument called MARSIS. Underground imaging is based on the fact that boundaries between materials with different properties reflect part of the incoming radar signal. So while a layer of ice and a layer of rock can both be weakly reflective, the boundary created when ice sits on rocks will create a strong reflection that can be detected by a spinning radar. The interface between ice and water works the same way and produces a bright reflection.

MARSIS has now generated about 13 years of data, including multiple passes over the polar regions. Analysis of that data had already identified a highly reflective region under the thickest part of the southern ice sheet in an area called the Planum Australe. But that feature had been attributed to a boundary between the dust-containing ice that dominates the Martian surface and a layer of pure water ice that is expected to exist below. For this study, the Italian researchers revised that assumption and attempted to determine whether pure water ice was consistent with the radar data.

So the researchers did a rough calibration by recording the signal that bounced off when the radar hit the atmosphere/dusty ice boundary on the surface of Mars, as the composition of these materials is quite well understood. Combined with calculated temperatures at different depths, that calibration allowed the researchers to calculate a value for the reflections that occur at deeper levels. Although there are significant uncertainties associated with these values, they were used to estimate a window in which the true value probably resided.

Conveniently, the full range of these windows was greater than that of any material previously observed on Mars. In other words, even the lowest probable value was higher than the highest value we observed before. And comparable values ​​on Earth are usually generated only by materials that are wet or liquid. In Antarctica, all similar values ​​have been associated with liquid water. And if you try the same technique on areas outside the highly reflective areas, it produces values ​​comparable to those of dry volcanic rock on Earth.

There are other possible explanations for these types of signals, but the authors consider and reject them. To give an example, they consider a layer of carbon dioxide liquefied by the pressure. Although this layer could form under the conditions at the base of the ice sheet, its properties are such that you don’t get such a strong reflection. Other conditions they believe would produce similar reflections are unlikely to be found under a 1.5 km thick ice sheet.

It is tempting to think of this feature as a lake, as the area of ​​high reflectivity is several kilometers in diameter. But the radar returns could be produced by a layer of water less than a meter thick, so it could just be a thin layer of liquid covering the base of the ice sheet. And again, the liquid involved would be much saltier than Earth’s oceans (and the salts are likely perchlorates, which aren’t as common on Earth).

Before we get too excited about drilling 1.5km into Mars’ poles to search for ice, though, we probably want independent confirmation that this highly reflective region appears consistently and behaves as if it were liquid water. Conveniently, there’s another radar instrument called SHARAD orbiting the Red Planet on the Mars Reconnaissance Orbiter. SHARAD operates on different frequencies than MARSIS, but it is also designed to pick up underground features.

Obviously, if the results hold up, they would have a big impact on how we think about the prospects of life on Mars. While a frozen, high-pressure, saline environment with no apparent energy input isn’t a great place for life to emerge, it’s possible a previously formed ecosystem could be scraping by using some chemical energy scavenged from the rocks beneath — we have examples of that process on Earth.