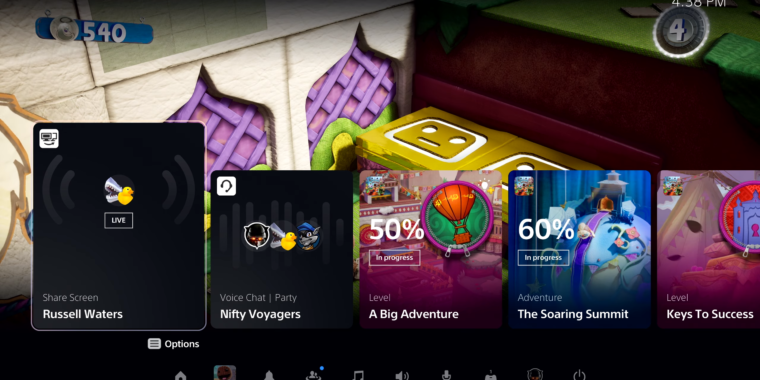 Sony’s drip feed of PlayStation 5 information continued on Thursday with a surprising reveal of the upcoming console’s “Control Center” interface. Sony has typically been optimistic about updating its system menus between console generations, and the PlayStation 5 is clearly no exception.

The biggest feature revealed in this week’s video is “Activities,” a system-level addition to most consoles’ “trophy” or “achievement” lists. In the case of PS5, when you play a supported game, you can use the Control Center to see levels, missions, or objectives available in your game (content you’ve already accomplished or unlocked, no spoilers). The idea is that you may have been blown through a platform level from start to finish, but missed hidden items and collectibles needed to unlock a PS5 trophy.

Tap one of these activity cards and you’ll quickly load into the relevant part of the game (allowing you to use the PS5’s NVMe 4.0 load time boosts), then get a series of hints for any objectives or collectibles you missed. Now if you’re a paid PlayStation Plus subscriber, you can tap these hints to see photos or videos showing you the way instead of reaching for a nearby phone or laptop to search for a user-created tutorial . Then tap an additional button to leave these hints open in picture-in-picture mode.

Sony’s video doesn’t make it clear in how many games we should expect these hints and whether Sony could build these hints and systems itself for non-Sony games. As it stands, it’s up to individual game developers to build activities and related hints.

The video also confirms a funky picture-in-picture option for at least one type of video content: your friends’ gameplay feeds. This requires your friend to tap “share screen” on their own system, after which you can flip their video feed onto your screen, either as part of a special column or as an embed on top of your own gameplay.

At Ars Technica, we don’t like watching friends’ gameplay feeds while playing games. One game at a time here, please. But we have other ideas for the feature, which is currently raising an interesting question. While the rest of the video took a look at the “main menu” interface, which is accessible with a double tap of the PlayStation button and more closely resembles PS4’s game library interface, the video’s narrator made it clear that Sony wasn’t. t ready to unveil PS5’s “media” suite of features.

Xbox One launched with “Snap” as a way to embed media apps in a sidebar next to the game you were playing, but turned off this feature in 2017. Disabling the feature opened up more processing power for games, among other things. But the PS5 seems to have plenty of power for things like video streaming; This means we can expect media apps like YouTube, Twitch or Netflix to act like picture-in-picture feeds, allowing you to watch your favorite binge-worthy series while flipping through daily newspapers in Lot 2† warframe, and such? At the moment, Sony says no.

This second gallery offers a look at the main menu interface, which was only briefly explored in the video. Among other things, it seems to confirm that the PlayStation Store interface is now tied directly to the main menus rather than requiring a separate app to be launched, and the ad-filled “Explore” tab essentially keeps the rest of the game-choosing interface. clean instead of placing ad-filled blocks on standard pages.

Plus, we finally got confirmation of what we’d long assumed: that the DualSense controller’s built-in microphone enables instant voice-to-text messaging should you want to quickly send a message or photo caption to friends without having to hunt and peck through a on-screen keyboard.

If you’re looking for more PS5 clues, the original video is embedded below.