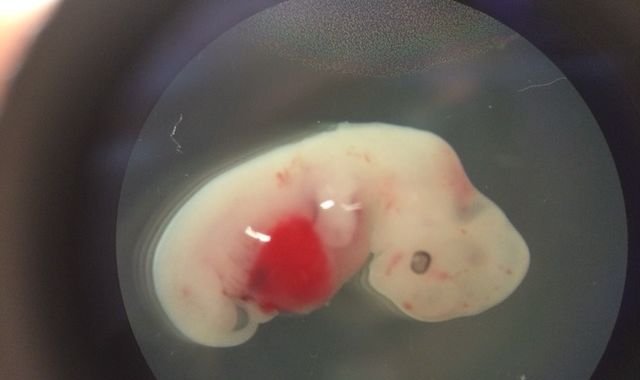 Scientists have successfully created pig embryos containing a small fraction of human cells, according to a study published Thursday in Cell.

The study, led by researchers at the Salk Institute in California, represents an important step toward human-animal hybrids that could one day grow whole new human organs for transplantation. At the moment, the pig hybrids contained only about one human cell in 100,000 pig cells and were very difficult to make. And due to ethical guidelines, the researchers only allowed them to develop for about a month. But researchers are optimistic that they will be able to tackle the technical and ethical challenges in the future.

They certainly have a lot of hints that they will be successful.

To show that cells from two different species can share one body in harmony, the researchers also created mice with rat organs. They used a snazzy new genetic engineering tool called CRISPR/Cas9 to break a pair of genes in mouse embryos that undermined their ability to properly develop several organs, including the pancreas, heart and eye. Next, the researchers injected the embryos with rat stem cells and then transferred the embryos into a mouse’s uterus to develop. The embryos developed into healthy animals with hybrid organs from mice and rats, the researchers discovered. In fact, the rat cells even developed into gallbladders in the mice, despite the fact that rats do not have these organs. The animals all lived a normal mouse life of up to two years.

And another group led by Stanford researchers reported this week that they too had created a mashup: a rat growing a mouse pancreas. The researchers used a similar technique to the Salk researchers, but they took the extra step of transferring pancreatic cells from their hybrid rats to diabetic mice. The transplant restored insulin production and reversed the disease in the diseased mice. That study, which provides a proof-of-principle for cross-species organ transplants, was published Wednesday in Nature.

The final step is to allow cells from distantly related species to coexist. The Salk team turned to cows, pigs and humans. For the human cells, the researchers used induced pluripotent stem cells (iPSCs), normal adult cells that have been chemically coaxed to revert to a stem cell state.

A sticking point in the past has been getting iPSCs to take root in an embryo, which requires their development to be synchronized with that of the embryo’s cells. So the researchers tried to prepare the iPSCs for organ development. They injected them into embryos at different stages — unprimed, moderately primed, and fully primed. They found that the moderately primed specimens did best at surviving and integrating into the embryos.

The researchers also genetically engineered the cells to produce a green fluorescent protein so they can easily spot them in animal embryos.

The researchers tested a cow-human hybrid, but it was difficult and expensive to work with, so they focused on the pig-human hybrid. The scientists made pig embryos in petri dishes and then injected them with human iPSCs; a total of 2,075 injected embryos were implanted in 41 sows. Only 18 of the sows became pregnant and 186 embryos survived. Of those, only 67 appeared to contain human cells, based on the green glow, and only 17 looked normal after 21 to 28 days of development. The rest looked underdeveloped, suggesting that the human cells were interfering with pigs’ normal development.

So it worked, but not well. The researchers are now moving forward with experiments using pig embryos that have genetic modifications that could make them more hospitable to human cells.

In the meantime, ethicists are urging researchers to think carefully about their experiments and the implications for animal rights and the lives of humanoid creations, especially those with humanoid brains and reproductive organs. Currently, the U.S. government has a ban on using federal funding to support human chimera research. (The new study was conducted largely with private money.) Last August, however, the National Institutes of Health announced they were reconsidering the ban.