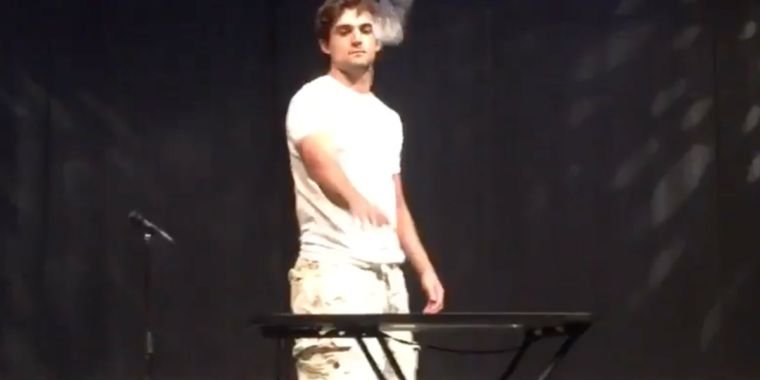 The water bottle flipping craze, where a partially filled bottle of water is flipped over and magically lands upright, took the world by storm a few years ago. Now a group of Dutch scientists has designed a classroom demo version of the feat, described in a recent article in the American Journal of Physics. It is designed to illustrate the principle of conservation of angular momentum and includes helpful tips on how to maximize your chances of successfully performing the trick.

The whole craze started in May 2016 when Michael Senatore, a high school student, trotted onto a stage and successfully flipped and dropped a water bottle on the table at his school’s annual talent show. The crowd went wild and someone in the audience captured the performance with a smartphone camera. The resulting 30-second YouTube clip has been viewed more than 8 million times and sparked a spate of copy attempts around the world. The Backyard Scientist performed a version with a mercury-filled cylindrical container.

Explanations for the underlying physics also quickly circulated, based on slow-motion representations of the movement of both the bottle and the liquid inside. The consensus: The movement of the bottle through the air causes the liquid to climb up the sides, redistribution of mass and increasing the bottle’s moment of inertia. That has a dampening effect on the rotation, slowing it down just enough for the landing to stick.

Think about how skaters stretch their arms and legs to slow down the rotation that comes from jumps or spins. It’s the same principle: conservation of angular momentum. Once the bottle is set in motion, the angular momentum remains constant. But shifting how the mass is distributed inside (the water) increases the bottle’s rotational inertia (how much force it takes to start it or keep it moving). This slows down the rotational speed of the bottle.

Physicists from the University of Twente in the Netherlands decided to analyze the underlying physics more thoroughly in a series of rigorous experiments and develop a theoretical model. For the first version of the experiment, they used a partially filled water bottle. For the second version, they reduced the variables from the large number of water molecules in the bottle to just two tennis balls in a cylindrical container.

In both cases, their measurements clearly showed the dramatic decrease in the container’s rotational speed, resulting in a near-vertical descent so that the bottle landed cleanly and upright. Tracking the sloshing of the liquid and the changing positions of the tennis balls showed the redistribution of mass, shifting the moment of inertia.

If you’ve ever tried this yourself, you know the trick doesn’t work with a full bottle: there’s not enough room for the water to move, so you don’t get the same shift at the moment of inertia. But how much water is optimal has been a matter of debate. Anecdotally, the optimal water level in the bottle should be between one-fourth and one-third of the container. That agrees with a 2012 paper on the impact dynamics of hollow spheres partially filled with liquids, which concluded that a container filled to 30 percent is the optimal amount to achieve the crucial damping effect. And it ties in with the predictions of the Twente scientists’ model.

Best of all, both experiments can be easily replicated in the classroom, making the water bottle flip trick more than just a momentary fad. It is an ideal tool for teaching undergraduate students the basics of rotational mechanics.