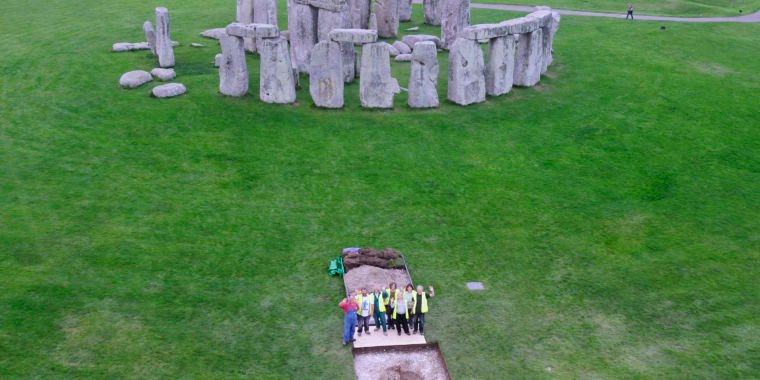 New chemical analysis of cremated remains unearthed at Stonehenge suggests that several of the people buried there came from further west, possibly even from the same area of ​​Wales as the ‘bluestones’, the shorter, bluish-gray stones that make up the inner ring of the monument.

Over the past century, archaeologists have delved into the details of Stonehenge’s construction, but have largely ignored the 58 people buried in a ring of 56 shallow pits, now called Aubrey Holes, surrounding the monument. Until recently, the cremated remains of these ancient Britons didn’t have much to tell archaeologists, as the heat of the cremation tends to destroy most evidence about where people came from and how they lived.

But strontium has been shown to withstand the heat, giving archaeologists new clues as to where the people buried at Stonehenge spent the last years of their lives.

Relatively light elements such as carbon and oxygen are changed by the high temperatures, changing isotope ratios that give archaeologists information about the history of a bone, but strontium is a heavier element and is not changed by the heat. “The high temperatures reached alter the structure of the bone, making the bone resistant to post-mortem exchanges with burial soil,” said lead author Christophe Snoeck, a geochemist and archaeologist at the Vrije Universiteit Brussel. Ars.

Different rock types have different ratios of isotopes of the element strontium. Strontium-87 is the radioactive decay product of rubidium-87, so the strontium-87 to strontium-86 ratio of a rock depends on the initial amounts of both isotopes, the initial levels of rubidium-87, and age. As the strontium dissolves in the rock, plants absorb it through their roots. When animals (including ourselves) eat plants, we take in strontium, which replaces some of the calcium in our bones. So the ratio of strontium isotopes in your bones can be traced to the area of ​​rock where your food was grown (modern food supply systems will really confuse future archaeologists).

In the Wessex Cretaceous which lies beneath Stonehenge and the rest of the Salisbury Plain, strontium isotope ratios usually fall between 0.7074 and 0.7090. But 125 miles (200 km) to the west, over a vast area of ​​western Britain that includes south-west Wales, those values ​​are much higher, near 0.7110.

So Snoeck and his colleagues took samples of skull fragments from 25 individuals. Based on other bone fragments, six of those individuals were likely female, nine were likely male, and the sex of the other 10 could not be determined. Three of the 25 were juveniles, and the other 22 were adults.

Most strontium isotope ratios fell within the limits of the Wessex Cretaceous where Stonehenge stands, meaning these 15 people spent the last decade or so of their lives eating foods grown within about 9 miles of the monument. But 10 of the people sampled had higher ratios, suggesting their diets were grown in soils far west of Stonehenge in their last decade. Several of them had strontium isotope ratios somewhere between those before the Wessex Cretaceous and Western Britain, so they may have lived only a few miles away, but others’ ratios were high enough to suggest that they almost certainly lived much further. to the west, over a hundred miles away, and somehow be buried in Stonehenge.

But that story may not be as simple as it seems. Strontium isotope ratios in bone only record a person’s diet for about the last ten years of life, so that’s all the data can tell us. The people who spent their final years in West Britain may have lived there all their lives and then either moved to the area around Stonehenge or was brought there for burial, but it is also possible that they lived in earlier life. Wessex or elsewhere . Those with proportions somewhere in the middle range may have lived and died a few tens of miles northwest of Stonehenge, or those proportions could be a mixture of time spent in Western Britain and Wessex, perhaps traveling back and forth. There’s a lot of complexity in people’s life histories that we just can’t see in the snapshot the strontium isotope analysis provides.

But it’s clear that not everyone buried in Stonehenge has lived in the area all their lives, and some of them may have even died far away from the monument where they were buried.

“It shows that the choice to be buried in Stonehenge was not just limited to those who lived in/near Stonehenge, and so the site wasn’t just used by a ‘local community,'” Snoeck told Ars. And it suggests that people, as well as building materials, moved regularly through Britain as early as 5,000 years ago, and those movements created social, spiritual and ostensibly personal connections between regions.

And there is some evidence to support the idea that regardless of their life history, the people buried at Stonehenge made the journey posthumously after being cremated at home.

Cremation, as Snoeck said, usually destroys the carbon-13 ratios in bones, which would otherwise provide information about the person’s diet. Instead, the carbon-13 ratios in cremated bone usually mirror those in the wood used for the pyre — which usually depends on how much light the trees received as they grew. Trees from relatively open landscapes, such as the calcareous lowlands near Stonehenge, tend to have higher carbon-13 values ​​than trees grown in denser forests, such as those in south-west Wales. And the bones of the people buried in Stonehenge had a wide range of carbon-13 values.

Their cremations, Snoeck and his colleagues say, likely happened under different conditions, using different woods as fuel, and it seems likely that they took place in completely different places. Some people buried in Stonehenge may have died and cremated in Western Britain and then made the 200km to Stonehenge for burial. That lines up with reports by archaeologists from the 1920s that the remains looked as though they had originally been placed in the Aubrey holes in leather bags, giving the impression that they had been “brought from a distant place to be buried.”

At the time, the site was difficult to recognize for modern visitors; the distinctive Sarsen stones would not be erected until around 2000 BCE. Within an earthen wall, the Aubrey Holes formed a wide circle around a central open space. Wooden posts, or perhaps the blue stones, stood in most of the Aubrey Holes, perhaps marking the cremated remains buried there. Radiocarbon dates of the remains span centuries, from 3,180 BCE to 2,380 BCE, so we know the site served as a burial ground for nearly a thousand years, although clearly not just a local one.

But we still don’t know why ancient Britons would carry some of their dead such a long distance to bury or how they chose which of their dead to bury in Stonehenge. Snoeck and his colleagues suggest the burials may have occurred in conjunction with the transportation and raising of the bluestones, which is an especially interesting idea given recent suggestions that the bluestones were first erected in the Aubrey Holes and on top of the cremated remains would have stood.

“Looking at the spread in the radiocarbon dates (over several centuries), I don’t think this was a single event,” Snoeck said. Ars.

We already know that the bluestone, a mixture of rhyolite and mottled dolerite, came from the Preseli Hills in West Wales. For some of them, chemical analysis has even narrowed down which quarries they came from: Craig Rhos-y-felin and Carn Goedog. And that region of Wales just happens to fall within the area of ​​western Britain that matches the strontium isotope ratios in Stonehenge’s bones. But the isotope analysis alone can only point to a broad area of ​​similar geology. (In fact, it’s technically possible that those 10 non-local people buried in Stonehenge came from somewhere in Scotland, Ireland, or continental Europe; Snoeck and his colleagues just consider it far less likely due to the distance and/or crossing the water. ) So it is impossible to say from the strontium data that these people lived in Wales.

But since there is already a connection with West Wales, it is not unreasonable to suggest that at least some of the people of Stonehenge came from the same place.