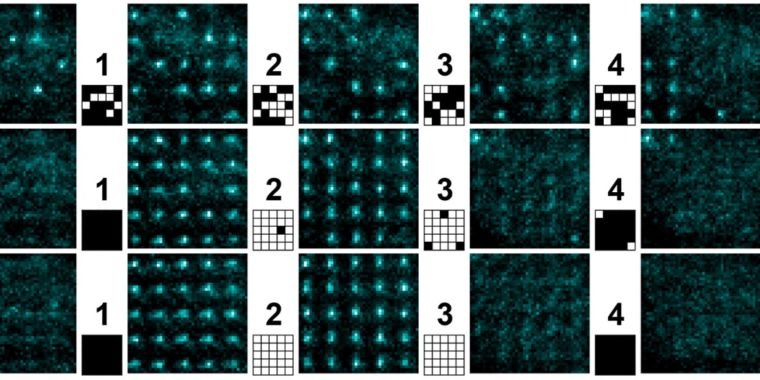 Physicists at Penn State University have devised a quantum equivalent of a famous 19th-century thought experiment, which is capable of creating order in a series of randomly distributed atoms. Such highly ordered blocks of atoms could one day be used as quantum gates in a quantum computer. The physicists reported their findings last week in Nature.

Around 1870, James Clerk Maxwell (father of the famous equations for electromagnetism that every physics student learns in college) devised a thought experiment that offered a possible loophole. He imagined a little gnome able to bring order to a closed container filled with gas. The imp achieved this by flowing heat from a cold compartment to a hot compartment, apparently in violation of the second law. The two compartments would be separated by a wall with a hatch covering a hole just large enough for a gas molecule to pass through.

Maxwell’s hypothetical imp would sit on top of the dividing wall and open and close the hatch at will. Gas molecules would generally be highly disordered (high entropy), in the sense that they have approximately the same average velocity and temperature, and would therefore be close to equilibrium. So there wouldn’t be much energy available for “work” – defined in physics as the force over a certain distance (W=fd).

Since the atoms that make up the molecules are in constant motion, there will be small fluctuations over time. Whenever the demon sees a molecule moving slightly faster near the hole in the right (cold) compartment, it will open the shutter and let it through to the left (warm) compartment. It does the same for all slow-moving gas molecules in the left compartment, allowing them to get into the colder right compartment. So the molecules in the left compartment get hotter and hotter, while those in the right compartment get colder and colder, in an apparent reversal of entropy. Once you have that temperature difference, you basically have a heat pump that can do useful work.

“Physicists have devised clever experiments to bring a version of the demon to the lab.”

Statistically, of course, it’s nearly impossible to sort and separate billions of individual molecules by speed or temperature – a bit like throwing a glass of water into the sea and thinking you can get exactly the same glass of water back, down to the last identical molecule. . In principle, an enormous amount of extra energy would be required. Maxwell’s demon provides that extra energy, so the thought experiment is not a true closed system and there is no violation of the second law.

In recent years, physicists have devised some pretty clever experiments to bring some version of the demon into the lab. For example, in 2007, Scottish scientists devised an “information ratchet” to create a temperature difference in chemical systems that would otherwise be in thermal equilibrium. The following year, researchers at the University of Oregon came up with an ingenious version that involved using laser light to create a box, with two other lasers serving as a trap door and a sorting “demon,” respectively. Japanese physicists discovered how to lure a nanoscale bead onto a spiral staircase in a 2010 paper Nature, based on Szilard’s engine concept. And in 2013, German scientists built an experimental equivalent of Maxwell’s demon from a pair of interacting quantum dots (tiny pieces of semiconductors just a few nanometers wide).

The demon in the lab

“Many attempts have been made to devise experimental systems that behave like a demon,” acknowledged David Weiss, team leader and co-author of the new Penn State paper. “There have been some successes on a very small scale, but we have created a system where we can manipulate a large number of atoms and organize them in such a way that the entropy of the system is reduced, just like the demon.”

His team used three pairs of laser beams to trap neutral (uncharged) cesium atoms and cool them to ultra-cold temperatures (a few degrees above absolute zero) in a 125-position 3D grid (a 5×5×5 cube) . They filled half the positions with atoms in random positions, then moved the atoms by changing the polarization of the laser traps — the equivalent function of Maxwell’s demon, except they used position to sort them instead of speed. In this way, they were able to create ordered 5 × 5 × 2 or 4 × 4 × 3 subsets within the originally disordered lattice, reducing the entropy of the system.

The trick is in the ultra-cold temperatures, according to Weiss, because under those conditions, “the entropy of the system is almost entirely determined by the random configuration of the atoms in the lattice.” If the atoms weren’t supercooled, rearranging them would have little effect on the overall entropy of the system. The Penn State scientists were able to reduce the entropy in their experiment by a factor of about 2.4.

That makes this a promising option for building qubits. Using neutral atoms for quantum computers is challenging because their lack of charge makes it difficult for them to interact with each other enough to get entangled. This is usually achieved by inverting the state of one qubit depending on the state of a second qubit through a quantum version of a NOT gate.

But there is a high error rate with this method. By reducing the entropy in an atomic trap, we can create better quantum gates with fewer errors — which is exactly what Weiss and his team achieved.