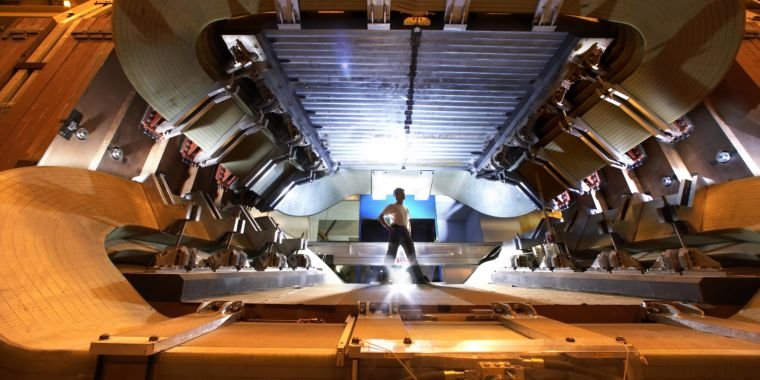 The Large Hadron Collider has generated a staggering amount of data over its years of operation; it’s enough data that we’ll be analyzing for years after the collider shuts down. In the meantime, priority has been given to searching for big-ticket items such as the Higgs boson (sign) and dark matter particles (MIA). But over time, some other analyzes have succeeded and begin to yield unexpected results.

In the current universe, quarks are held together by gluons to form particles such as protons and neutrons. In the first fractions of a second after the Big Bang, however, the Universe was too hot and too dense for this to work. Instead, there was a thick soup of quarks and gluons that freely mixed instead of precipitating out to form particles.

This quark-gluon plasma was first detected at Brookhaven’s Relativistic Heavy Ion Collider, and the LHC was designed to study it at higher energies. Time is set aside annually for collisions with lead atoms, which contain many protons and neutrons and thus provide the quark-gluon plasma with a lot of starting material. But a new paper inside nature physics indicates that it may not be absolutely necessary to slam heavy atoms together to create the quark-gluon plasma; the protons used in normal collisions are sufficient.

The telltale sign that this is happening is the presence of an excess of strange quarks, a heavier, unstable relative of the up and down quarks found in normal matter. Strange quarks are often produced in proton-proton collisions, but they are produced in greater numbers when a quark-gluon plasma is present. We’ve seen that in both Brookhaven and the LHC during lead ion collisions.

But the new paper indicates that the same thing happens in proton-proton collisions. There is a preference for the production of strange quarks that is independent of the energy collision, but this correlates with the number of particles produced during the collision. This is the same behavior we see with lead collisions.

(The authors refer to the production of strange quarks as “strangeness”, leading to some strange sentences such as: “Strangeness is produced in hard (perturbative) 2 → 2 partonic scattering processes through taste creation and taste excitation. Strangeness is also created during the subsequent partonic evolution via gluon fission.”)

The authors conclude that we probably form a small amount of quark-gluon plasma during proton-proton collisions in the LHC. And the similarity between the results produced there and those produced by colliding heavier particles suggests that there is a single physical mechanism underlying the formation of quark-gluon plasma. So further study of this process with protons can help us better understand this mechanism and thus the behavior of the universe in its earliest moments.

Does that get you some muons?

The quark-gluon plasma produced by collisions disappears almost immediately, as the constituents quickly find partners and form stable particles composed of two or more quarks held together by gluons. Some of these are known, such as protons and neutrons, but others are unstable and not observed outside of high-energy events. The B mesons fall into that category, because they’re made of a heavy, unstable lower antiquark bonded to a lighter (and possibly unstable) partner.

One of the four detectors in the LHC, LHCb, specializes in identifying B mesons and observing their decay. It was built because this decay allows for multiple tests of the Standard Model, making deviations from the predictions relatively easy to spot. And when it comes to muons, LHCb sees a weak but consistent pattern of anomalies.

Muons can be seen as a heavier relative of the electron – they have the same charge but differ in mass and stability. From the perspective of standard model interactions, they are interchangeable. Any decay that produces an electron can also produce a muon, and it does so at a frequency that depends only on the mass difference between the two types of particles.

So if we see something different, it’s a sign that something weird is going on that isn’t explained by the Standard Model. According to CERN, we are seeing something strange. In a recent conversation, the LHCb team described its analysis of data on B0 meson decay, which should produce a pair of electrons or muons.

However, instead of seeing the predicted number of muons, the experiment has a muon shortage. However, the deficit is not great; the current statistical significance is only about 2.4 sigma. That’s well below the five sigma it takes to announce a discovery, and it’s comparable in magnitude to hints of discoveries that have vanished in light of additional data. In other words, a result of 2.4 sigma alone is not enough to excite physicists.

The difference here is that this result is not an isolated one. Previous work on the decay of another type of B meson decay compared the number of muons produced with the number of taus (the heaviest of the electron-like particles). Again, muons were produced at slower than expected rates, but the numbers did not reach statistical significance. In this case, however, two other particle accelerators had already produced similar results.

The good news is that these results were largely generated from an analysis of early data from the LHC. There is much more data to look through, and the muon shortage is now likely to become a high priority as computational time becomes available.

Both of these recent results are a nice reminder that while the public is focused on the excitement of new particles, the truly revolutionary stuff may eventually emerge from a strange anomaly hiding among familiar things. While this may eventually lead to new particles, you don’t need them to know there must be something new.