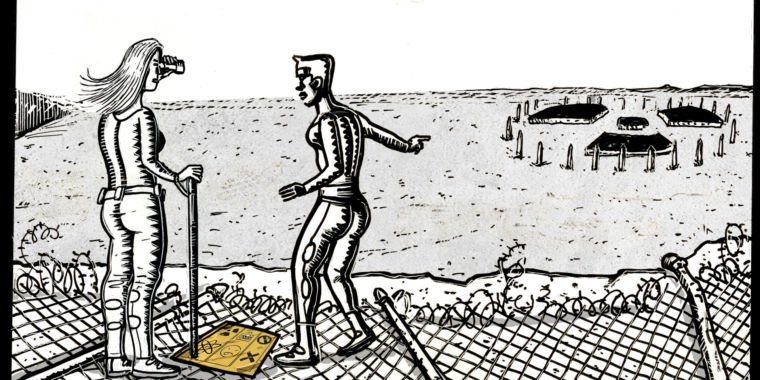 These are the questions the new observational documentary asks containment, which will be broadcast on PBS’ Independent lens tonight at 10 p.m. ET. While directors Peter Galison and Robb Moss don’t provide straight answers, their interviews with nuclear waste experts, policy directors, and people involved and involved with nuclear sites are thorough and down-to-earth.

containment focuses solely on the dangers of nuclear waste from both nuclear weapons projects and nuclear energy, often lumping the two efforts together in a way that can come across as an unjustified censorship of nuclear energy, whose benefits in the face of climate change are barely mentioned. But ultimately the message seems to be that a rational and pragmatic approach to waste storage, not clouded by the delusion that any site can be completely and totally safe, is necessary.

The film opens with Bob Forrest, former mayor of Carlsbad, New Mexico, talking about the WIPP – to date the only site in the US approved for the long-term storage of radioactive waste. The WIPP has seen a significant amount of controversy because of an explosion that happened in 2014, which effectively shut down the factory for two years and cleared away billions of dollars. Traces of radiation escaped from the underground waste facility, though no Carlsbad residents were affected, according to the Department of Energy. The WIPP has been approved to reopen in 2017 (PDF), but containment contains footage from Forrest and other scientists who say the radioactive containment at the WIPP was virtually impenetrable, which has clearly proven not to be the case.

After Carlsbad, we see footage of the 2011 earthquake and subsequent tsunami that damaged the Fukushima Daiichi factory and prompted the evacuation of local residents en masse. Next we head to the Savannah River Site in South Carolina, built in 1950 to develop materials for nuclear weapons. Today the nuclear waste is shipped from here to WIPP. All the while, the documentary shows how managing the dangers of waste from nuclear weapons and nuclear energy was, until recently, an afterthought.

A critique of containment is that it is difficult to say when the footage was shot and when the interviews will take place. Some appear to be recent, others must have happened years earlier. The liquid waste at the Savannah River Site is portrayed as the most dangerous of the three sites we visit. And at one point, an expert talks about encasing the liquid waste in molten glass to store it more stable. But the public remains unsure about how this project is progressing and whether it is an important part of the site’s cleanup efforts at all.

“Keep Out” signifies a future world

Rather than focusing on the ever-evolving present, much of the documentary is devoted to the fascinating question of whether and how to warn the distant future of the dangers of radiation poisoning. Decades ago, Congress decreed that the WIPP could not be built until warning markers were created to urge people living 10,000 years in the future to stay away from the site. In 1990, the Department of Energy convened a group of astrophysicists, futurists, architects, linguists, and so forth to develop “break-in scenarios” so that the waste site could best prevent accidental entry by humans.

Science fiction author and astrophysicist Greg Benford, who was part of the group devoted to burglary scenarios, spoke of the challenge of thinking that far into the future. “10,000 years is the span of human civilization… no nation-state has survived more than about 1,000 years,” he said. “The United States is only a little over two centuries old. I know it seems like it should last forever, but it doesn’t. Even languages ​​don’t last very long. It’s about 1,000 years.”

The experts suggested that somehow warnings should encompass all of WIPP to, say, prevent people building an underground train from Houston to Los Angeles from drilling a tunnel through the Carlsbad site. Its location would also need to be marked from the surface to let aircraft and satellites know what’s there. The burglary scenarios discussed by the panel are presented for illustration in the documentary, giving much of it a graphic novel feel.

Carl Sagan collaborator and artist Jon Lomberg, who was also part of the 1990 group, is interviewed about whether markings are necessary or ethical. “I think the pressing issues we face today are more important than the well-being of people in the distant future, but the future is also important,” he says. “It’s not an either-or. I think protecting one helps the other.”

Lomberg spoke of creating messages 10,000 years in the future as analogous to trying to contact aliens, as we did on Voyager’s Golden Record. “We want to tell aliens the best about ourselves, but we need to tell our descendants something about what was worst about ourselves,” says Lomberg.

Perhaps one of the most fascinating parts of the documentary is an interview with Fumihiko Imamura, the director of the International Research Institute of Disaster Science. The filmmakers drive around Sanriku, Japan to see ancient markers left by past residents for future generations, warning them of devastating tsunamis. A stone reads: “High dwellings ensure the happiness of our descendants. A terrible tsunami reached this place. Never build your house lower than this.” Clearly, warning future generations of unseen dangers is nothing new. While a tsunami of the magnitude the marker warned might not come every generation or even every other generation, those who lived through that particular disaster wanted to make sure the third or fourth generation didn’t experience the horrors they did. .

Alison McFarlane, former chairman of the US Nuclear Regulatory Commission, is one of the strongest voices in the documentary. She clearly explains the complex political and scientific problems we face when dealing with radioactive waste, especially the problems associated with finding a place to store it. “Shoot it in the sun” is apparently not a good option because of our imperfect track record of successfully launching rockets into space, and international waters are not viable because international consensus would be required.

containment also recognizes an often overlooked aspect of nuclear energy and waste storage: equity. Reverend Willie Tomlin, a community organizer and pastor in Waynesboro, Georgia (near the Savannah River Site), tells viewers, “It seems to me that most reactors are built in poor communities or in communities that are not densely populated. In Burke County, there are 22,000 people in the entire county. Even if we could convince everyone, that’s not enough people to worry about. OK? You can get around 22,000… They’re stuck with a problem that’s getting bigger and bigger. That is really going to be passed on to my grandchildren and my great-grandchildren.”

McFarlane’s interview puts that sentiment in a broader context: “When we made nuclear weapons, it wasn’t a social decision. A few people decided. It wasn’t all of society saying ‘yes, let’s build at least 40,000 nuclear weapons’… and when it comes to building nuclear power plants, you know, we didn’t get a say in the beginning either.”

Ultimately, however, the pragmatic approach to nuclear waste that McFarlane took towards the end of containment is the one we have to agree with. “There’s no way to make sure you’re going to keep this stuff isolated from people in the environment forever…But we always have to keep in mind that the problem is, do we leave this stuff where it is? Or stop we put it underground?” , someone will maintain it.’ Well, will they? You assume that the institutions that guarantee your safety today will still be there hundreds of years from now, and I have no faith in that.”