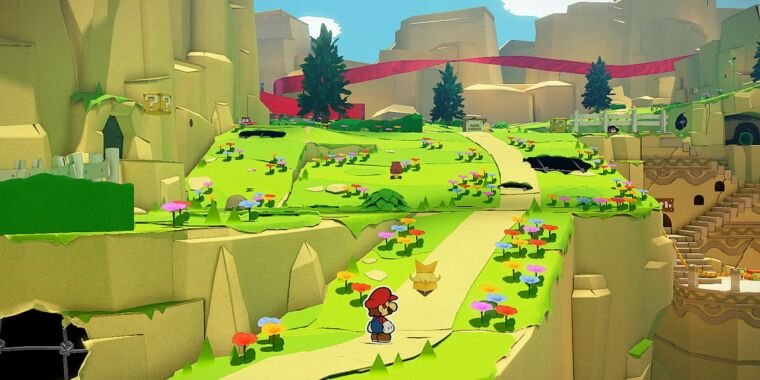 Of all the spin-offs that Mario has starred in over the years, the Paper Mario games (and the related) Mario & Luigi series) most skillfully expanded the character beyond his basic platforming roots. The familiar characters, locations and items are still there Paper Mario titles, but they’re complemented by completely new settings and situations that often wouldn’t look out of place in a traditional Japanese RPG. And even the well-known Mario characters are given new life in these games, revealing rich inner lives and characterizations that the simple save-the-princess plots can’t match.

Paper Mario: The Origami King continues this tradition, telling a cheesy, yet captivating, family-friendly story with gusto and charm. But it messes with the series’ usual RPG trappings so much that it still finds its way even as the final credits roll. As a complete package, Origami King often feels like a hodgepodge of original ideas – some good, some mediocre – that never quite come together as more than the sum of their parts.

As often happens in Mario’s RPG titles, King Bowser has been pushed aside (and folded) in favor of a more interesting antagonist for Origami King† This time, that antagonist is Olly, a floating, folded creature imbued with the usual ill-defined, plot-moving magical powers. Olly exudes some not-so-subtle racist supremacist vibes by loudly announcing his desire to kill the flat paper denizens of Paper Mario‘s kingdom in thicker, folded origami versions of itself. And if those folded versions become zombie-esque automatons beholden to Olly’s will, so much the better for his new world order.

Olly begins by transforming Princess Peach into an extremely obnoxious origami-esque version of herself, outdoing herself by wrapping her castle in a series of colorful garlands and lifting it to the top of a volcano. He’s also about turning many of Bowser’s henchmen into zombie origami folded soldiers, leaving the remaining plain paper versions of Bowser’s henchmen happy to help Mario in an enemy-of-my-enemy kind of alliance. With the help of Olivia, Olly’s non-monomanic origami sister, the crew must trace all those streamers to their source and turn them into confetti to free Peach and the Kingdom.

It’s not exactly Shakespeare, but the family-friendly, magic-infused plotting buzzes along with the requisite number of twists and red herring. The quest takes you through the usual environments (desert, ice, water, forest), each filled to the brim with highly animated and talkative characters – although their motivations are often as flimsy as their looks. What seems like a simple task in any field inevitably expands into a telescoping array of required submissions; each creates a barrier to the ultimate goal of breaking the streamer, and each is even more ridiculous than the last.

The writing is pretty sharp, mixing a light character growth with a healthy buildup of hijinks (and some truly laughable adult meta moments). The game even squeezes in a lot of the light-hearted character moments that focus on the power of personal sacrifice. (Saying more would spoil too much). What Origami King lack of depth and complexity, makes up for with merry follies.

Even for a series that has always been content to ignore many RPG gameplay tropes, Origami King is not a traditional RPG. This is evident in the game’s combat system, which is more about spatial relationship puzzles than the usual turn-based affair.

Origami KingBattles all take place on a segmented circle, cut into radial and lateral slices like a Star Wars chessboard. Mario faces the vast majority of these battles on the hub in the middle, while enemies arrange themselves around the “squares” on the round board.

Before each turn, Mario has the option to move those enemies, either by rotating one of the circular sections of the board around the central axis or by sliding a slice sideways. The purpose of these moves is to line up enemies, either in nice straight lines (for successive jumps) or 2×2 blocks (for easy hitting with a hammer). If you can get everything neat and tidy, you’ll get a 50 percent attack damage multiplier, which is often the difference between a simple one-turn battle and a lengthy back-and-forth battle.

Even spatially challenged players could probably work their way through most of these arrangements eventually. But Origami King adds extra challenge by entering a short time limit and a finite number of moves for each puzzle. This turns what in itself could have been a relaxing and intriguing puzzle game into a stressful, heart-pounding battle to decipher visual chaos under strict conditions.

The game throws players a few bones: it gives you the option to spend earned coins on extra time and/or a free reshuffle move (and Origami King always throws you a lot of extra coins to make these hints accessible). But it’s hard not to feel like a failure leaning on these crutches. And while the enemy-shifting puzzles start off easy, towards the end I spent several minutes at a time staring at cluttered boards before giving up and going for the hint.

After a while, instead of trying to kill every last enemy, I found myself relatively eager to avoid as many of these battles as possible. That’s partly because the rotation puzzles started to get tedious. But it’s also because the game doesn’t really offer enough rewards to make the hassle worth it.

Origami KingBoss battles create confusion by placing a powerful enemy in the center of the rotating board and Mario on the outer ring. Here Mario has to place arrows and power-boosting attack icons on the board to position himself perfectly to deal damage to the boss.

These battles are by far the most engaging and clever in the game, each with its own twist that requires new tactics to get through the boss’s unique and evolving defenses. I wouldn’t have minded if the traditional fights were more like these varied and improv-filled boss fights.

Unlike most RPGs, battles here don’t give you extra experience to level up your characters with more powers and new abilities. Instead, battles only reward you with the same coins that you can find in large quantities, just by looking for hidden and not-so-hidden items on the map. If you can get literally thousands of coins from a single question mark block, going for another few hundred for another puzzle fight can be a waste.

The closest Origami King has a leveling system is a set of origami hearts, which increase the health and strength of Mario when combined at preset points. You can also convert your less hard-earned coins into more powerful boots and hammers, all of which eventually break and need to be replaced after too much use. By the end of the game, however, I was absolutely overloaded with more ultra-powered weapons than I knew what to do with them, making the whole pseudo-leveling system seem nonsensical.