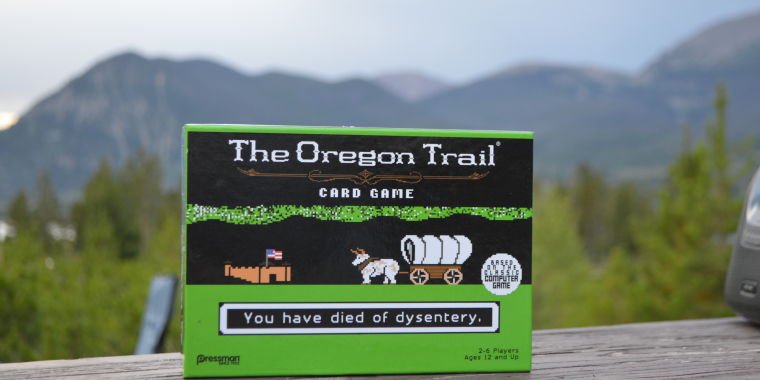 Welcome to Ars Cardboard, our weekend overview of table games! Check out our full board game coverage at Cardboard.arstechnica.com and let us know what you think.

Everyone of a certain age has their own experience of playing The Oregon Route on a computer as a child.

Some of us started with the Apple II Oregon trailwhile some of us played later Oregon trail versions. But we all learned what it meant to “cross a river” and “caulk a wagon.” Some of us played the Oregon Trail Deluxe version on Windows and reenacted the scenes of our wagon train passing through what is now Kansas, Nebraska, Wyoming, Utah, and, if you were lucky, more western states. Some of us started out as bankers and went crazy buying laudanum at the General Store. Some accepted the challenge and started as teachers. Some of us avoided playing when things got dire and spent our time throwing away supplies to make room for everything we brought back from the hunt.

The Oregon Trail card game doesn’t really facilitate the kind of freewheeling play that the digital Oregon trail versions offered. That’s fine for a card game, though: unless your parents forced you to share every moment at the computer with your little sister (thanks, mom and dad), the original games were solitary endeavors. A card game should involve everyone at the table, and The Oregon Trail card game is better with four or more people. (Even though the box says you can play with two, that quickly got boring when I tried it.)

The purpose of The Oregon Trail card game is to have at least one person at the table survive through 50 trail cards, after which your wagon train arrives in Willamette, Oregon. If one person makes it, everyone at the table wins. It’s a nice change from fiercely competitive games where alliances are formed and relationships are ruined for the night.

The gameplay is relatively simple: at the start everyone is dealt Trail Cards and Supply Cards, and you go around the table laying down Trail Cards that match the Trail Card you played before your turn. Trail Cards instruct you on the next moves. Sometimes your best Trail Card tells you to choose a Calamity Card, and – you guessed it – that brings disaster to the wagon party. Sometimes the calamity can be solved simply by playing a supply card; sometimes the disaster is instant death. Perhaps this is why the game’s publisher says you only need 30 minutes to play. (To be fair, some of us modern folks would only last 30 minutes on the real Oregon Trail.)

As an exercise in nostalgia, The Oregon Trail card game is okay. But as a game there are problems. The big problem is that some cards intended to advance play have ambiguous instructions, and I couldn’t find any clarifying instructions in the rules booklet.

For example, one kind of Trail Card says: “Throw an even number to ford the river. Roll an odd number and lose one supply card. Pretty simple! But then another type of Trail Card says, “Throw an even number and ford the river. Throw a one and die by drowning.” So what if I roll a three or a five? To me, the most logical interpretation is that you lose a stock card, but if you’re low on stock cards and you’re only five track cards away from Willamette, desperate for a reason not to lose that stock card, that kind of ambiguity will be exploited.

There are only two Inadequate Grass cards in 32 Calamity cards, and not every turn requires the table to draw a Calamity card. So while my instinct is to “leave the Insufficient Grass card on the table for a few rounds of play, and if such a card is drawn a second time, someone must give up an Ox card, otherwise no action will be taken”, no other This is how long the Calamity Card is kept on the table. I can also see how the game can instruct your chariot party to sacrifice an ox card before the next round of play begins.

Another concern: you hardly ever draw good cards The Oregon Route. With two Food cards in the Calamity card game, you can exchange a “bullet” supply card for a “food” supply card. With two city cards and two fortress cards (from a stack of 58 rail cards), you may draw one or two additional supply cards or discard a calamity card. That is it. I know the real Oregon Trail was brutal, but even in the computer game you could hunt, or loot an abandoned wagon, or come to a cool landmark like Chimney Rock and rest.

There is no way to measure morale in this game. Maybe that’s because “morale is low” is the only outcome.

Still, the cooperation with my fellow players is refreshing despite all those small frustrations. Supply cards are never jealously guarded, and in some rounds, players can simply place them face up on the table to save time. If one person draws a typhoid disaster card, the next two players will likely use their turn to play their water and medicine supply cards. Although the instructions tell you that “there may be many times when the a better strategy to let a player die’ than to spend your stock cards, in the few games I played with my group I’ve never come across a case where letting a player seem like the better strategy.

Gameplay is fast – downtime for idle players is short, especially with four players, which seems to be the ideal group. When I tried to play with just one other person, my premature death meant I had to watch my husband draw cards for another five minutes until he died. With four players, we were able to keep three of us alive for a solid 20 minutes (our first death in that game occurred when a player rolled a on that infamous “Throw an even number and ford the river…” Map) .

Oregon trail moves fast enough that we didn’t get bored at the end. But to go to Oregon is really hard. We never did.