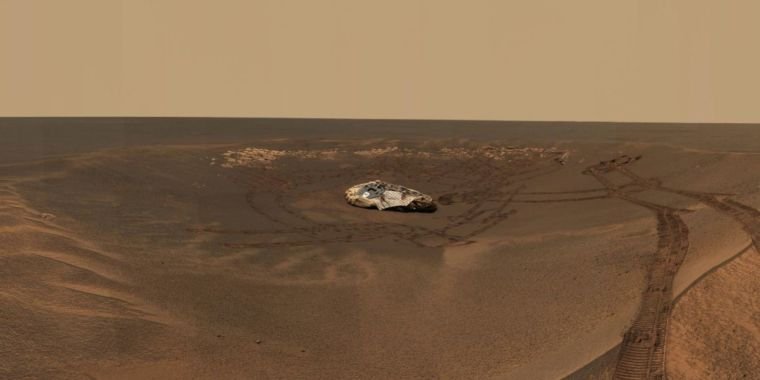 Late Tuesday night, scientists at NASA’s Jet Propulsion Laboratory sent their latest data uplink to the Opportunity rover on Mars. Over this connection, through the Deep Space Network, American jazz singer Billie Holiday sang “I’ll Be Seeing You,” a song that ends with the lines:

The scientists waited for a response from their long-silent rover, which was engulfed in a global dust storm last June, likely covering its solar panels in a deadly layer of dust. Since then, the team of scientists and engineers has sent more than 835 commands, in the hopes that the rover will wake up from its long slumber — that winds on Mars may have blown away some of the dust that covered the panels.

So Tuesday night they listened. They reminisced. But in the end there was no response. Opportunity would eventually be pronounced dead on Sol 5352, as in five thousand, three hundred and fifty-two days on Mars. NASA is expected to make it official at 2 p.m. ET on Wednesday, when NASA administrator Jim Bridenstine and the agency’s chief of science, Thomas Zurbuchen, convene a press conference.

Opportunity landed on Mars more than 15 years ago, on January 25, 2004. So much time has passed since then. Facebook would not be founded until a month later. YouTube wouldn’t get its first video upload for over a year. George W. Bush was still in his first presidential term. NASA’s Cassini spacecraft hadn’t even arrived in the Saturn system yet.

And yet Opportunity and its sister rover Spirit began plugging along the surface of Mars from then on. Originally designed for a 90-day lifespan, the rovers persisted. Spirit lasted until 2010, when the batteries were unable to keep the spacecraft’s critical components from freezing.

But Opportunity held out amid the rugged terrain. It roamed a whopping 45.16 kilometers over the Red Planet, a distance unmatched by any rover on the Moon or Mars. In 2016, when it climbed a hill, Opportunity’s slope reached 32 degrees, the steepest ever for a rover on Mars.

The rover’s primary task on Mars was to better understand the geology of the planet and the history of the water there. It worked. For example, in one discovery, it found evidence of ancient hydrothermal vents that would have existed beneath a warm, shallow lake.

When the dust storm engulfed Opportunity last year, mission scientists had hopes they could still find the rover. Of course he had to steer with only two wheels instead of four, and the rover showed his age. But even then, the batteries had retained 85 percent of their original capacity. Now, though, NASA scientists know it will never make it out of Perseverance Valley, a feature carved into the rim of Endeavor Crater by running water in a distant time.

Spirit and Opportunity will not soon be forgotten. Their success led NASA to develop larger rovers, including Curiosity and the upcoming Mars 2020 rovers. Carrying significantly more scientific equipment, those two rovers will probe deeper into Mars’ watery past and whether it ever made life possible.

Above all, maybe, Spirit and Opportunity will be celebrated for their tenacious survival in harsh conditions. One day—not in the movies but in real life—people will hopefully visit the locations of these two robbers to marvel at their raw technology, dusty graves, and historical feats. This would be mankind’s best tribute to these two early Mars pioneers – that they were not the end of human exploration of Mars, but the beginning.