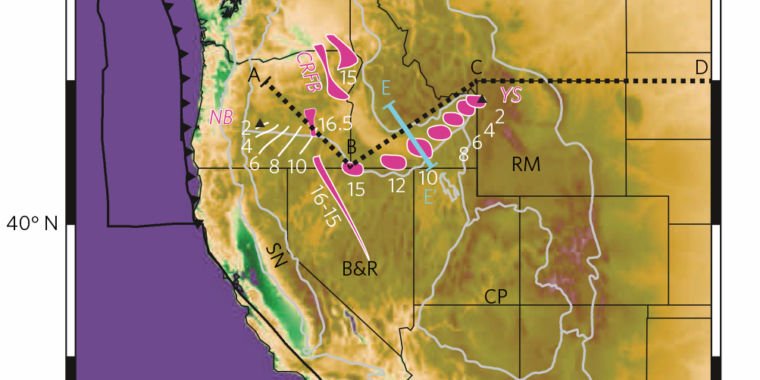 The weird thing about volcanic activity in the western United States is that it’s actually pretty hard to explain. The Pacific Northwest’s Cascade Volcanoes are one thing—standard tectonic plate boundary volcanoes like the rest of the Pacific Ring of Fire—but they’re far from alone.

There’s Yellowstone, of course, which has a history of terrifyingly large eruptions that stretch across Idaho and into Wyoming. And near the Cascades, much of Washington and Oregon is covered by massive lava flows that erupted about 15 million years ago, while southeastern Oregon is home to the Newberry Caldera and a series of related volcanoes. Nevada, meanwhile, is dotted with a series of smaller eruptions. (And we’re omitting the Sierra Nevada and Southwest mountains altogether.)

There is much talk of a plume of hot mantle rock rising beneath Yellowstone, explaining volcanic chains such as the Hawaiian Islands. (The mantle plume stays in one place as the tectonic plate slides overhead.) But there’s real disagreement about Yellowstone. Ultimately, this is because the last 50 million years have been geologically wild in this region, from the building of the Rocky Mountains to the stretching of Nevada like a breathing accordion and the creation of the San Andreas Fault. It’s complicated.

A new study from a team at the University of Illinois led by Quan Zhou goes a step further in explaining things. The researchers are essentially creating a computer simulation of the action below the surface by working backwards. Given the CT scan-like images we have today of the tectonic plates and mantle beneath them and the records of tectonic plate movement over the past 20 million years, the model recreates the steps that would result in the correct current state.

The results suggest that a rising chimney of deep mantle rock has little to do with this story. Instead, it relates to the movement of tectonic plates at the top and some shallow areas of hot mantle that were taken for a ride.

Today, an oceanic plate subducts beneath the Pacific Northwest, but 30 million years ago that subduction zone stretched all the way down the west coast. When subduction in Southern California nibbled the oceanic plate all the way back to its source at a seafloor-spreading boundary (where new oceanic crust slides apart like double conveyor belts), there was nothing left to subduct, and the San Andreas Fault became the new king from the coast.

Beneath North America, that vanished portion of the oceanic plate still hung obliquely in the mantle. Mantle is solid rock (not liquid magma) but it is hot enough to flow very slowly like putty. And as this doomed plate sank to the east, mantle rock from beneath the Pacific was pulled behind it. It’s a bit like dragging a spoon through a jar of honey and watching honey get dragged along in its wake.

The mantle rock from under the Pacific Ocean just happened to contain some anomalously hot areas — probably related to some past shenanigans under the start of the assembly line. And as the submerged slab drifted away, the hot mantle rock settled beneath western North America.

Now, the subducting oceanic plate that passed under the Pacific Northwest was still there, but about 17 million years ago, a hole opened up in that plate under eastern Oregon. And in the model, this gives the hot mantle rock a path up to hit the continent. This is when the Columbia River Flood Basalt eruptions paved Oregon and Washington.

And then it gets weird

So far, so good, but the really strange thing about the eruptions that followed is that they evolved in three different directions. Yellowstone eruptions stretched northeast over time, while the smaller Newberry eruptions marched west. And the scattered Nevada eruptions instead followed a southeasterly line.

Here’s what happens in the researchers’ model: The hot mantle rock essentially continues its eastward movement, but runs into the thick continental crust of the Colorado Plateau and splits to the north and south.

To explain the westward movement of Oregon’s Newberry eruptions, we need to return to spoons and honey. If you start the spoon at the edge of the jar and move it toward the center, you won’t create a “hole” in the honey – honey will be sucked around the spoon to fill the void. Similarly, the motion of a subducting plate sliding down from the surface causes a shallow mantle rock to be sucked back into the narrow wedge where the oceanic and continental plates meet.

In this case, that included some of the intruding hot mantle rock, which was sucked west to fuel those Newberry eruptions.

Essentially, the model shows how hot rock from under the Pacific is pulled under North America and split in three directions. That would mean that three puzzlingly divergent areas of volcanic eruptions actually originated from the same source. The researchers can’t rule out a contribution from a deep mantle plume, but their model doesn’t really need that to explain things.

Instead, the oceanic plate that ate California goes down — Terminator-style (spoiler) — and lava eventually bubbles up into a broad swathe of the American west.