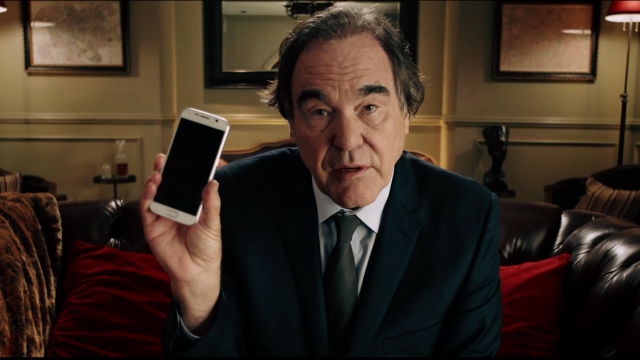 We’re all used to pre-movie warnings and promos, from candy-filled “let’s all go to the lobby” sequences to a polite but firm reminder to turn off phones. Sometimes those sequences get a nice touch up (my favorite is probably this wild vulgar parody of the Aqua Teen Hunger Force movie), but starting this week, moviegoers can expect something darker, like a poignant warning that sounds like it was written by Edward Snowden.

However, it wasn’t. Instead, the message was written and delivered by Snowden film director and screenwriter Oliver Stone.

The Oscar winner appears in the one-minute clip, sitting in a lovely study — complete with decadent furnishings and giant bottles of supposedly fine liquors — holding a smartphone. He starts by describing the many things “this awesome little device” can do, from mass communication to streaming cat videos (and we get to see a few cats briefly to make it clear).

“That’s not all it does,” says Stone as the background music darkens and the camera begins to quickly jump between corners. “It allows certain parties to track your every move every time you call or send a text message. We care them access. The information you voluntarily put out into the world is enough to burn your life to the ground. This will be our downfall.”

Having given credence to anyone who might question his “dramatic” statement, Stone returns the statement to moviegoers who will see his warning in theaters this week: “Do the rest of the audience a huge favor: put your phone off during the movie.” After that, a narrator insists that moviegoers are “welcome to turn your phone back on after the movie,” then reminds us that we can expect the film to hit US theaters on September 16.

Snowden’s promotional statement was sent to Ars by a representative of public relations company Submersive Media, acting on behalf of the film production company Open Road Films, who even said: “Oliver Stone would like you to turn off your cell phone during the movie and then turn it off forever afterwards. would fit very well into his perspective.

As Stone told convention attendees in San Diego last month: “No one in the history of the world has ever seen anything quite like Google. It’s the biggest, new fastest growing company ever, and they’ve invested huge amounts of money into what surveillance is, which is data mining. They’re data-mining every person in this room for information about what you buy, what you like, and most importantly, your behavior.”