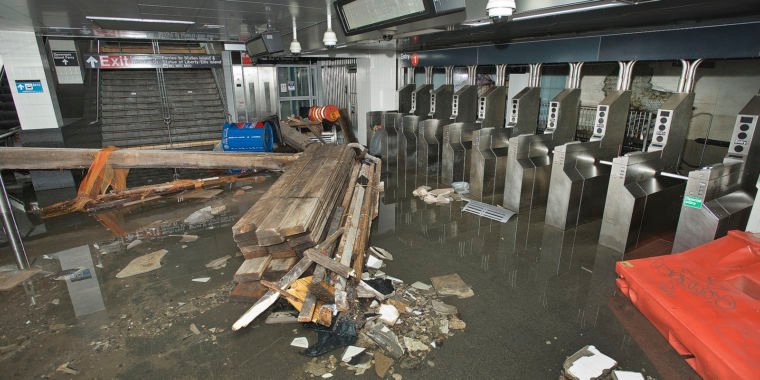 Today, the city of New York has joined a number of California cities to sue a group of major oil companies over the costs of climate change. The lawsuit alleges that these companies — by ignoring their own scientific experts and promoting the continued expansion of fossil fuel use — have caused public and private nuisance in addition to trespassing on city properties. Not only does it demand damages for damage the city has suffered in the past, but wants the oil companies to pay the cost of any adjustment programs it has had to initiate or plan.

When making the announcement, city officials announced they are putting their money where their lawsuit is. Over the next five years, New York City will divest its pension funds, which currently hold just under $200 billion dollars, from fossil fuel companies.

New York City is not the first to sue the oil companies. A number of California cities and counties, including San Francisco and Oakland, did so last year. Those suits targeted the same five companies named in the company announced today: Chevron, ConocoPhillips, ExxonMobil, BP and Royal Dutch Shell. These are the top five companies, and the suit estimates that together they are responsible for more than 10 percent of the total greenhouse gases that have accumulated in the atmosphere since the industrial revolution.

But they were clearly not the only companies responsible for climate change. And to a large extent, they simply supplied the fuels that were then burned by other parties. So why should these five companies be held liable? The New York suit addresses this problem in a number of ways. Echoing a number of tobacco-related lawsuits, the city states, “This lawsuit is based on the fundamental principle that a company that makes a product that causes serious harm when used exactly as intended must bear the costs of reducing that harm. “

In addition, the suit makes extensive use of a variety of documents that have come to light in recent years. Taken together, these show that the companies were well aware of the risks of damage from climate change and yet continued to publicly question the science.

“Disregarding the findings of their own in-house scientists and scientific advisors, defendants have re-engaged with the exploration, production, marketing and sale of fossil fuels over the following decades,” the lawsuit claims. “The vast majority of the fossil fuel emissions produced and marketed by Defendants occurred after Defendants became aware of the impacts of climate change.”

To back this up, the lawsuit cites now extensive documentation that several companies, most notably Exxon, were aware of the growing scientific consensus about carbon dioxide’s role in climate and even sponsored their own research that came to the same conclusions. The lawsuit notes that all five defendants were members of the American Petroleum Institute, thus receiving copies of an expert report warning of “GLOBAL CATASTROPHIC EFFECTS” this century and that “THERE IS NO SPACE in time to act.” The science was so widely accepted within the companies, the suit says, that they began designing and adapting their infrastructure to protect against the effects of climate change, such as sea level rise.

Despite their internal actions, the suit notes that the companies were simultaneously engaged in a PR campaign that downplayed our faith in climate science. They contributed funding to a group called the Global Climate Coalition, which told the press that all carbon emissions would be great for plant life, even if internal documents admitted it “couldn’t provide convincing arguments against the conventional model of greenhouse gas emissions.” caused climate change.”

As late as 2000, Exxon ran ads titled “Unsettled Science” while funding scientists who question mainstream science. Still skeptical about scientists in 2015, Rex Tillerson, then-CEO and current Secretary of State, asked, “What if, [after] everything we do, it turned out that our models were really worthless, and we achieved all our goals, and it turned out that the planet was behaving differently because the models just weren’t good enough to predict it?”

So the legal theory seems to be that the companies were internally convinced of the harm, but misled the public about it to continue with the normal course of business. That, New York says, is causing direct damage to city property: “Global warming is already causing the city to experience more hot days, flooding of low-lying areas, increasing shoreline erosion and greater threats of catastrophic storm surge flooding even more severe than the floods from Hurricane Sandy.”

Some interesting details are included in these arguments. For example, the city already supports programs to help its residents during heatwaves, which kill more New Yorkers than all other natural disasters combined – they are expected to get worse as a result of climate change. Extreme precipitation events have increased 70 percent in the Northeast over the past 50 years, forcing the city to protect infrastructure like the subway from streets that just can’t drain fast enough. And the sea level we’re expected to reach later this century would mean a 100-year flood would flood 97 percent of NYC’s power generation capacity and 20 percent of hospital beds. Parks, homes and other infrastructure are also at risk.

The city has already paid for some of these problems after Hurricane Sandy and other less noticeable floods, and is currently spending money to protect its infrastructure from similar events. There are additional programs that city officials also think are good ideas, but there is simply no money to pursue them.

All of these issues together make up the three issues highlighted by the suit. It alleges that the oil companies have caused public nuisance to the city: “Defendants’ conduct constitutes a substantial and unreasonable interference and interference with public rights and property, including the public rights to health, safety and welfare of a significant number of people living in and visit New York City.” The charge of private nuisance arises because the city owns some properties that are and will be damaged or need to be paved to adapt to the future climate.

Finally, the allegation of violation is based on the idea that the companies are altering city properties without permission. Their conduct, the indictment alleges, “was almost certain to lead to the invasion of city property, without permission or right of access, through increased heat, sea level rise, flooding from storm surges, and flooding from increased intensity and frequency of precipitation. .”

What does the city want? It wants the costs it has already spent to protect its infrastructure, properties and residents. It also wants the oil companies to fund any programs needed to protect the city from the further changes that climate change will bring. It wants the legal costs to be covered by the oil companies. And if the companies fail to pay, the city would like the court to order them to stop all activities contributing to the alleged damage.

In many ways, the suit is similar to some of those in California, which are also seeking the current cost of building infrastructure that will protect against the near-inevitable future course of climate change. So far, none of the efforts have been tested in court. But simply by being filed, they pose a risk to the oil companies. The lawsuits themselves are largely based on internal documents that have been leaked over the years. The discovery process could potentially lead to a much larger collection of internal communications, which could convince some other communities that it’s possible to build a case.

All the communities that have traded so far are on the coast and thus have clear problems due to climate-driven sea level rise. But it’s clear that climate-related issues across the country come at a cost as communities deal with impacts such as melting permafrost, an extended wildfire season and more. If one of the first lawsuits gains legal traction, the oil companies could face an endless sea of ​​lawsuits.

In contrast, New York City’s decision to divest is a much smaller threat. Fossil fuel divestments will have to become much more widespread before oil company stocks are at risk of sudden price swings.