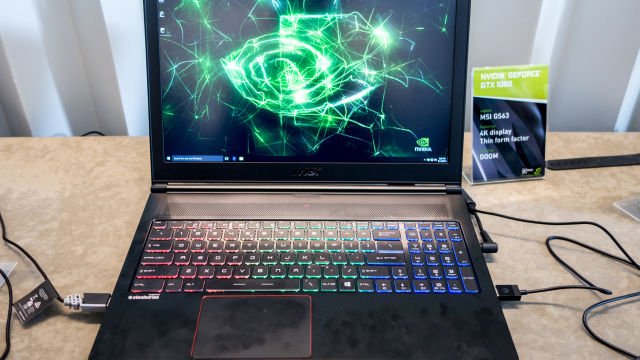 A little less than a year after Nvidia brought the full desktop version of the GTX 980 to laptops, it’s starting to phase out laptop chips altogether. As of today, the desktop versions of the GTX 1080, GTX 1070 and GTX 1060 – with some very minor tweaks – are in laptops from the likes of MSI, Asus, Alienware, Lenovo and Razer, to name a few. They are even overclockable. Yes, if you want the very best graphics card outside of a Titan X in something you can take to LAN parties, Nvidia has you covered.

Well, I say take it with you, but like laptops equipped with a desktop GTX 980, those with a GTX 1080 inside aren’t exactly thin and light ultrabooks. Indeed, most laptop manufacturers reuse the same chassis as for the GTX 980, resulting in systems that are insanely thick, heavy, and about as portable as carrying a bag of bricks. Oh, and don’t forget the power adapter, which – as I saw on some models in demos – is literally the size of a brick. But hey, if someone tries to rob you for your expensive laptop, at least you’ll have something to hit the attacker with.

Still, cramming a desktop GTX 1080 into a laptop is an impressive engineering feat. Based on the same 16nm Pascal architecture GP104 chip as its desktop counterpart, the mobile GTX 1080 features the same 2560 CUDA cores, the same 256-bit memory interface, and the same 8GB of GDDR5X memory running at 10GHz for 320GB/s on bandwidth. It is available in both the MXM form factor and integrated solutions. The GTX 1080 supports everything the other Pascal cards also support, including recent inventions like Simultaneous Multi-Projection and Ansel (which you can read more about in our GTX 1080 review), as well as old standbys like G-Sync and GameStream.

The concession to mobility comes in the form of a drop in the base clock, which runs at 1556MHz versus the desktop chip’s 1607MHz, though the boost clock runs at the same 1733MHz. How well the GTX 1080 maintains that speed within the confines of a laptop will depend largely on the design chops of laptop manufacturers, and Nvidia notes that performance is “within 10 percent of their desktop GPU equivalents,” meaning there may be a a few minor hits to the frame rate here and there.

The GTX 1070 takes a much bigger hit to the base clock and boost clock – 1442MHz and 1645MHz respectively – but this is largely offset by the increase to 2048 CUDA cores in the 1920s in the desktop section. The 8 GB of GDDR5 at 8 GHz remains the same. While I haven’t had a chance to run any serious benchmarks yet, a quick test of Rise of the Tomb Raider running on a chunky MSI GT62 equipped with a GTX 1070 was impressive. The laptop had an average frame rate of 103FPS at 1080p at maximum settings and DX12.

While cramming cards with the performance of the GTX 1080 and GTX 1070 into laptops is an impressive feat – both cards are faster than the old Titan X, significantly so in the case of the GTX 1080 – it’s the GTX 1060 that gets a lot more attractive with laptops. The base clock speed has been dropped from 1506MHz to 1404MHz without any adjustment to CUDA cores, but the smaller, more efficient nature of the GP106 used in the GTX 1060 means it can be crammed into laptops that someone might want to use.

The best example is the new Razer Blade, which drops the GTX 970M in favor of the GTX 1060 and combines it with the same excellent 14-inch 3200×1800 IGZO display and relatively slim 17.9mm aluminum body. Similarly, MSI’s new GS63 Stealth Pro with GTX 1060 has a chassis that is just 17.7mm thick and weighs 1.9kg. It has a 15-inch 4K display, and the sleek black chassis would look relatively mature if it weren’t for the incredibly blingtastic RGB backlit keyboard. Considering that the GTX 1060 can happily push over 60 FPS at 1080p at maximum settings in almost any game, it’s hugely impressive that it’s in a laptop you can easily carry in a backpack and use every day.

Unfortunately for Razer, putting GTX 1060 in laptops makes external GPU solutions like the Razer Core even more of a niche proposition than before. Perhaps paired with the thinnest laptops, where not even the GTX 1060 can go, the Core will still have a place, but it’s hard to see a future for such devices when the line between desktop and laptop parts has been removed .

The trade-off for all that performance is noise and battery life. While much larger and thicker laptops like Clevo’s P870DM or Asus’ ugly G752VY laptop remained surprisingly cool and quiet under load in demos, both the Razer Blade and MSI GS63 were loud and hot. Battery life in the bigger laptops would always be terrible, but it’ll be interesting to see what impact the GTX 1060 has on smaller laptops, especially as it replaces the GTX 960M (the GTX 970M and 980M are also being discontinued). Nvidia has not revealed the TDP of the new laptop GPUs, but notes that the GTX 1080 has a similar TDP to the GTX 980 (160W), the GTX 1070 to the GTX 980M (125W), and GTX 1060 to GTX 970M (about 100W).

Nvidia claims that Pascal’s efficiency improvements, particularly idle power consumption, help increase laptop battery life by up to 30 percent. BatteryBoost technology also makes a return, performing clever tricks like limiting the frame rate or automatically dropping game settings while running on battery to conserve power. New is BatteryBoost’s ability to improve frame variance, reduce stuttering, and make more efficient use of GPU cycles. That said, performance on battery will take a hit, and Nvidia notes that while its new mobile GPUs are all certified VR-ready, this only applies when running on mains power, so don’t get your hopes up for the ultimate VR experience. backpack PC just.

To go along with its new GPUs, Nvidia has been working with manufacturers to equip their laptops with more powerful displays. In addition to 1080p variable refresh rate G-Sync displays, some laptops will have 120 Hz 1080 G-Sync displays for ultra-smooth, high frame rate gaming. Others will have 1440p panels for the first time (one of which will also run at 120 Hz), which is a great match for the GTX 1070 and GTX 1080. There will also be 4K G-Sync displays and while playing games at native 4K at 60FPS is still a stretch for a GTX 1080, performance is leaps and bounds ahead of previous laptop chips.

I played a preview build of the upcoming one Weapons of war 4 on a laptop running at native 4K with all settings cranked and it looked incredible. Such feats would have been unthinkable even a few months ago, and while the frame rate hovered just below 30 FPS, making a few tweaks, including a nifty setting that dynamically lowered resolution during busy scenes to suit a specific purpose for the frame rate to be achieved, sure that the game is more than playable.

Incidentally, they were concerned about that Weapons of war 4 may have settings menus thanks to its UWP origins, don’t worry – there are a lot of tweaks you can make to the visuals.

If you absolutely want to push 4K without compromise, there’s another option. Like the GTX 980 before it, all of Nvidia’s new laptop chips can be overclocked, and Nvidia has packed in dual FET power and more efficient power controllers to make this happen. Obviously, given the thermal limitations of laptops, there’s a lot less overclocking headroom than a desktop, but Nvidia claims boosts of up to 300MHz are possible depending on the cooling solution. Indeed, Nvidia showed a live demo of an overclocked GTX 1080 in an MSI laptop running at over 2000 MHz during a session of Demise.

Voltage adjustments are still off the table (that would be madness!), and overclocking warranty coverage will vary depending on the manufacturer, but if there’s a performance boost to be had, it’s great to have access to it.

The first batch of laptops equipped with the GTX 1080, GTX 1070 and GTX 1060 will be available to order in the coming days, with more models coming in the coming weeks. Prices will vary wildly depending on the laptop, but Nvidia says GTX 1060 systems will be as low as $1300 (~£1,100). That’s not too bad a price, as even any laptop with a GTX 1060 is easily the first true no-compromise solution for gaming on the go.

Just one request to all the laptop makers out there: can we please get a 13-inch thin-and-light with a GTX 1060 in it? And if you can make it look like it’s for adults too, that would be great.