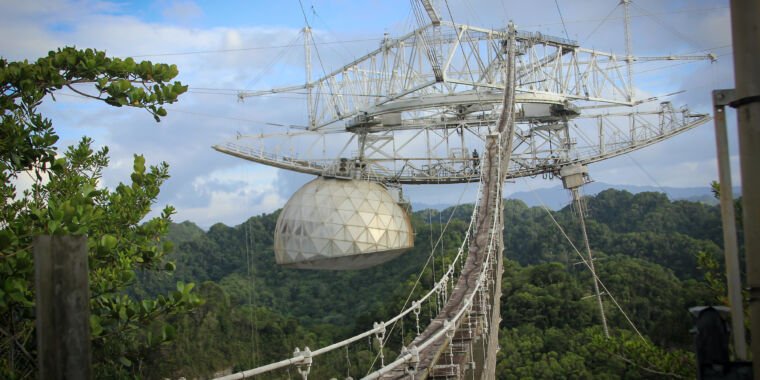 Today, the National Science Foundation released a video captured when the Arecibo Radio Observatory cables broke, causing the massive instrument platform to crash into the dish below. In describing the videos, the NSF also spoke about the monitoring program that had placed the cameras, ideas it had pursued to stabilize the structure before collapse, and prospects for building something new on the site.

A brief summary of the collapse: The Arecibo dish was designed to reflect incoming radio emissions from collectors hanging from a huge 900-ton instrument package suspended above it. The suspension system was supported by three reinforced concrete towers that held cables anchored further from the saucer, ran over the towers and then continued to the platform itself. The failure of these cables eventually caused the platform to fall into the saucer below.

Let’s go to the video

The video of that collapse comes from a monitoring system set up after the cable outages. Because of the danger of further cable breaks, the NSF had established no-go zones around each of the three towers supporting the cables. Because no personnel were allowed to get close enough to inspect the cables, personnel began monitoring them with daily drone flights, one of which was underway during the collapse. In addition, a video camera was placed on top of the visitor center, which provided an unobstructed view of the instrument platform and one of the support towers.

As you can see in the video, the drone surveyed the area where the cables ran over the support towers. In particular, it examined the tower that had supported the only main cable that had previously failed – note that one of the openings through which the cables pass is unoccupied. During filming, individual wires in the cable began to break and shortly after, the cable fell out completely. The remaining connection visible there, which was connected to the scientific instrumentation, survived a little longer before the dump platform pulled it apart.

In the second video segment, the view from the visitor center shows how the failure of the cables at that tower affected the rest of the system. When one of the three support anchors was gone, the instrument platform sank to the saucer between the other two. This created off-axis forces that caused the tops of those towers to be ripped apart from the rest, resulting in about 60 feet of reinforced concrete plunging to the ground below. At the same time, the backstay cables running from the tower to the ground came loose and swung wildly.

Despite all this devastation, the NSF’s decision to keep the areas around the towers clear of personnel ensured that no one was injured. And the visitor center, which is located near one of the towers, managed to escape without significant damage.

Ashley Zauderer, NSF program manager for Arecibo, described some of the ideas the NSF had considered when the cables started to break. These were mainly aimed at relieving some of the stress on the remaining supports. Ideas initially analyzed included reducing the tension of the backstay cables, which would allow the platform to droop slightly toward the saucer, decreasing the forces on the cables. Another idea she mentioned was to take some of the hardware off the platform to reduce weight. But that would require a helicopter and personnel to be placed on the platform, which was considered a risky activity.

While these plans were being evaluated, the telescope’s operators began monitoring the cables with a drone to avoid endangering people. Over the weekend, Zauderer said, the drone footage had revealed several separate wires in the cables, and she suggested this meant everyone knew a collapse was inevitable.

Even before that, though, there wasn’t much optimism about the ideas Zauderer mentioned. John Abruzzo, an engineer at the company hired to evaluate options for Arecibo, said “the chances of success were not that great.” In nearly all cases where operations and repairs of this sort had been attempted, Abruzzo said, the structure at risk was in relatively good condition, something that was not the case at Arecibo.

What are the future prospects for the site? Ralph Gaume, director of NSF’s Division of Astronomical Sciences, said this is not an easy question to answer. Although money had been allocated to stabilize and possibly repair the observatory — replacement cables had been ordered when the first broke — the NSF can’t just reallocate the money to something new without congressional approval. And those funds are way short of what’s needed to build something new on the site, meaning Congress should also be involved in determining what’s possible.