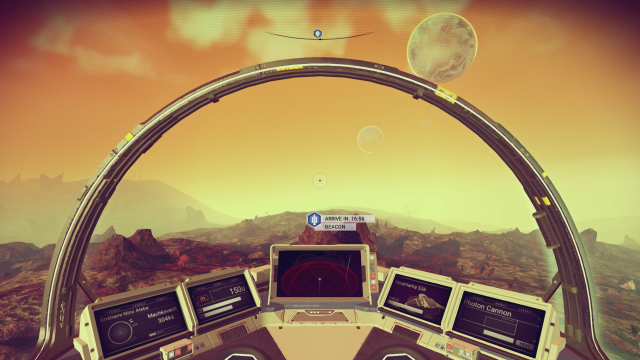 I’m sorry to say that my experience with Nobody’s Heaven closely matches the one Sam Machkovech told in our full review so far. The game’s procedurally generated galaxy is beautiful to experience, but exploring that galaxy eventually becomes a mind-numbing grind. Faced with the need to give players something to do in a vast, enchanting galaxy, developer Hello Games seems to have reverted to making very limited versions of the familiar types of gameplay often seen in much smaller, more handcrafted games.

So, Nobody’s Heaven features some perfunctory and unsatisfactory combat in space and on the ground. There’s a low-level survival mechanic without much difficulty or significant stakes. There’s a lot of mind-numbing resource collection and creation to make minor improvements to your gear. There’s an end goal to work towards through a series of repetitive hyperdrive jumps. There’s a lot of frustrating inventory management out there, made all the more frustrating because every second wasted juggling items in a menu is a second not spent looking at the interesting procedural landscape.

The problem with all of these systems is that they’re all quite contrary to the core appeal of simply exploring a functionally infinite, non-repeating galaxy of planets. The overall effect is to transform these amazing planets into pieces of rock to destroy, threats to survive, or collections of resources to trade, rather than mathematical works of art to be admired from within. The gameplay systems do encourage you to explore, but they in no way encourage you to do so enjoying or appreciate what you are researching.

It shouldn’t have been. There’s one gameplay system in particular that I think could be at the heart of an entirely different one Nobody’s Heaven; one that encourages the player to stop and really take an educated look at the amazing scenery that constantly surrounds them in the game.

in short, Nobody’s Heaven should be a game about photography.

I’m not usually the kind of player who likes to pretend to know what the developers should have done in hindsight. I’m also not the type to usually criticize a game for what it isn’t, rather than what it is (at least I’m not trying to be). As I discussed last week, one of Nobody’s HeavenIts biggest problem is that it can’t possibly live up to the game people have imagined it to be should been for years.

But the idea of ​​taking pictures as part of Nobody’s Heaven‘s main gameplay loop is so good that I’m unreasonably angry that it’s not already a major part of the game. I’ve felt this way since I saw someone casually float the idea on Twitter last week (I can’t find this tweet anymore, but here’s a thank you to whoever first posted this wonderful suggestion to my feedUpdate: I’m pretty sure this is the tweet in question).

To be clear, I’m not just talking about a “photo mode” that lets you remove the heads-up display and mission markers to share unobstructed images of various planets online. No, I mean, there should be a core gameplay loop that focuses on taking and sharing photos of your surroundings as a basic method of progressing through the game.

I imagine two intertwined systems. The first would be a bit like the underrated N64 classic pokemon snap (coming to the Wii U Virtual Console this week, FYI) or the heavily delayed PS3 title Africa if you prefer. In snap, players were both judged on their ability to find as many hidden Pokémon as possible in the game’s theme park-like setting and on their ability to properly frame and compose those shots. An in-game algorithm judged each shot based on the size and position of the Pokémon in the frame, the number of Pokémon in the shot, and the amount of interesting “action” that happens when the shutter goes off.

It’s easy to imagine a more elaborate rating algorithm Nobody’s Heaven photos rank shots based on positioning, angle, lighting, color composition, and even the overall uniqueness of the specific flora and fauna they contain (allowing more in-game currency for better shots). If you really want to get fancy, an online neural network could do the assessment instead, while struggling to generatively learn what makes a “good” photo.

The other photo system involves uploading your favorite photos to an online clearing house, where other players and even non-playing lookie-loos are encouraged to rank their favorites (with more votes translating into more in-game currency for each photo ). Photo-sharing systems integrated into the PS4 and Steam already allow players to do something like this, but integrating quasi-competitive photo-sharing and voting into the game would lead to an explosion of beautiful in-game graphics sweeping the internet. flood.

Not only would this be an excellent way to bring in another passive “multiplayer” connection Nobody’s Heaven‘s lonely universe, but it would also serve as an instant engine for generating viral attention. Players would be encouraged to spread their photos far and wide on social media in search of more votes (and likely more sales and new players in the process). Yes, there is the ability to troll unearned photos to the top of the photo boards and get votes, but careful moderation (possibly per-player voting limits) could limit this.

Players can use the in-game currency of good photos not only to explore the galaxy more efficiently, but also to purchase Instagram-style filters and photo adjustment stickers to help improve future photos. Heck, you could even buy toys like a drone helicopter for taking pictures or a telescopic lens to take otherwise impossible pictures.

If you build it, they will come

It may seem crass to use gameplay tricks to encourage what should be an innate desire to experience the wonder of Nobody’s Heaventhe algorithms. But the game already does that in its own clumsy way, asking players to identify each new plant and animal they see through their binoculars (and rewarding them with in-game currency and naming rights for their trouble).

However, that existing system asks players to simply look at each animal or plant once before moving on to search for another new piece of life to monetize (seeing an already discovered item is actually a bit annoying under this schedule). Plus, the only way to relive those discoveries is through a clunky menu system; you can’t view a local browse book of your favorites or see discoveries uploaded by friends and strangers.

But with the photo system, every unique new landscape and collection of plants and animals around the next corner becomes another chance to capture, remember and share something unique with the world. Encouraging in-game photos through gameplay systems could be just the push many players need to start looking at this boundless galaxy, not as something to survive and mine for profit, but something to enjoy. to enjoy and be absorbed by. It’s the kind of gameplay that builds on and amplifies what’s already making Nobody’s Heaven specially, rather than simply superimposing unrelated “gamey” content on top of a near-infinite universe.

I really hope a future update or player-made mod can add something like the photo system described here Nobody’s Heaven. After all, when a game’s core technology practically ensures that every planet you see will never be seen by another human being, the core point of the game should be to find and share the most interesting planets with your fellow humans.