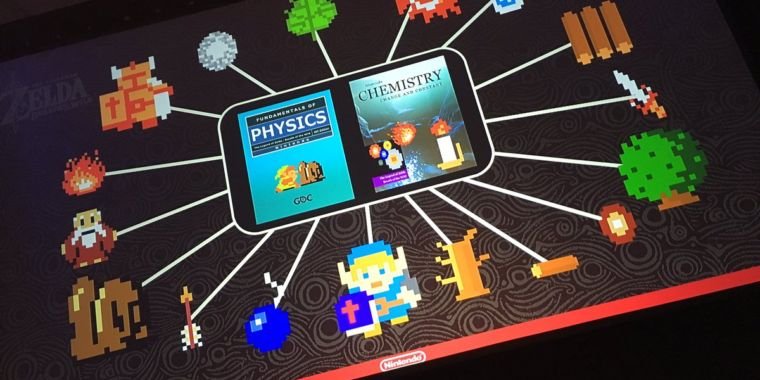 Original report, March 3 For the retail release in two days, Legend of Zelda: Breath of the Wild received the spotlight treatment in a Wednesday panel at the annual Game Developers Conference. While explaining the high-level concepts that fuel new ideas in the highly anticipated sequel, Nintendo developers also unveiled a unique prototyping system: a fully playable 8-bit Zelda game.

Three major developers of the game (Hidemaro Fujibayashi, Satoru Takizawa, Takuhiro Dohta) started the presentation with a seemingly alternate version of the original Legend of Zelda game and asked the crowd to “study” the image they believed would explain the different elements of the session, dubbed “Change and Constant: Breaking Conventions with Breath of the WildIt featured minor sprite tweaks to the original game, with a thinner, lighter-looking tree, a tree trunk on the bank of a river, and a distinct bottle-shaped icon.

The developers explained that the final game was built with a custom Havok physics engine that made room for “clever lies” in terms of how physics and chemistry were rendered. Before that full 3D system was built, however, a simple 2D engine was used to describe the types of freer experiences players can expect in Breath of the Wild. The result is the prototype, pictured above, which still allows players to push objects (for the physics-based puzzles) and combine and destroy other objects (for the chemistry-based puzzles). Developers showed this prototype in action and it looked slick. (It would certainly look great on the Nintendo Switch’s bright 6.2″ screen, but there was no confirmation that this prototype was specifically designed to run on Switch.)

However, after I used a lot of the new Zelda, we think it’s fair to say that some of the details revealed in the expanded panel border on spoiler territory. That makes sense at a developer event like GDC, where game makers want to break through the nuts and bolts of a game system to learn ideas for their own projects, but we won’t reveal those details here. Instead, we’ll use this space to argue with Nintendo. This 8-bit Zelda prototype sure looks like it super mario maker, complete with 3D shadows cast by the 2D sprite objects. What about release? Zelda Maker at a given moment?

Nintendo has not seized the panel to announce such a game. Maybe the company is just waiting for Breath of the Wild fever dies. At least that’s what we say to ourselves.

Update, March 10: GDC has now posted a video of his Breath of the Wild panel in its entirety, and we’ve inserted it below. Again, be warned: this contains some puzzle-solving spoilers, and a lot of botWThe pleasure comes from the refreshing sense of discovery and surprise. Still, the 8-bit Zelda demo is great to watch. Our tip: consider watching this video on mute to see that part!