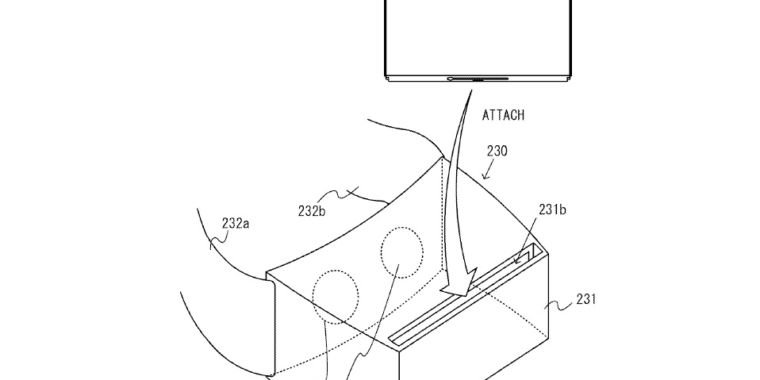 The diagram and description are taken from a large number of patent applications (as noted by NeoGAF) filed with the US Patent and Trademark Office on June 10 and published today. Unlike most patent filings, which can describe product ideas that will never be announced (much less released), these patents quite clearly describe the Nintendo Switch and its detachable JoyCon controllers with details consistent with what is known from the unveiling of the system in October.

That said, the unannounced head-mounted display, while patented, may never see the light of day as a real product. As it stands, the Switch’s tablet screen, which reportedly runs 6.2″ diagonally and has a 720p resolution, would be quite blocky compared to the screens on other virtual reality headsets. Even the first Oculus Development Kit had 800 lines of vertical resolution in 2013.

The patent application doesn’t go into much detail about the HMD accessory, but as described, it could use lenses to present a “widescreen”.[r] viewing angle than that of the tablet screen itself to “improve the sense of immersion for a user looking at the images”. The HMD described would also include an acceleration and angular velocity sensor to control a “virtual camera” that changes the “line of sight” for the user, just like other VR headsets. However, the patent does not describe any external camera that would allow for more robust head tracking through space.

Elsewhere, the patents lend credence to previous reports that the Nintendo Switch will feature a touchscreen that can “detect position, pressure, or other characteristics of touch.” The patent says this is currently a capacitive multi-touch panel, but it could be a resistive, single-touch display in the final unit.

Part of the patent gives credence to earlier reports that one of the JoyCon controllers “includes an infrared image capture section…to detect a hand movement and/or gesture” a la the Nintendo Wii. There is also mention of SD card storage for the system itself and two shoulder buttons on each JoyCon controller, as previously rumored. And the patent discusses a “symmetrical” USB connection between the dock and the tablet (and the “power connector”), suggesting that previous reports of USB Type-C charging for the system are also true.

Perhaps most strangely, the patents describe a fanciful way to authenticate users by “captur[ing] an image of a user’s hand (specifically the vein pattern of the hand) through infrared imaging.” The technology described would also be able to measure a user’s pulse using IR light, allowing memories of the vaporware Wii vitality sensor.

There’s a lot of information to think about in these lengthy and detailed patent applications, but the above covers the most interesting unknown and/or unconfirmed highlights we’ve encountered so far. We’ll presumably get final confirmation on at least some of these features when Nintendo reveals more Switch details on January 12.