Nintendo Switch launches worldwide on March 3, $299 in the US |Techilink 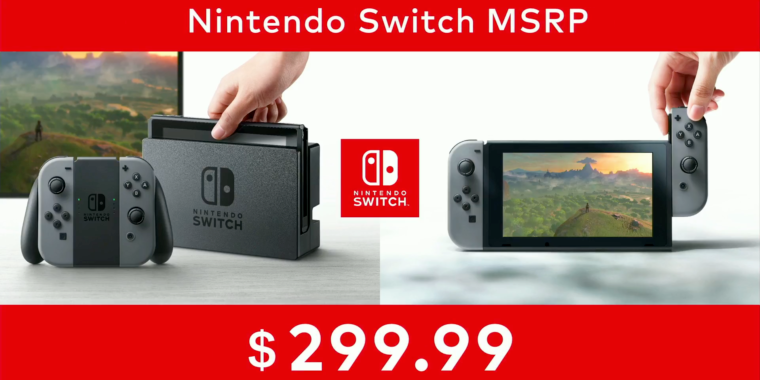 The Nintendo Switch will launch on March 3 in Japan, the US, Canada, “major European countries” and Hong Kong, Nintendo announced in a Japanese presentation late Thursday night. The system costs $299 in the United States, 29,980 yen in Japan, and costs vary by retailer and country across Europe.

In terms of hardware, the system’s 6.2-inch capacitive touchscreen clocks in at a resolution of 1280 x 720. The system comes with 32GB of internal game storage, which can be expanded with standard microSD cards. Games will also be available on small cards, similar to those in the DS line.

Battery life for the system in portable mode ranges from 2.5 to 6.5 hours depending on the game. “For example, The Legend of Zelda: Breath of the Wild can be played for about 3 hours on a single charge,” Nintendo writes on its website. The system is charged via USB Type-C.

Nintendo also announced that the system will not be subject to a region lock and that all software would work on systems released in all countries.

A “charging grip” accessory, which combines the Joy-Cons into a larger controller while keeping them charged, costs $30. Additional TV docks, with included HDMI cable and charging adapter, sell for $90. Additional Joy-Cons are available for $50 each, or $80 in a matched left-and-right pair. A separate Pro Controller, which is very similar to a standard Xbox or PlayStation pad, is also available for $70.

In addition to Wi-Fi internet connectivity, “up to eight Nintendo Switch systems can be connected for local wireless multiplayer games,” Nintendo said. Up to eight Joy-Con controllers can also be connected to a single console, which: could theoretically mean local chaos with 64 players with plenty of Switch hardware to hand. However, after the video presentation, Nintendo quietly announced that a paid subscription is required to play the Switch online.

The Joy of Joy-Con

The Switch’s “Joy-Con” controllers, which slide off the side of the capacitive touchscreen tablet for free-standing play, will feature a motion IR camera that Nintendo says can detect the distance of a hand placed in front of it. held, and “tell the difference between rock, paper and scissors” on that hand. The system also uses what Nintendo calls “HD rumble,” which allegedly allows players to differentiate between “the number of ice cubes in a virtual glass” and the water that fills that glass.

A ‘capture’ button on the left controller will allow players to save and share screenshots of Switch games, although video capture and sharing will only take place ‘in the future’. An NFC reader on the right Joy-Con controller provides Amiibo connectivity.

Two games have been announced to specifically show off some of these Joy-Con features. 1-2 Switch is a collection of minigames focused on casual local multiplayer sharing available at launch. weapons is a simplified fighting game with a directional, extendable boxing glove controlled by Joy-Cons, held and moved in each hand, available in the spring.

A new open-world Mario game titled Super Mario Odyssey, is scheduled for lunch in the 2017 holiday season. The Legend of Zelda: Breath of the Wildon the other hand, will be available on March 3 alongside the Switch.

A sequel to the Wii U favourite splatoon, dubbed splatoon 2, will also be available for the Switch in the summer. New levels and weapons will be available in the original game and as additional DLC after launch.

EA was on hand to announce the next one FIFA game would come to the Switch. Bethesda was there to confirm that Skyrim would eventually be ported to Switch. A Sega representative, meanwhile, simply said, “we will be considering new games for Nintendo Switch and will be presenting them shortly.” Our very own Sam Machkovech has a more complete account of the Switch software we know so far.