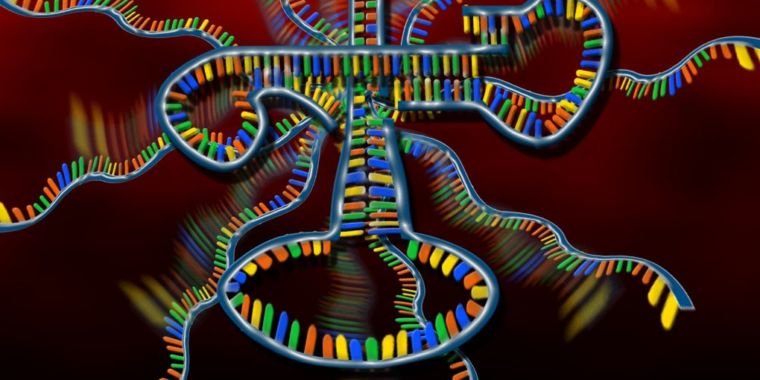 Physics is full of articles where the authors actually do nothing – at least nothing empirically. Instead, they explore the math behind a topic and try to gain new theoretical insights, leaving it up to someone else to find out if their insights are actually reflected in real world behavior.

But physics doesn’t have a monopoly on this, and there are plenty of articles in biology that are full of math and examining how a theoretical population would behave. One area where that has had a profound impact on thinking is studying the origin of life, where researchers have struggled to understand how a series of simple carbonless molecules could find their way into something more like a cell. Now two Japanese researchers have taken some of these theoretical ideas and demonstrated that they can be sustained in a real biochemical system.

This could potentially form a barrier to adding new functions to these molecules, as new functions would involve additional RNA, increasing the likelihood that a mutation somewhere would render the RNA unlivable.

Theoretical biologists solve this problem by proposing a division of labor. Rather than one large molecule with many functions, they suggest that early life had a large population of RNA molecules, with several copies of each type. This means that damage to one molecule would still allow others of that type to function. And by having multiple types of molecules, you could let each type develop new or more sophisticated functions individually.

But that creates a new problem: selfish RNA. An RNA inactivated by a mutation can still be copied, so it’s possible for “cheaters” to evolve — RNAs that don’t perform a useful function, but still consume resources while being copied. Impostors in mathematical simulations eventually reach sufficiently large portions of a population of self-replicating molecules that the population as a whole shuts down and stops replicating.

But if simulations have identified the problem, they have also helped us find a possible solution: cells. By dividing a large population of self-replicating molecules, cells increase the likelihood that some of the small, divided populations will replicate without any disabling mutations. Because each cell competes with all the others, those that can continue to replicate will eventually outperform their peers.

This all looks reasonable on paper. But does any of it work in the real world? Ryo Mizuuchi and Norikazu Ichihashi of Osaka University devised a system to find out. It contains all the proteins used by bacteria to translate an RNA into protein. While the first cells didn’t have anything like this vast collection of proteins, this is meant to be a model system for testing ideas, and the proteins make things simpler. These proteins were placed in “cells” formed by hitting a mixture of fat and water with a high-energy sound, causing the fats to form small spheres around some of the water/protein mixture.

The system was then provided with two RNAs. One coded for an enzyme that could copy the RNA molecules. The second coded for an enzyme that prepared individual RNA bases for use by the first. If both RNAs were present, the system would translate them into proteins that, when combined, would cause the RNAs that coded for them to replicate. After replication had timed out, the “cells” were supplied with more fat and raw materials, and beat with another blast of sound. This caused the replicated molecules to spread and start over.

So while the system isn’t fully self-replicating—a lot of material needs to be supplied—the two RNA molecules can do their own duplication. This allowed Mizuuchi and Ichihashi to track them across multiple generations of duplication, tracking their population dynamics and evolution.

And to a large extent, the system showed that the theoretical ideas held up well in the real world (to the extent that this two-RNA system model reflects something “real”).

First, Mizuuchi and Ichihashi found that the initial conditions really matter. If there is a very low starting number of RNAs in each cell, the explosion of sound intended to freshen up the conditions would simply start diluting the functional RNAs. The population would soon grind to a halt. Too big a starting number, and soon cheaters would appear in every cell, gradually coming to a halt. This lasted a little longer, but was equally deadly.

At a point between the two, the average number of RNAs per cell generation after generation would remain within a narrow range. In other words, it confirmed some theoretical ideas and gave the researchers an opportunity to examine the evolution of cheaters.

Even in a population where the number of RNAs is in the “just right” range, cheaters evolve. But they only include a small enough number of cells that the cell population slurps on. And by doing this, the RNAs pick up on changes and evolve.

Mizuuchi and Ichihashi found that this evolution is a bit complicated. The mutations that the RNAs pick up are selfish, in that they are copied more efficiently than the starting RNAs. Each evolved RNA also finds ways to harness its resources, reducing their original partner’s replication when tested together. This selfish behavior means that the pair of RNAs (one evolved, one original) tend to replicate more slowly than the original pair.

But when two evolved RNAs are paired, the replication rate is higher than any other combination. It seems that each RNA has evolved to adapt to its partner’s selfishness, keeping the system duplicating at a rapid pace.

This work has limited direct application to the origin of life, as it is thought that proteins were either small and limited or were not present at all. But the system Mizuuchi and Ichihashi devised is enough to test some of the proposed theoretical ideas, making it a valuable tool for understanding which ideas are worth pursuing more vigorously.