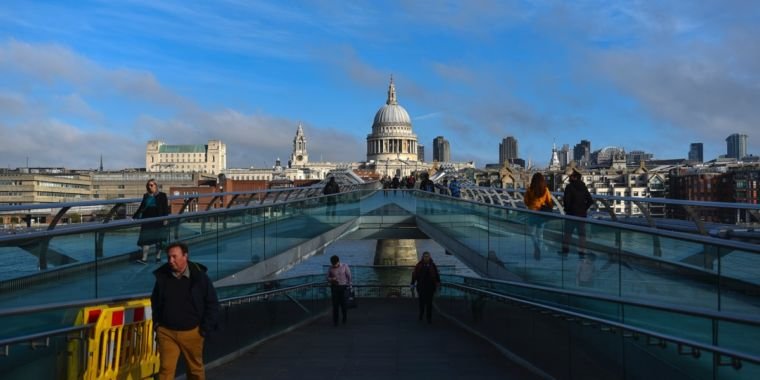 When London’s Millennium Bridge first opened in June 2000, the city was alarmed to find that the movement of the crowd of pedestrians crossing the bridge was causing significant shaking and swaying. Londoners nicknamed it “Wobbly Bridge”. Officials closed it after just two days, and the bridge remained closed for the next two years until the necessary changes could be made to stop the swinging.

It’s not an entirely unknown phenomenon: there’s an 1873 sign on London’s Albert Bridge warning military troops to break their usual lock-step motion when crossing. The culprit was not the Millennium Bridge’s design. Rather, it was due to a strange synchronicity between the lateral (sideways) swing of the bridge and pedestrian aisles.

A new paper in Biology Letters sheds more light on this by simulating the biomechanics of large crowds of people walking on a bridge. While there have been many different approaches to studying these fascinating dynamics over the years, including a lab-based treadmill recreation of people walking across the Millennium Bridge by University of Cambridge engineer Allan McRobie, this is one Significantly improved model of how people adjust their gait when walking on wobbly surfaces, according to co-author Varun Joshi of Ohio State University. It suggests that you may not even need sync to cause the shaking.

It turns out that people walking on a bridge that begins to shift instinctively adjust their stride to the swaying motion of the bridge as it swings sideways. This will be familiar to anyone who has tried to walk on a fast-moving train and had to find a foothold as the train wobbled back and forth. But on a bridge, this exacerbates the problem, giving rise to extra small lateral oscillations that amplify the sway.

The result is a positive feedback loop (the technical term is “synchronous lateral excitation”). Get a large enough crowd to adjust their stride to the movement of the bridge, and the swaying can become dangerously violent, as happened with the Millennium Bridge. About 90,000 people crossed the bridge on opening day, with about 2,000 people at any one time.

“Wobbling and synchrony are inextricably linked. They come together once the crowd has reached a critical size.”

It is an example of an emerging collective phenomenon. In fact, Cornell University mathematician Steven Strogatz co-authored a 2005 Nature paper with McRobie and two others who modeled the dynamics of the Millennium Bridge as a weakly damped and driven harmonic oscillator. According to Strogatz, the bridge was driven to swing sideways by the pedestrians as they walked across it. “Their periodic footsteps pumped energy into the bridge and caused it to move from side to side, forcing people to adapt their gaits to the movement of the bridge,” he says.

Over time, the pedestrians unintentionally became involved, causing the bridge to wobble even more. The spontaneous synchrony of the crowd was similar to what happens with the highly synchronized flashes of fireflies or the firing of neurons in the brain. “Wobbling and synchrony are inseparable,” Strogatz et al wrote. “They appear together as dual aspects of a single instability mechanism, once the crowd reaches a critical size.”

As for this latest paper, “The authors use a much more realistic and biomechanically inspired model of human walking than my colleagues and I were able to collect in 2005,” Strogatz says. “At the time, very little was known about how people adjust their gait when walking on a surface that moves beneath their feet, as the Millennium Bridge did when it wobbled back and forth on opening day.”

In a 2015 simulation, Joshi and his co-author, Manoj Srinivasan — both of whom have backgrounds in studying human locomotion — found that people in sync with a side-swinging bridge lower the metabolic energy costs of movement. So it was a natural reaction, they reasoned, for people to synchronize their gaits with the movement of the bridge. However, this model did not take into account the energy costs to stabilize walking.

Their latest research looks at a different biomechanical principle. Humans are so-called “stable” walkers. We want to walk without falling and will make adjustments based on the feedback we get from our environment. Since “humans are top-heavy objects, often modeled as an inverted pendulum,” the authors write, we need that feedback to stabilize us; otherwise we would lose our balance pretty quickly. So they incorporated that feedback into their simulations.

“The bridge can wobble even with a lower number of pedestrians. The crowd doesn’t synchronize, but the bridge starts moving spontaneously.”

The improved model correctly predicts some phenomena that the 2005 model could not explain, such as the wobbling of pedestrian bridges, even in the absence of this mass synchronization. Also, the onset of crowd synchrony and the onset of bridge wobble are not simultaneous. They occur in different numbers of pedestrians.

“In our model, crowd synchronization and bridge wobbling always went hand in hand; in their model, they can co-exist, but they don’t have to,” says Strogatz. “It is only when there are enough people on the bridge that the crowd will be synchronized. The bridge may start to wobble even at a lower number of pedestrians, in which case the crowd will not synchronize, but the bridge will start to move spontaneously.”

As for metabolic energy costs, once the virtual bridge started to vibrate, the simulated walkers widened their strides — a much less energy-efficient gait. But the authors argue that, over time, people might figure out how to minimize energy use.

They then hope to incorporate audience dynamics into their simulations. “We have all these individual bipeds walking on a bridge, but they can only communicate with each other through the bridge,” says Joshi of the current model. In reality, for example, people try to avoid collisions with others or suddenly change direction. Ultimately, he hopes to learn more about the biomechanics of how we can adapt so quickly to unusual situations, such as a moving surface.

Engineers solved the Millennium Bridge’s pendulum problems by retrofitting the structure with 37 energy-dissipating dampers to control horizontal movement, and another 52 inertial dampers to control vertical movement. The bridge hasn’t had a significant wobble problem since it reopened in February 2002. But a fictional version was destroyed by marauding Death Eaters in the 2009 film Harry Potter and the Half-Blood Prince.

This is a pretty decent fictional representation of a different bridge dynamic, reminiscent of the infamous collapse of the Tacoma Narrows Bridge (aka “Galloping Gertie”) in 1940. For years, the popular explanation of what happened was forced resonance: the strong wind matched the bridge’s natural resonant frequency and the resulting positive feedback loop became so strong that the bridge broke apart.

It was actually a bit more complicated than that. A phenomenon called “vortex shedding” caused the bridge to wave (or gallop). Those undulations broke one of the suspension cables, so the bridge was skewed and began to rotate along its center axis along with the galloping motion. Technically it’s known as aerodynamically induced self-excitation or “flutter” – a self-perpetuating vibrating feedback loop. Each turn of the bridge increased the effect of the wind instead of damping it, until the accumulated energy became so strong that the entire structure collapsed.

The specific circumstances may be different, but in principle we see that in the Harry Potter scene. Death Eaters take out key structural supports, causing the bridge to gallop and twist, and the resulting feedback loop becomes so strong that a center portion of the bridge collapses.

Death Eaters may be fictional, but the complicated real-world dynamics between bridges and the pedestrians walking over them are not. That’s why so many scientists remain fascinated by the problem. The better we understand these dynamics in general, the better (and safer) future bridge designs will be.