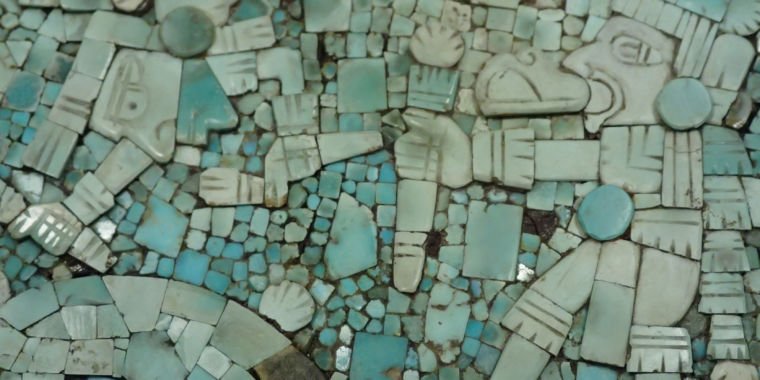 New chemical analysis of Aztec turquoise artifacts suggests the stone didn’t come from the southwestern US, as archaeologists have long believed, raising questions about the extent of long-distance trade between the Aztecs and their northern neighbors.

For thousands of years, societies from Central America to the US Southwest have valued turquoise for its unique blue-green color. Archaeologists and historians have believed that the Mesoamerican states got their turquoise through long-distance trade with people in the American Southwest. It made sense, as archaeologists have found macaw bones, cocoa, and copper bells in sites across the southwestern US — not in large quantities, but enough to show that at least some trade took place after 900 CE.

And there are still turquoise mines in the American Southwest in areas that have been mined since pre-Columbian times. Meanwhile, there are no turquoise mines in Mesoamerica, but there is an abundance of stuff in Aztec artifacts. At the height of Aztec imperial power, known as the late postclassical period from 1430 to 1519, the stone was a favored ornament for ceremonial shields and sacrificial weapons, mirrors and jewelry. That includes items such as bracelets, necklaces, earrings, and nose plugs worn by Aztec rulers, priests, and nobles. Turquoise – what the Aztecs called xihuitl-was so important that it played a part in Aztec cosmology and was often mentioned in poems.

A 16th-century Aztec document called the Codex Mendoza records tribute paid by conquered provinces to the Aztec capital. It lists shipments of turquoise from three provinces: one in parts of the modern Mexican states of Guerrero and Puebla and one in the western part of present-day Oaxaca, along with a third province in northern Veracruz, which was the far northeast at the time. corner of the Aztec Empire.

The logical assumption is that the Hohokam, Mogollon, and Pueblo peoples of the US Southwest traded their local turquoise for goods from Mexico and further south, so the provinces in the Codex Mendoza imported the turquoise they sent as a tribute. But it turns out that the chemical characteristics in Aztec and Mixtec turquoise tiles don’t match those of Southwestern American rocks; they actually correspond to Mesoamerican rocks.

Turquoise forms near copper deposits when water laden with copper and aluminum filters through rock. Therefore, turquoise veins usually form at the edges of large copper deposits. So as the surrounding rocks weather, their particles eventually contribute to the formation of turquoise, and the turquoise inherits its chemistry from those rocks. Geologists can get a rough idea of ​​where a piece of turquoise comes from by comparing its chemistry to that of rock formations; specifically, they look for ratios of isotopes of the elements strontium and lead.

Geologist Alyson Thibodeau of Dickinson College and her colleagues tested the lead and strontium isotope ratios in 38 turquoise mosaic tiles, or tesserae, of buried sacrifices in the sacred area of ​​Tenochtitlan, the political and ceremonial capital of the Aztec Empire. Most of the 1-5cm tiles were 15th-century offerings to the war and sun god Huitzilopochtli, buried in the southern half of the Templo Mayor – an area symbolically linked to the god Xiuhtecuhtli, a fire god also known as the Turquoise Lord. They also tested five tesserae of Mixtec mosaics, although archaeologists are unsure of their original context.

In general, the ratio of strontium-87 to strontium-86 in the local rock decreases as you move from Arizona to the state of Guerrero in western Mexico (formerly called the Aztec province of Quiauhteopan in the Codex Mendoza). In southeastern Arizona that ratio is above 0.708 and in Guerrero between 0.704 and 0.705. Most Aztec tesserae had strontium isotope ratios ranging from 0.705 to 0.706 — far too low to get out of Arizona.

The proportions of lead isotopes in the Aztec tesserae overlapped the proportions in turquoise deposits in the US Southwest, but in general they were much closer to those in the state of Michoacán, just west of the former Aztec capital. The isotope ratios could also be a good fit for copper deposits in the states of Guerrero, Jalisco or Veracruz – a list of possibilities that includes the provinces included in the Codex Mendoza.

While the presence of cocoa, macaws, etc. in the Southwest provides undeniable evidence of long-range interaction, the volume of Mesoamerican items in the Southwest is not so great as to require the existence of large-scale exchange networks that amounts of materials between the two regions,” Thibodeau told Ars Technica. “While perishable materials such as cotton can be traded south, it’s also possible that there was not a major flow of commodities from the Southwest into Mesoamerica.”

Thibodeau and her colleagues want to study turquoise samples from other Mesoamerican cultures — including the Toltecs, Maya, Mixtecs and Tarascans — to better understand how pre-Columbian economies mined, traded and used turquoise.

“I hope this work sparks a new discussion about — and is not the last word on — the role of turquoise in long-range interactions between Southwestern and Mesoamerican civilizations,” she told Ars Technica.